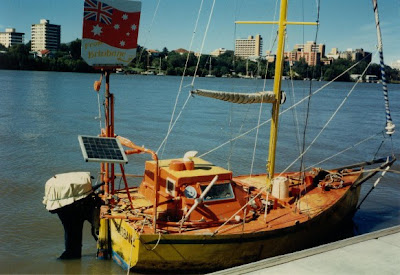 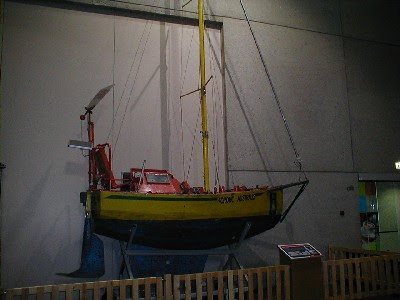 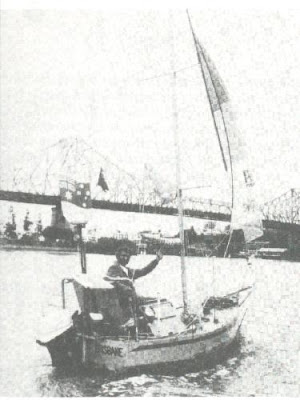 Serge Testa currently holds the world record for circumnavigation in the smallest boat, his Acrohc Australis, which he designed and built himself. 11' 10". He set out from Brisbane in 1984 and returned to Brisbane in 1987. He chronicled his amazing feat in a glorious little book titled 500 Days. The boat now resides in the...Museum in Brisbane ( all photo's courtesy Bill Seargent@ SmallSailboats UK.) I've written Serge to find out what he's up to these days but haven't heard back, yet. At least I know this: After his circumnavigation, Serge and his brother Silvio built a proa in the true Polynesian style in the Phillipines and attempted to cross the Pacific to prove that ancient migration to the "new" world could have been made by boat as well as by land. Plagued by underfunding, the trip was abanonded 1/2 way to it's destination in Japan. serge continued his sailing pusuits, crewing for other's and made his way to an Francisco where he met and married his wife Robin. Together they built a new boat, a 60' steel yacht  named Encanta, in which they sailed around the world between 1993 and 1997. Serge's record is set to be challenged by some folks building super/micro  cruising boats. Maybe. If they actually do it.
We'll see.

Posted by Thomas Armstrong at 10:00 PM