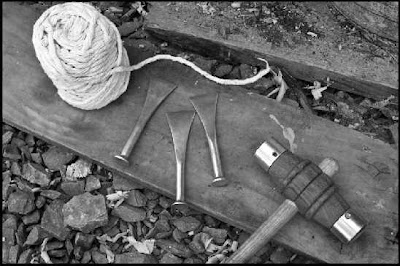 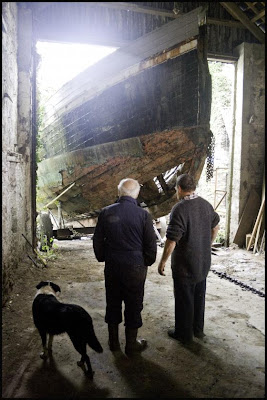 Gene O’Neill and Fachtna O’Sullivan supervise the AK Ilen into her new home, an old grain store on the banks of the River Ilen. 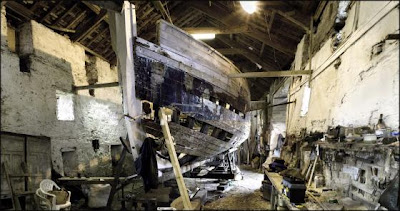 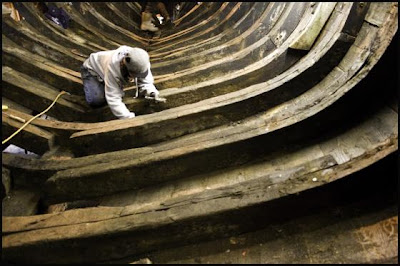 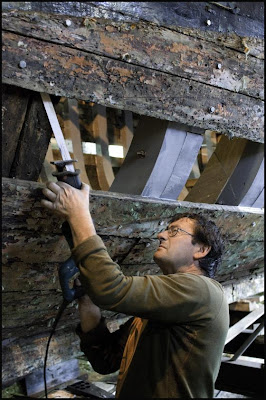 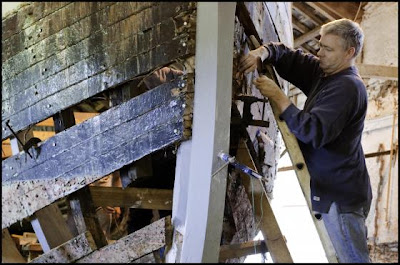 Gary Mac Mahon working on the stem of the AK Ilen 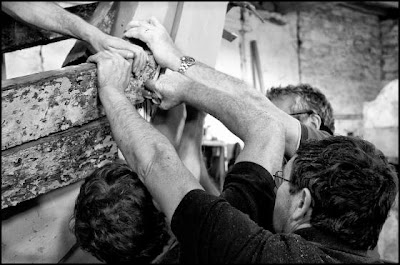 Many hands working together to re attach planking to stem 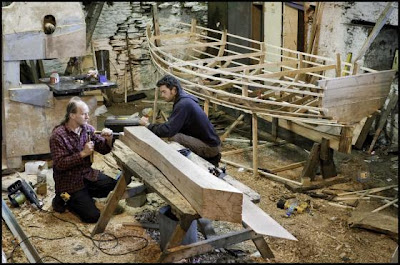 Cutting stern post tenon AK Ilen Restoration, in the background is a John Hegarty punt with frame moulds and battens in place, ready for framing. 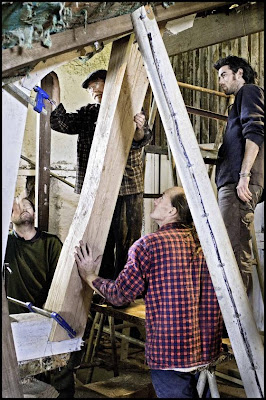 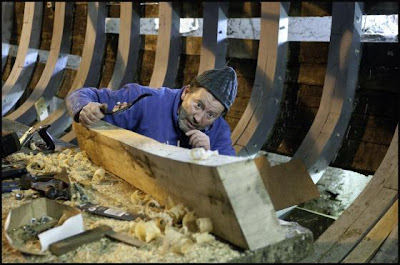 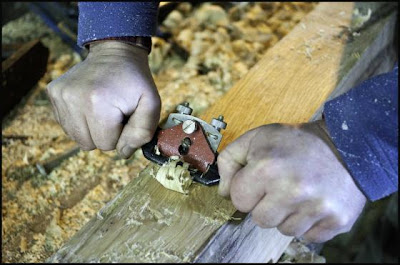 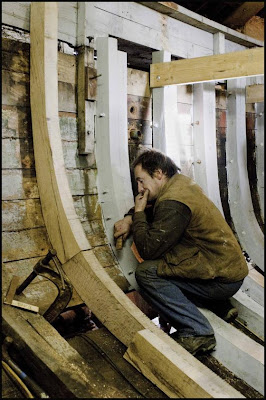 John Hegarty frame No 16 Port side 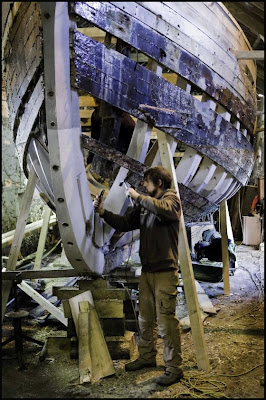 Kieran Clancy, a workshop participant, setting up frame No1 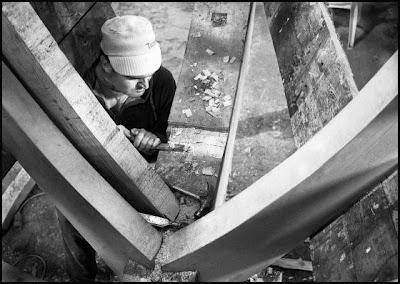 Fitting of frame No. 1 to the ketch Ilen 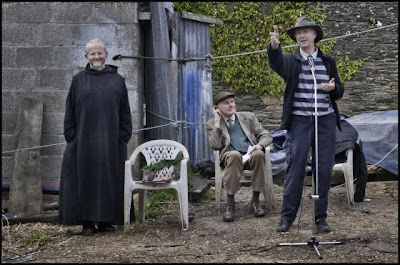 Framing Out Ceremony May 2010
Br. Anthony Keane – Forester of Glenstal Abbey, Sir Cosmo Haskard – Falkland Islands Governor-General and Dr. Edward Walsh speaking about his role in the repatriation of the good ship Ilen. 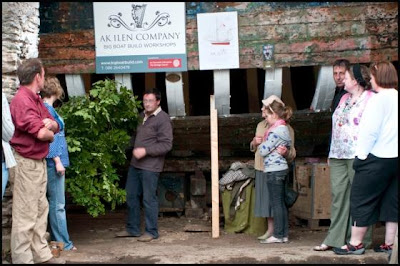 Liam Hegarty Master shipwright holds a branch of an Irish Oak tree to symbolize growth and bring luck to the project and the good ship Ilen. 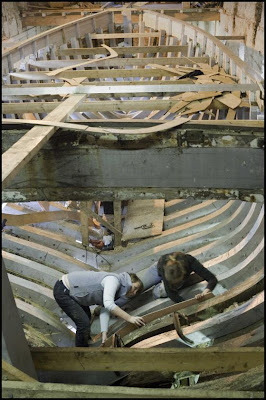 Looking down and forward into the AK Ilen fitting a mould / template No 21 above on the temporary deck beams used moulds are stored. 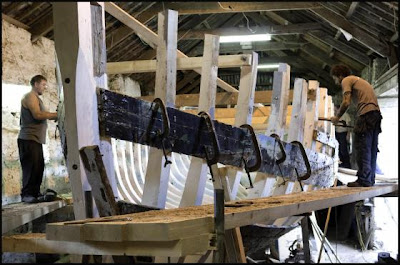 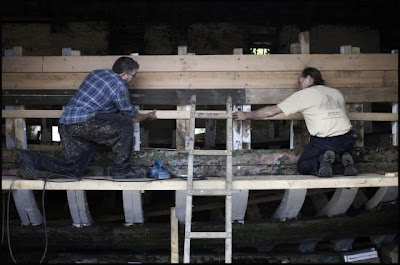 After fairing the frames a spiling batten is bent and twisted into position on the hull, it is tacked to the hull adjacent to the plank you plan to fit a new plank against. 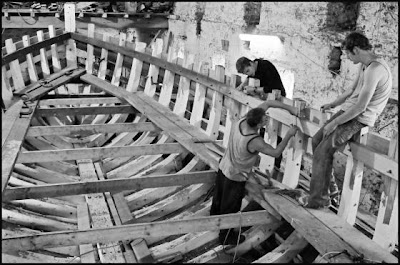 The Ilen is now much stronger again as the top of each frame had been fixed between the sheer strake (the top plank) and the beam shelf. 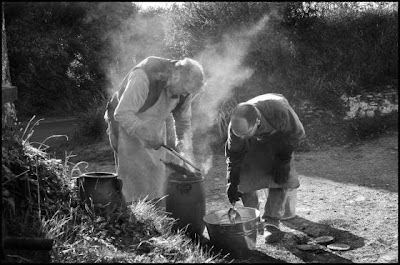 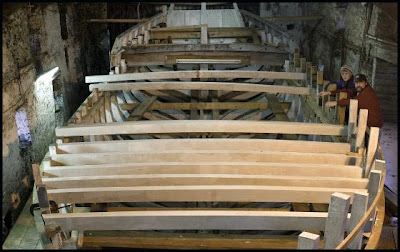 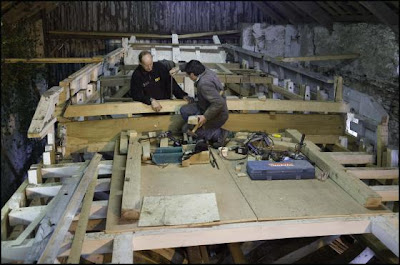 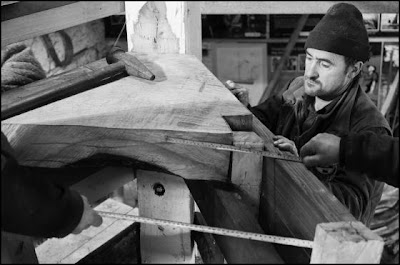 Fitting the Breast Hook, used to strengthen the bow of the Ilen, positioned horizontally across the bow. 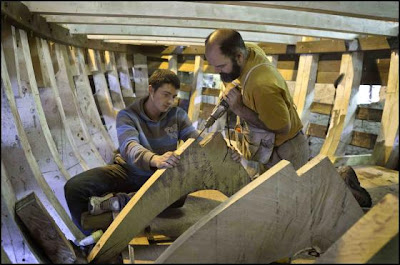 Paddy Hegarty and Tim Lee working on the Hanging Knees which will support the main deck mast beams.
Instructor Tim Lee is from the North West School of Wooden Boat Building, Port Townsend Washington USA, has been invited to work on the AK Ilen Project. 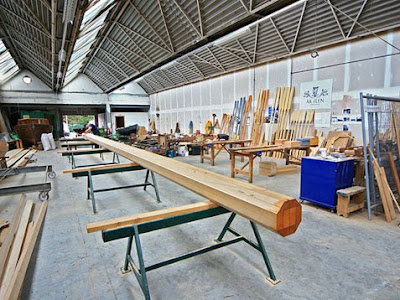 All photos an captions courtesy Kevin O'Farrell except as noted

The Ilen returned to her birthplace, the river Ilen in 1998 like a spawning salmon. She was deposited on the hard at the Hegarty Boatyard, and remained there for a decade while ownership and funding issues were negotiated. The elements took their toll on her during this time, and when, in April of 2008 she was ferried around to the old, immense corn 'shed' at Hegarty's she was in need of some tlc. A little more than that, really. She is basically being rebuilt from the keel up. The original keel and keelson have been saved, along with a few of her original frames. For the rest she is a reconstruction with new replacing the old. It's a huge project and still underway, though inching closer to completion.
The team leading the restoration are Liam and John Hegerty and Fachtna O’Sullivan, all shipwrights at the Hegeraty Boatyard, one of the last surviving traditional boatyards in Ireland.

Their work is being overseen by the Irish Department of the Marine so the Ilen can work as a Sail training ship. This gets to the heart of this project. Not just a restoration project, but one keenly oriented toward education and preservation, not just of this one boat but taking a wider view to the preservation of traditional boatbuilding and sailing skills, with an eye to the survival and perpetuation of Irish maritime heritage. One innovative way the restoration project is moving forward is through the Big Boat Build Workshops, which both help to fund the restoration and offer public access to folks who wish work on the Ilen, learning boatbuilding skills from the masters at the Hegarty Yard. Críostóir Mac Cárthaigh has been a participant. The editor of 'Traditional Boats of Ireland' has this to say about the workshops:


Big Boat Build - Participant Testimonial
"For more than a year I had promised myself a three-day excursion to Baltimore for the Ilen
workshop, Ireland’s largest wooden boat build. I have followed her progress for some time, on
one occasion spending an afternoon in the company of her one-time skipper, Falkland Islander
Terry Clifton, a wonderful man who, sadly, has since passed away. First stop was the Oldcourt
Inn where I was just in time to receive a bowl of delicious seafood chowder from Anne and to
meet the other workshop volunteers – Michael Ruane from Wexford, Eddie Cleary from
Tipperary, local man and former fisherman Bill Roycroft of Mizen Head, Dublinman Jim Murphy
and Dermot Falvey of Cork.
This motley crew had already begun work earlier in the day, so I had some catching up to do.
No problem. Outside the great venerable grain store housing the skeleton of the Ilen in
Hegarty’s Boatyard, we gathered to hear Brother Anthony describe the particular qualities that
make oak such an indispensable material in boat construction. His lucid talk veered from the
technical to the sacred as he explained oak’s strength and durability, as well as its enduring
position in Irish history and mythology.
Having been introduced to the mysteries of oak, it was then time to begin the work of cutting
and sculpting this hardy material to match the old oak frames of the Ilen. Barely audible
whispers, mutterings and body movements were being exchanged by the three experienced
shipwrights, brothers Liam and John Hegarty, and Fachtna O’Sullivan. Selecting suitable lengths
of beautiful Irish oak from which to cut the individual scantlings and futtocks was a task not to
be rushed. Fachtna disappeared repeatedly into the bowels of the old Ilen at this stage of the
process, emerging each time clutching a handful of bevels and carefully marking each massive
length of virgin timber prior to cutting it on the band saw.
Never was the saying ‘Many hands make light work’ more apt than when applied to the
rebuilding of the good ship Ilen. For there was indeed much heavy work involved in unfastening
and removing her old timbers and replacing them with new ones. What was striking though,
was the good humour of all throughout the work. I had wondered would the presence of
inexperienced men and women unnerve or annoy the shipwrights. As I tip-toed from frame to
frame, at times swaying about unsteadily, there was no rebuke from the sure-footed shipwrights.
Not at all, all three of them displayed admirable patience and good humour, pausing
occasionally to listen to a story or to exchange good-humoured banter. Before I finished up on
the Friday, I was convinced that not only did these shipwrights appreciate our assistance –
however inexpert – they enjoyed too the colour and the banter and energy we brought with us.
All of us novices were grateful too for the chance to contribute to this remarkable project, in
this extraordinary place. By Friday afternoon we had helped to complete two frames and we
were mighty pleased with ourselves. Roll on the next workshop!"
Críostóir Mac Cárthaigh
National Folklore Collection, University College Dublin
Dublin 4

The work continues today, though it's nearing completion.
I have been investigating the feasibility of organizing a group from North America to venture over to Baltimore and get in on the action, while there's time left to do it. Gary MacMahon has indicated that the AK Ilen Company would be very receptive to such a group. Any readers who think they might be interested in such an adventure should contact me via e-mail, zekeur at netzero dot net. Could be a great experience. I have no details yet, but would like to test the waters, let me know.

Next post I'll be looking at the Ak Ilen Company's origin and it's multifaceted educational, cultural and skills preservation outreach. Stay with me.

Huge thanks to Kevin O'Farrell for his beautiful photos and his answers to my questions about the 'build'.

Originally published by Thomas Armstrong in 70.8%

Email ThisBlogThis!Share to TwitterShare to FacebookShare to Pinterest
Labels: AK Ilen, Boatbuilding, Educational, Restoration, Traditional, Workboats
Newer Posts Older Posts Home
Subscribe to: Posts (Atom)
seventy point eight is the percentage of ocean to landmass on our planet. get wet...a rambling personal collection of news, books, images, ideas, and whatever else I find interesting relating to our aqueous environment..with an emphasis on small boats, sailing, boat design and designers and boatbuilding and builders, especially home builders. And a certain curiosity about seasteading. Header photo:'Salarøy' is a 41' fembøring, a Norwegian workboat inTromsø Norway. Courtesy Hildringstimens båtgalleri - http://www.hildringstimen.no/batlista.htm