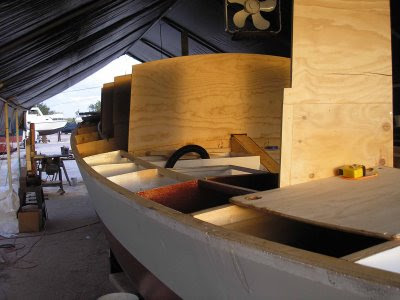 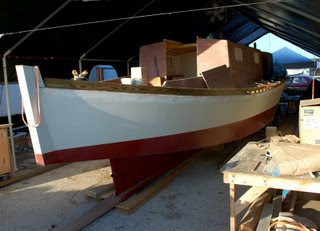 I'm sure most of my readers are familiar with Reuel Parker of Parker Marine. If not, you should be. Much like Iain Oughtred, he's adept at taking traditional working craft and adapting them to modern usage and construction. He's building a prototype of his new design Ibis and has had some conversation about this new darling with Scott Williams. to wit:
"Reuel Parker is building the first prototype of his new line of (BIG) trailerable boats in Florida: a double-ended sharpie schooner based on the Straits of Juan del Fuca mackeral-fishing sharpies of Washington State in the 1880's. The new sharpie is 45' on deck, 10' beam, 2'6" draft, 15,000 lbs displacement, with an unladen trailer weight of 12,000 lbs. She is a bald-headed gaff schooner, with self-tending sails."

That's the blurb and there's some really interesting conversation between Scott and Reuel on Scott's blog. It's good. Scott is a boatbuilder himself, an adventurer with a personal exploration of the Caribbean in a kayak under his belt and the author of several books on kayak exploration of his native Mississippi, the Caribbean, and general rants about culture and disaffection with modern life. Look.

Posted by Thomas Armstrong at 10:56 PM