Operation Dynamo and the Little Ships of Dunkirk 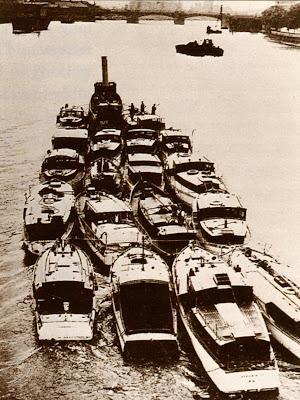 A barge or tug tows a flotilla of Little Ships down the Thames to Ramsgate.
courtesy Sea Scout Minotaur 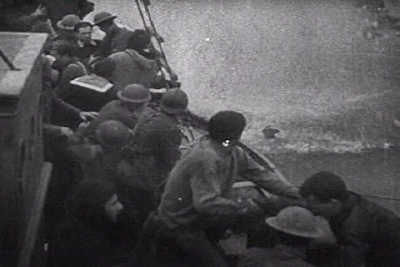 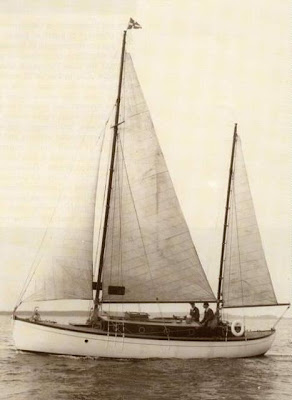 Few true sailing craft were involved. Windsong was one, shown here in then and now photos, a highlight of the ADLS website. 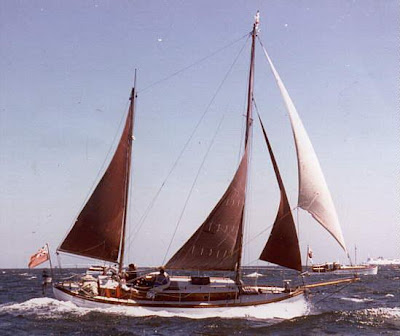 The website also supplies copious information about each member/boat, here's an example:

The only surviving David Hillyard sailing yacht to take part in 'Operation Dynamo' - and one of the very few pure sailboats, rather than motor-sailers, Windsong was not ideal for evacuating troops off a beach. In the light airs prevailing on 1st June and with only a small Ailsa Craig auxiliary engine, she was neither fast nor very manoeuverable. She must have been at considerable risk working close inshore amid bombing, shellfire and a host of every conceivable kind of ship, going in every direction.

She had not been requisitioned by the Royal Navy prior to 'Operation Dynamo', as had the majority of the 'Little Ships'; her owner had laid her up for the duration at Hillyards yard in Littlehampton on the South Coast of England. However, in response to the broadcast request for every kind of craft to be made available, her owner, Mr. G.L. Dalton, made her ready for sea, and on the 31st of May sailed her to Dover and reported at 1840 that he was "ready for sea and able to take thirty passengers" - which said more for his valour and patriotism than for the capacity of his vessel. He was told to report to Ramsgate and there in company with eleven other small craft, he was towed over to Dunkirk by the trawler Kinder Star. In David Divines' book their arrival is described by Mr. Dalton: 'We were on the point of making for the beach when we were heavily raided by dive-bombers, one large salvo just missing our trawler. We were ordered to cut adrift and make back; it was every man for himself.'

Windsong was back in Dover at 2115 on 2nd June. At this point she was taken over by T.H. Falkingham and A. Barden; it is not clear if they were naval ratings or fishermen recruited for 'Operation Dynamo'. By any reckoning Mr. Dalton had by then been without sleep for over 48 hours and was probably in no condition to make another crossing of the English Channel. Clearly the replacement crew did, for a later document refers to T.H. Falkingham and A. Barden, both of Windsong, 'who volunteered and deserve a medal.'

After Operation Dynamo, she was formally taken over by the Navy. In company with Sundowner she went to Brightlingsea on the East Coast, where, under the command of a Mr. Birtwhistle (a solicitor called up for the duration), she was used as a patrol and mine-spotting vessel in the Thames Estuary.

Mr. Dalton did not retain ownership long after the war and by 1950 Windsong went to work for her living as a charter yacht. In the course of one of these she was caught in atrocious weather in the Channel. With all but the mizzen sail blown out and the auxiliary engine lifeless the skipper hoisted a distress signal which was eventually answered by the 600 ton German freighter SS Feronia. After a struggle a tow-line was passed, but in the course of this the Feronia's counter came down with a sickening crunch on Windsongs' stem post, leaving a scar she still bears today. The long tow at five kts up-channel then commenced, and although the tow-line parted twice, they eventually entered the Solent. By this time the Press were alert to the story, for the Feronia was the first German ship to enter Spithead since the end of the Second World War.

The fifth owner in Windsong's 'Blue book' was Lady Effie Millington-Drake, wife of Sir John, who was 'our man' in Buenos Aires at the time of the Battle on the River Plate. It was he who contrived to delay the departure of the German Battle Cruiser Graf Spee from Montevideo by a series of spurious radio messages, enabling the Royal Navy to reinforce Admiral Harewood's cruiser force waiting outside, so that they could successfully attack her when she left neutral waters. She was finally scuttled in the mouth of the river Plate to avoid falling into British hands.

The present, and thirteenth, owner of Windsong is Col. (Retired) M.N.V. Duddridge, OBE, who bought her in 1986. For six years he moored her in Holland and sailed extensively in Dutch waters and up the East Coast of England. In 1992 he and his wife sailed Windsong from her winter mooring on the river Maas to Cyprus in the Eastern Mediterranean. With the masts down the first month was spent in negotiating the rivers and canals (and the 209 locks!) of Belgium and France. At Marseilles the masts were stepped and for the next two months Windsong turned heads in the Mediterranean. Elba, Capri, the Corinth Canal and the Greek islands of the Aegean were all graced by the indefatigable old lady.

Seven years under the Mediterranean sun has caused Windsong's timbers above the waterline to dry and shrink alarmingly. However a major re-fit ashore has just been completed, which included some re-caulking, and a completely new paint scheme has restored her to her former glory, befitting of the sole representative of the Association of Dunkirk Little Ships in the most Easterly corner of the Mediterranean. 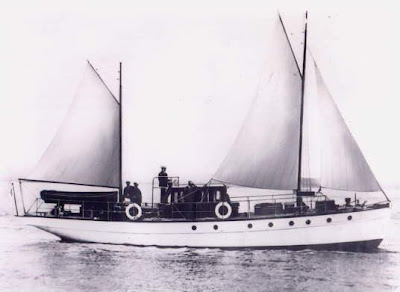 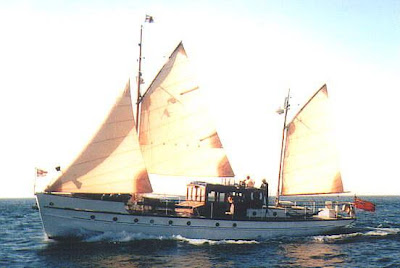 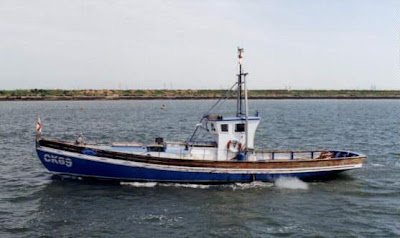 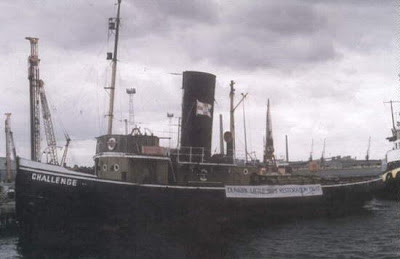 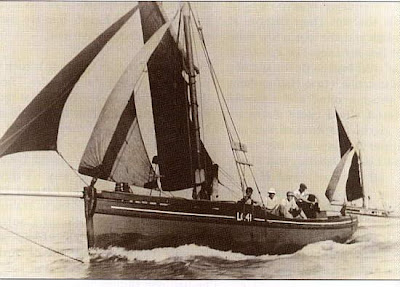 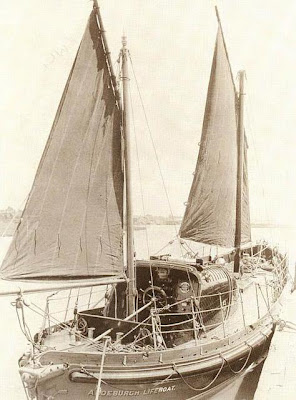 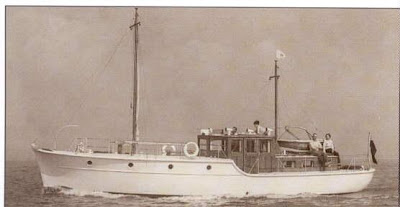 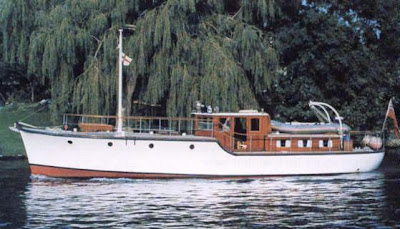 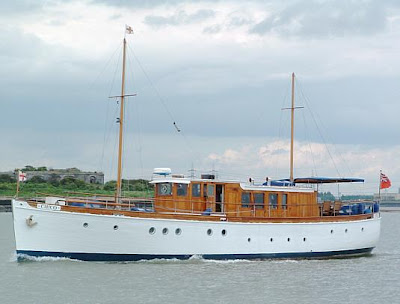 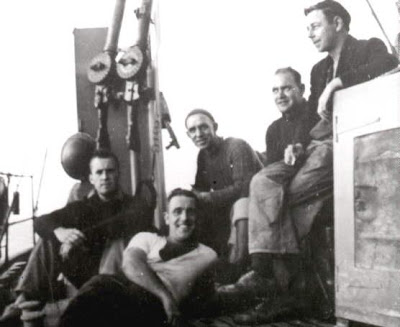 with rescued troops aboard. 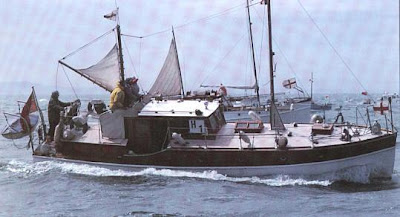 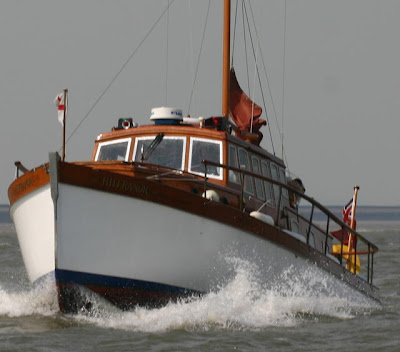 
Not usually one who is drawn to military exploits, I found myself totally arrested by this operation in which, during the early days of WWII, 700 private British boats were pressed into service to aid in the evacuation of hundreds of thousands British and French troops whose situation had become critical. A story of immense heroism and one which boosted British morale at one of it's lowest ebbs. Many of the boats owners insisted on sailing there boats into the fray.

This Wikipedia entry says it all.

The little ships of Dunkirk were 700 private boats that sailed from Ramsgate in England to Dunkirk in France between May 26 and June 4, 1940 as part of Operation Dynamo, the rescue of more than 338,000 British and French soldiers, who were trapped on the beaches at Dunkirk during the Second World War.

The situation of the troops, who had been cut off from their advance into France by a pincer movement from the German army, was regarded by the British prime minister Winston Churchill as the greatest military defeat for centuries; it appeared likely to cost Britain the war, leaving the country vulnerable to invasion by Nazi Germany.[1][2][3] Because of the shallow waters, British destroyers were unable to approach the beaches, and soldiers were having to wade out to the warships, many of them spending hours shoulder deep in water.

On May 27, the small-craft section of the British Ministry of Shipping telephoned boat builders around the coast, asking them to collect all boats with "shallow draft" that could navigate the shallow waters. Attention was directed to the pleasure boats, private yachts and launches moored on the River Thames and along the south and east coasts. Some of them were taken with the owners' permission — and with the owners insisting they would sail them — while others were requisitioned by the government with no time for the owners to be contacted. The boats were checked to make sure they were seaworthy, fuelled, and taken to Ramsgate to set sail for Dunkirk.[2]


The Association of Dunkirk Little Ships is an organization devoted to documenting, preserving and locating the boats involved in Operation Dynamo. There website is a testimony to the passions this moment of British history has engendered, and is a monumental effort by those involved. It is also beautifully realized, with lengthy biographies of the boats collected, and many photos of the boats then and now. I applaud not only the valor of those involved in Operation Dynamo but also the folks of the Association and the owners of these boats, both for preserving a moment of human dignity and the physical artifacts as well.

Note: I must say that I find the actions of both the participants in Operation dynamo and the member's of the Association inordinately inspiring.I stumbled across this website while researching Percy Mitchell, a gifted boatbuilder featured on Gavin Atkin's intheboatshed. I believe Percy was builder of one of the 'Little Ships' but cannot trace the link. Thanks to Gavin, and Percy, for opening this door for me.
Posted by Thomas Armstrong at 7:00 PM

very interesting. imagine going to war in a yacht.

In short, we must never forget. It just so happened I turned two on May 26, 1940 the day the little ships set out. Jasper

Nice collection of ships! I loved it! I think having some time into the water, is really becomes unforgettable moments.