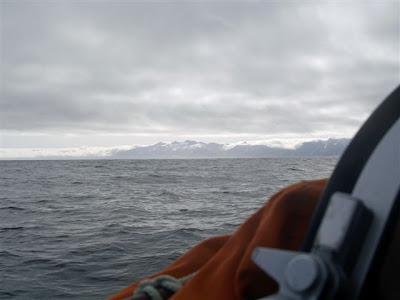 The mountains of south Jan Mayen 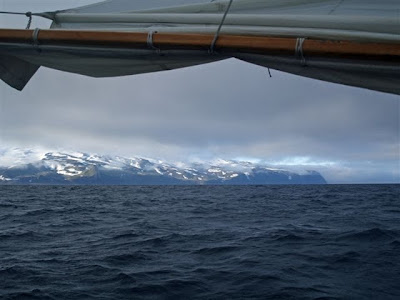 Sailing along the base of Mt Beerenberg, Jan Mayen 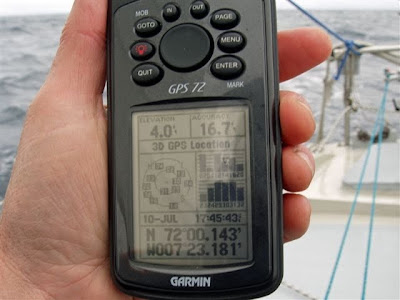 A proud moment as we reach 72ºN 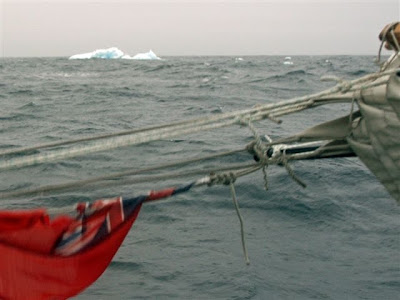 Amongst the bergs and bergy bits, 80 miles ENE of Scoresby Sound on the East Greenland coast 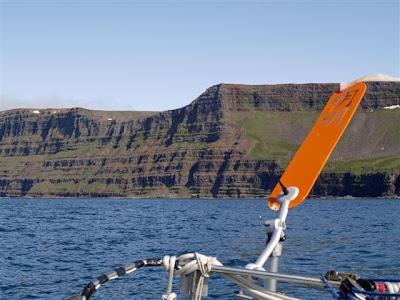 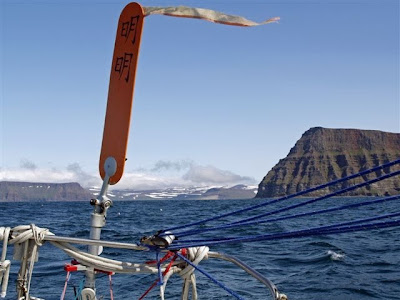 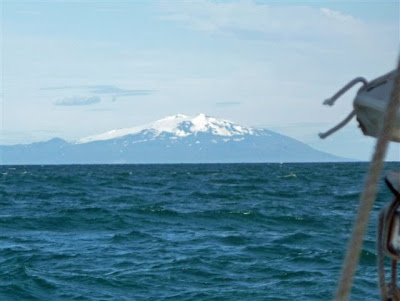 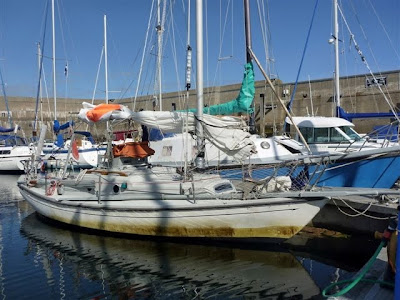 Back at Whitehills harbour, with 48 days at sea showing above the waterline.

Roger Taylor wrote me with a brief account of his voyage to the hinterlands of the north, the Arctic Ocean to be exact. He's outlined the journey for us here and I am passing it along verbatim:

"Left Whitehills Harbour on the Moray Firth, northern Scotland, at high water, 0200H on Friday 26th June. Ran up through the Fair Isle Channel, past Fair Isle, then outside Foula, the westernmost Shetland island. With settled weather from the east, though with occasional calms, I was able to lay down an almost straight track to Jan Mayen, which we reached 121/2 days later, on Wednesday 8th July. The highlights of the leg to Jan Mayen were two encounters with pods of killer whales, and a close shave with a Russian factory trawler, the Armanek Begayev, of Kaliningrad, which we met just inside the Arctic Circle. We had crossed the Arctic Circle, 66 33N, at about 0800H on Saturday 4th July, 8 days after leaving Whitehills.
Spent two days close inshore at Jan Mayen, the first sailing up the east coast, the second becalmed off the North east end of the island. The scenery was magnificent, the only disappointment being that Mt Beerenberg, the 7000’ volcano that dominates the north end of the island, was permanently shrouded in cloud.
From the North Cape of Jan Mayen I sailed on due north, partly out of necessity (we had a brief north westerly wind) and partly from choice as I wanted to reach 72N before turning west towards the Greenland coast. This we did at 1840H on Friday 10th July. Then headed west towards the East Greenland coast, in search of ice, meeting our first floes on the late afternoon of Sunday 12th July. Spent about 24 hours in sea ice of low density, but towards 2300H on the evening of Monday 13th July, about 80 miles east of Scoresby Sound, began to encounter small bergs and bergy bits in dangerous concentrations. After a small bergy bit had wedged itself under the starboard quarter for a few seconds I decided that we had seen enough of what we had come to see, and started to retreat rapidly east. This was none too soon, as a few minutes later I could see a line of unbroken pack ice to the south, directly to leeward. Having got clear of the ice I sailed south east to get out of the East Greenland Current and away from any stray bergs or floes.
At this point I was undecided whether to go south via the east coast of Iceland, or to carry on with the third objective of the voyage – a passage through the Denmark Strait between Iceland and Greenland. Finally decided to go for the latter, so shaped a course south west to take us to the north west headland of Iceland, Stromnes. We reached here on Monday 20th July. In deteriorating weather we closed the coast and I eventually decided, somewhat against my better judgement, to enter Adalvik, Iceland’s most north-westerly bay, immediately to the south of Stromnes. Got into the bay, but despite a F6 north-easterly blowing outside, were totally becalmed for almost 4 hours, at the mercy of a mix of tides and currents evidently at work thereabouts. By this time I had given up all thoughts of sailing to the head of the bay to anchor. As soon as some wind finally came in we scooted offshore again as fast as possible. Had a good run down the west coast of Iceland in a cold north-easterly, the seascape dominated for two days by the Snaefellsjokull, the glacier at the end of the peninsula in central west Iceland.
We skirted round the end of the Reykyanes Ridge that extends 40 miles off the south west tip of Iceland, with its shoals and skerries. At that point I had a ‘nearly home’ moment, although there was still nearly 800 miles to go. Any hopes of a fast passage back to Scotland were soon dashed as we met constant calms and light headwinds, interspersed with the worst storm I have encountered in Mingming. We lay to Mingming’s series drogue for 12 hours and, after that parted through chafe caused by a silly mistake on my part when setting it, another 5 hours under my home-made B & Q sand-bag sea anchor. Off south west Faeroes we were badly held up again with a F7 from south east that blew for a good four days. Finally arrived back at Whitehills at 0930 on the morning of Thursday 13th July, the last 800 miles having taken 20 days.
Our noon to noon daily runs totaled about 2700 miles, although we of course sailed a lot further. By far the most interesting and challenging voyage I have made, with 16 days spent inside the Arctic Circle. For once we achieved all our objectives. Mingming was ,as ever, amazing, and the insulation I had put in over the winter made her incredibly comfortable, even in water at nearly zero degrees."

There's a lot more at Roger and Mingming's website the Simple Sailor.
Posted by Thomas Armstrong at 1:38 PM

Thomas,
I thought a nine minute video of floating ice would be boring. Poetic is more like it! Thank you for introducing me to Roger!

ah, here is the famous MingMing!