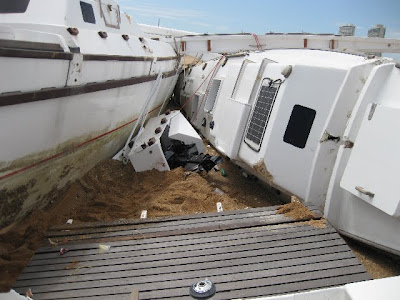 This from Warren Matthews, a New Zealander building a sister ship to Creed's Tiki, also with the same builder. Warren withdrew his boat in January, 09. Link to his website for more and context.

Would my boat have met the same fate as Creed O'Hanlon's??

It would seem so. Whether it would be for the same reasons I can not be certain as I did not have an opportunity to examine where the failure occurred on Creed's boat and the builder did not send me the photos that he promised in a separate email to the one I published.
Let me explain why I think that my boat would have met a similar fate.
In an earlier posting entitled 'The bad' I explained how some of the beam troughs were out of square. Well things have got even worse...much worse.
I now find that the beam troughs are lacking totally in any of the supporting structure and apart from one piece of wood on the aft most beam trough which sits on top of the Nida core deck there is NO reinforcing timber at all...period. So there is nothing to tie the beams into the hulls to ensure structural integrity.
To say I was flabbergasted is an understatement. I wouldn't had thought that such an important thing would have been ignored but a little voice inside of me said 'check it out'.
I wrote to the builder yesterday expecting a reply today but none came so I thought that I may as well publish the email to him which explains my concerns. This is copied below.
I will now engage a marine surveyor to check out the rest of the hulls and take core samples to ensure that it is seaworthy.
Although this puts back my program by a couple of weeks it was better to find out now because if we had not picked it up I doubt that it would even have survived the sea trials. Also, there is no way I would have got a Cat 1 certificate which is required by all New Zealand boats leaving the country under their own propulsion. This survey is very tough because the NZ government got tired of foreign yachts visiting NZ after having sailed around the world in the tropics and then having to be rescued in NZ offshore waters because the vessels were not properly equipped for the rough conditions that are common around here.

The builder responds to my letter...but I still have TOTAL faith in the Wharram designs!

As expected, by publishing the letter on the blog it solicited an immediate response from Raoul. Whether he would have responded eventually to my email I don’t know but that is irrelevant now.
The outcome was as expected...no cooperation but a threat. Nonetheless I thought that it was fair to ask him the relevant questions particularly about the modification of the beams. As he is not prepared to cooperate on helping with this but instead chooses to threaten me I guess that we will just have to assess the beams ourselves and decide whether to build new ones.
As I said in the heading, I have total confidence in the Wharram designs and I would rather go to sea in a well built Wharram than a modern cat of the same size PROVIDED the key structural areas are built as per the spec’s.
I have posted Raouls replies, unedited, and my response which will be the end of this matter as I am obviously wasting my time seeking any support from the builder. I will now just get on and fix it and post the progress on this blog.

Dear Warren ,
As I said once , Wharram cats are not designed and don’t comply to any international recognized standard , such as ISO or similar .
It is then impossible to properly perform a Survey of these vessels , as there are no reference points .
As I said once , the construction with beams , ropes and locating pins , is not foreseen by any internationally recognized Notified Body or standard .
No Class is applicable either .
These boats are floating and sailing around the world , based on empirical experience .
We tried to build as good as we could , without data , and based on experience .
A normal RB boat can be surveyed and surely will pass , as the structure is built accordingly to the ISO 12215 for small boats or other rules .
You decided to remove the Tiki 38 before the completion and to make void the boatbuilding agreement . Your choice , and about the losses that you had to suffer , unfortunately are a consequence of that choice .
I don’t believe the Tiki 38 is a right choice for you ; I don’t think can carry the weight you are planning to load aboard ; I don’t trust hinges in rope as they are absurd in the modern world where the bronze and stainless are commonly available , I don’t think a sailing plan without booms will be efficient on a cat , I don’t think the Tiki 38 rig made in aluminium pipes makes any sense in the modern world where aluminium masts are commonly available .
My suggestion is to complete the boat ( if your new Builder can hold the pressure ) and perform some tests , then modify , adding reinforces here and there , in order to have a working boat ; time will say if your boat is reliable ;
Step to step , sail around the gulf and don’t expect to cross an ocean on that boat the first day . Slowly slowly build up some experience and listen to somebody ( this is the hardest part ) more experienced and as I said , after few attempts eventually will work .
If you don’t like , find a more reliable design and build another vessel .

I think mr Allan answered to you already .
Your boat and the first Tiki 38 are built , in my opinion , properly , considering that these boats cannot be certified , as the design is not following any recognized rule , as far as I know .
You picked up the boat from RB yard , in condition of " where is as it is "
And you agreed and requested the delivery . You signed an agreement indicating that you would not have done any bad promotion , and you are doing or trying to do this right now , trying to black mail me in change of money .
If I read one more word in your blog containing defamations and an attempt of extortion , I will report to the Police and your next trip to Thailand will be an unforgettable one .


My emailed response to Raoul.

Raoul,
I have not heard from Allan
The reason I contacted you was to bring to your attention serious deficiencies due to not building critical components of my boat as per spec. These deficiencies would have made it unseaworthy. I asked you two very simple questions.
One was for the details of the changes you made to the beams from the specifications and two if you are prepared to meet the cost of rectifying the deficiencies.
Instead of providing the information which I requested and answering if you are prepared to meet the cost of bringing that part of the boat back to spec you respond with a serious threat. A request like this is hardly extortion. I did not make any threat to you or attempt to extort you. All I wanted was a yes or no. If you had answered yes, then well and good. If your answer was no, then it would be up to me if I wanted to consider legal action.
That is the way normal business people go about their business.
Never mind, you have said no, so that’s fine.
I do not appreciate your threat. You are welcome to do what you want to do. I feel quite comfortable as I have some significant influence in Bangkok at the highest levels.
I have done nothing but publish truthful things. I am well aware of Thai law and I have not breached it.
Just for the record Raoul, in New Zealand we don’t have a nice little calm gulf like you do. And, when it comes to open ocean time I have more than my share of experience having been a commercial fishing boat operator off the coast of New Zealand for many years. Also in other parts of the world.
Anyway, you have made it clear that you are not prepared to cooperate in this matter so I do not intend wasting my time communicating with you any further. I will get on with the completion of ‘Natural High’, I will sail it to Tahiti and enjoy many days exploring the islands.
I am not going to address your comments about certifications etc, etc. I think that Wharram cats have well proven their sea-worthiness over some decades. If you feel otherwise maybe you could do an article about this on your blog and compare the Wharrams with any successful ocean crossings that may have been completed by your RB35. (Real ocean crossings at higher latitudes)
If you read my other blog on health you will know that I never wish anyone ill will even if I feel they have wronged me. The same applies to you Raoul. I hope that the time will come for the benefit of both you and others that you will contemplate the way that you treat others and perhaps make some life changes.

I think Mr. Wharram should be made aware of this "boat builder's" view of the Wharrams he is (has been) building.

He may wish to modify his designs for Thai waters. Either that or modify his recommended builders list if this bozo is on it.

I think Creed's boat simply dragged her anchor in the strong SW monsoon and ended up on the beach where she probably pounded for some time before the ropes holding the beams in place broke.

My Wharram was in a similar position right next to Creed's on the hook for many months and she dragged from time to time even with very heavy ground tackle. I had crew on board whenever the wind picked up so no problem on my boat.

There is an officiallly approved Wharram professional builder in Thailand and he can build a Wharram to European 'EC' approved standard.

The Tiki 38 was really designed as a home build and many thousands of Wharram boats are built and sailing in comfort and safety all over the world.

Creed's boat was certainly beautifully finished but was not built according the the Wharram plans and I suspect that was at Creed's request.- why he would go for edge glued strip planking in Western red Ceder rather than ply is a bit of a mystery to me but I guess it was a weight issue. Not very Wharram.

Approved professional Wharram builders can be found on www.wharram.com

I am living in thailand and have been in contact with some "professionnal" boat builder. What amazed me is that one proposed me to use plywood, fiber and polyester for the building of a 50 feet cat. Hope your cat wasnot build in the same way as it seems to be his usual way of building.