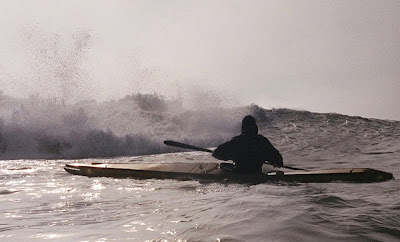 Heading into surf in a baidarka 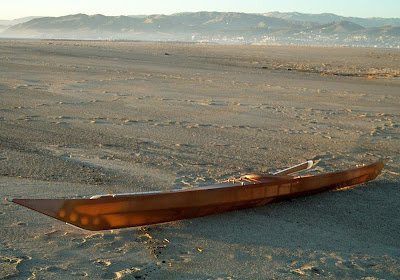 One of John's Greenland style Qajaq. 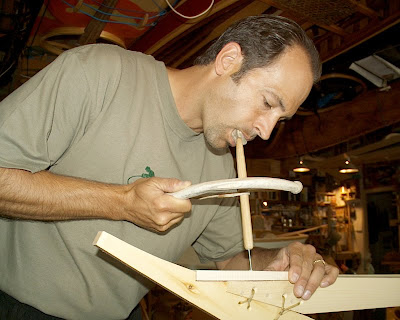 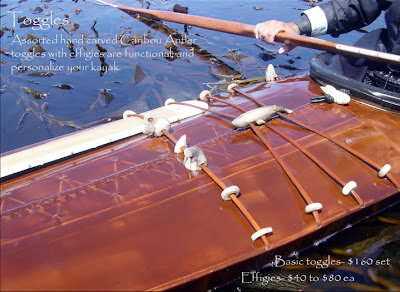 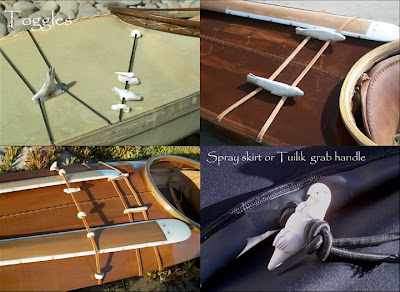 Effigy toggles, paddles and one of John's leather backrests. 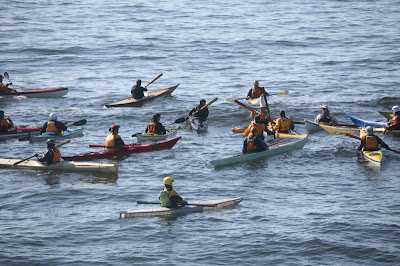 Here's a group of paddlers at one of the T.A.K.S. events, a kayak rolling workshop. 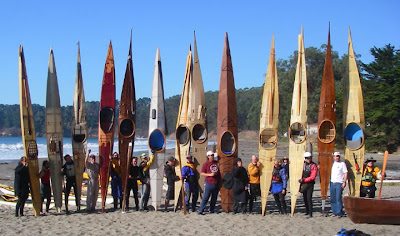 A lineup of participants for the first T.A.K.S.


all photos courtesy John Petersen
I have to say right up front that I find the use of the term Shaman, for a commercial enterprise, especially by someone who isn't a shaman, a bit objectionable. I have studied shamanism for most of my adult life and have the highest respect for this form of spiritual endeavor and healing methodology. Marija Gimbutas, among others, has named shamanism as the first religion, and common to all early emerging cultures. That said, it is obvious that John Petersen has a very high regard for the cultures he is drawing from and his skin on frame kayaks and especially his kayak accoutremont are beautifully wrought and approached as an art form. His toggles are particularly compelling. Following he lead of his traditional exemplars, John crafts finely carved effigies which are put to practical use. John's work is highly regarded by the traditional kayak community. He has also been successful in originating and organizing a gathering of like minded traditional kayak enthusiasts for an annual event in California dubbed the Traditional Arctic Kayak Symposium or T.A.K.S. In it's fourth year, the symposium has proven to be an important and exuberant expression of the growing interest in and celebration of traditional kayak research, building, skills preservation and acquisition, and appreciation. Not to mention just good plain fun.
John Petersen seems to be attuned to the reality expressed by both traditional and contemporary builders of these craft- that they take on a life of their own, they become living beings. Visit his website.
Posted by Thomas Armstrong at 10:27 PM

I also have a great respect for the Shaman (aka wizard/priest) persona of indigenous cultures, and it would be interesting to know if John has been entheogenically "initiated" into his calling.

Something about these skin boat enthusiasts that transcends mere hobby and soon passes the border into religious experience. Boats are interesting vehicles... ;-)

dude, lighten up about the shaman thing. the guy doesn't need to be a shaman to incorporate a sense of transcendent spirituality into the art of boat building. you missed the point entirely!