the Ohio, or, "What I did over Christmas Break" 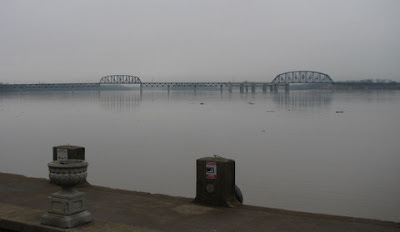 I grew up playing on the Ohio. My dad bought a mahogany runabout which we reconditioned to make her usable. Had a 40hp. Merc. Used her for day trips, water skiing and overnight camping on 18 Mile Island just off Westport Kentucky. Seem to remember also a lot of drinking by the adults. Later, brother John and I would take a canoe to the Island to camp overnight and recapture the past. My brother Rand still plays on the Ohio with his two kayaks. This shot is from the Belle of Louisville dock area and shows the river at it's widest, about a mile across. I recall we were always on the lookout for tugs and barges. 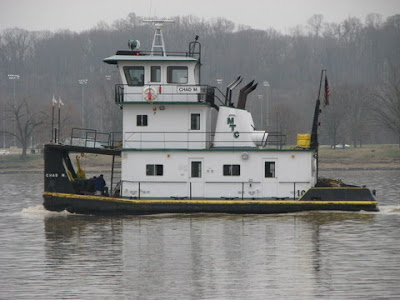 I wanted to revisit this experience, so day after Christmas, having made the annual pilgrimage to visit with family and friends and celebrate the holiday with Mom, brothers and sister Jennie and her family, we struck out for the Indiana side of the river to catch some traffic and take a look at Jeffboat Inc., the largest inland shipyard in the country.  Spotted the Chad M from Jeffersonville, Indiana and grabbed a few photos from a small waterside park. 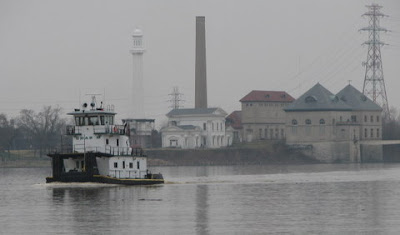 This is the Chad M heading upriver past the historic waterworks in Louisville, which now is home to an art gallery. 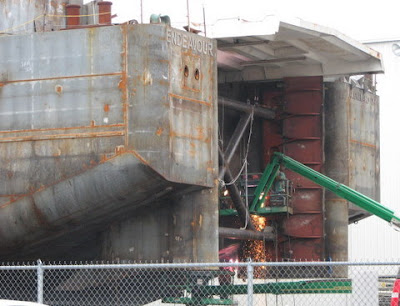 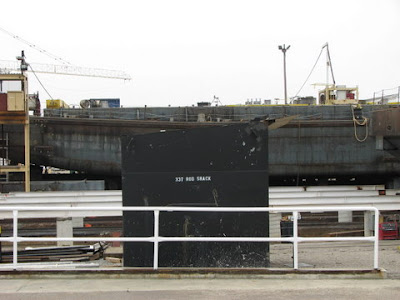 Security at Jeffboat said they were closed for the Holidays in response to my request to look around. Homeland Security and all. But of course they were still doing some work, as you can see from these works in progress. 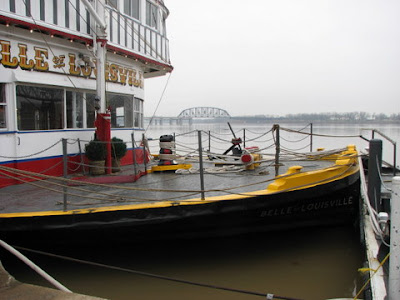 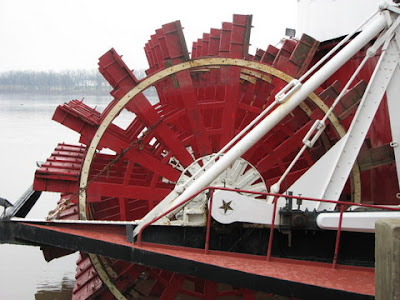 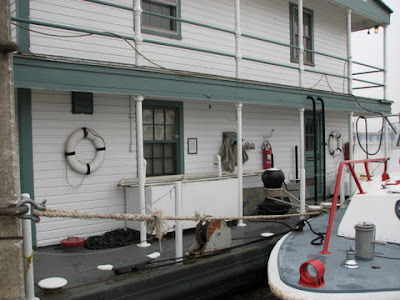 Back on the Kentucky side of the river John drove us (unbidden) to the dockside where the Belle of Louisville is tied up. I had cruised on the Belle for my 8th Grade field trip and hadn't seen her since. I was most intrigued by the office/gift shop on a barge moored next to the Belle. 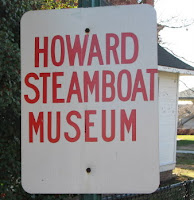 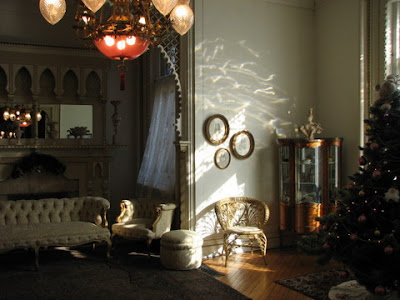 While 'spying' on Jeffboat we discovered the Howard Steamboat Museum, which was closed on the 26th, but we resolved to return the next day. Thinking it would be a quick 30 minute visit to a small museum, I was surprised by the depth and richness of the collection. We spent nearly three hours there, much to the detriment of Mom, who is 82 and not really up to the long visit.
Happily she was able to take a seat and watch an extensive video tour of the museum.  The museum is housed in a delightful Romanesque Revival mansion built by Edmonds Howard, son of James Howard, the founder of Howard Shipyard. They built over 3000 steamboats and other working craft over a long history, beginning in 1834 and culminating in 1941. With a reputation for building the highest quality steamboats available, Howard's work was in high demand. Their legacy includes the luxurious J.M. White (1878) and the City of Louisville(1894), which to this day holds the speed record for the Ohio river. 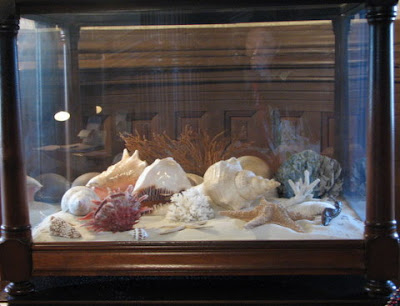 Mrs. Howard commissioned this aquarium which leaked and was not able to be fixed, so ended up as a vitrine for a shell collection.

A primary feature of the Howard museum is their collection of models. Here we see a model of the Tom Green, and perched atop her case is a half hull of (?). 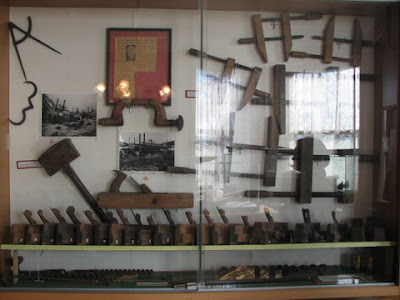 Here we have tools and historical materials documenting the Howard Shipyard's building of three packet boats and a towboat in Unalaska for the Alaska Commercial Company  (formerly the Russian-American Company) in 1897, to service the Klondike gold rush. Howard's didn't really need the work so placed a ludicrously high bid, which was nonetheless accepted, and dispatched a crew to Unalaska to carry out the project. 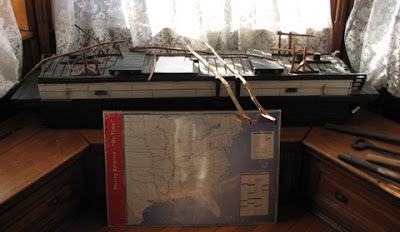 This model of an early 'Flatboat' was built by one of the Howard family. Though they couldn't travel upriver, these flat bottomed displacement"tubs" were the vessel of choice for many early 'river rats'. 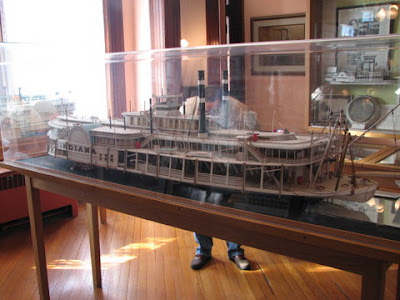 Here's something from the other end of the scale. A large model of the Howard built Indiana, made with great skill and enormous attention to detail. The museum keeps a basket full of flashlights to allow visitors to examine the interior of this amazing model. My brother Rand can be seen on the other side of the model, peering in. 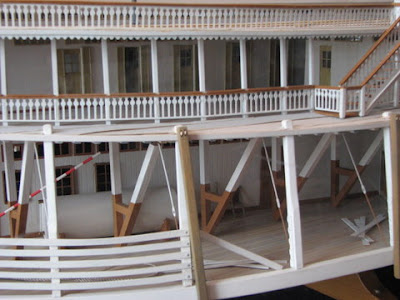 Detail of the Indiana. 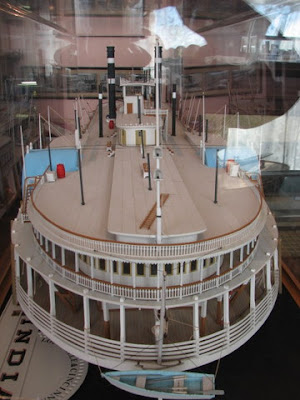 Stern view of the model of the Indiana. This model was built over several years by a dedicated model builder on speculation and offered to the museum on completion. They bit. Can you blame them? 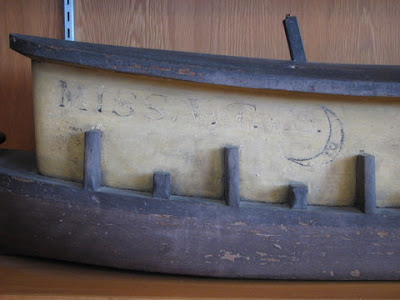 Here's one of my personal favorites, also built by a Howard family member. It's not clear to me what kind of boat she represents but is so charming in her primitive attributes, who cares. Looks like she's named the Miss V.T., Moon Co. 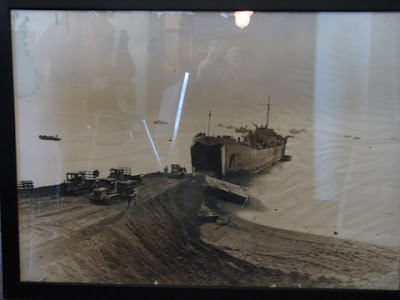 In 1941 the Howard's run culminated in the company's sale to the U.S.Navy. The Navy used the yard to literally churn out LST's, sub chasers and other wartime craft. They built well over 100 LST's, (I think it was 128) turning them around in about 60 days from start to finish, and broke the water with a new one every three days. 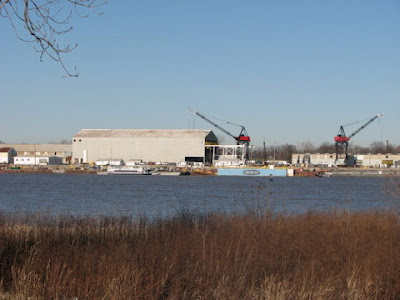 After the Navy involvement the company became Jeffboat Inc., which continues the Howard legacy as the oldest continually operated inland shipyard in the country. And the largest inland shipyard. On a future visit I plan an excursion to visit and write about the current day Jeffboat. But I may not be allowed to. An impromptu visit to Wooten River Service and Supply, which provides all kinds of service to passing barges, including repair, fueling, groceries and mail delivery, was denied on the grounds of 'Homeland Security' 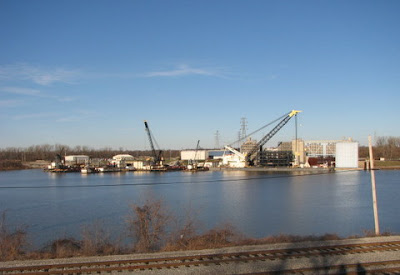 Just downriver from downtown Louisville are the McAlpine Locks, built to allow river traffic to circumvent the Falls of the Ohio. As a measure of the vitality of current day rivers traffic, the locks are being renovated and expanded. The picture above shows the work station/marina involved in the reconstruction of the locks, located on an island in the Ohio. The large rectangle visible to the right in the photograph is one of the lock doors or gates. 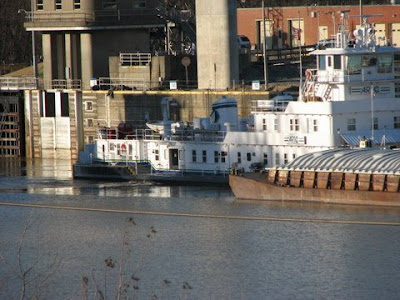 Here is a tug pushing a very large barge through the locks. These barges carry enormous loads and are a very efficient way of moving resources.

This is a composite photo, and while it's a little small to really read, it will give you an idea of the length of this double barge.
all photos copyright thomas armstrong/elisabeth lourie
all rights reserved
Posted by Thomas Armstrong at 6:13 PM

Interesting photos! Riverboats are something I know very little about.

also a very nice post. i wrote about louisville and jeff'ville last june