Kayak part 1.3 the Historians: Howard I. Chapelle and Bark Canoes and Skin Boats of North America 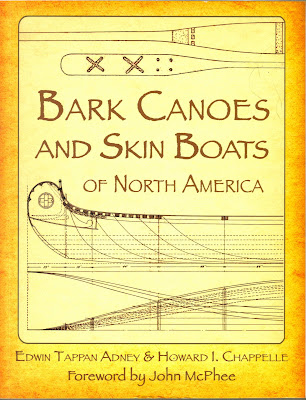 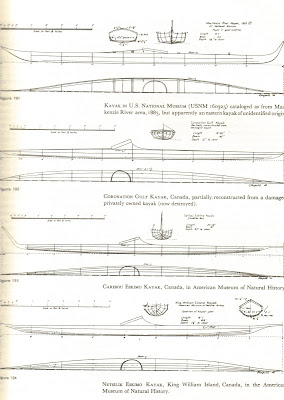 all images courtesy Skyhorse Publications
Bark Canoes and Skin Boats of North America was a seminal book. First published in 1964, fourteen years after Edwin Adney's death in 1950, the book was to greatly influence a generation of kayak builders , historians and designers. Adneys papers and a large number of bark canoe models were left to the Mariners Museum in Newport News Va. Frederick Hill, Director of the Museum placed the material in the hands of Howard Chapelle, then Curator of Transportation at the Smithsonian. Best known today for many works dealing with nautical subjects, including Boatbuilding and American Small Sailing Craft, Chapelle acknowledged having a keen interest in bark canoes and eagerly undertook the task of assembling the chaotic collection of Adney's research into a cohesive publication. He took the liberty of including a chapter on skin boats, primarily the result of research he began in 1946 at the request of Vilhljalmur Stefansson for the Encyclopedia Artica, a project which failed to materialize. The material was eventually returned to Chapelle, revised and altered after receiving criticism and suggestions from, among others, Henry B. Collins of the Smithsonian's Bureau 0f American Ethnology and John Heath, who also contributed an explantion of Greenland kayak rolling with photographs which is included in the text as an appendix. This unassuming scholarly text was to prove to be a bombshell. Still in print it has gained a wide audience and has been a major factor in the current blossom of interest in skin of frame kayaks. Several of the contemporary skin on frame kayak builders I've contacted acknowledge it as the 'Bible' or their primary inspiration. Chapelle's project was to "measure the skin boats and to make scale drawings that would permit the construction of a replica exact in details of appearance, form construction, and also in working behavior." Chapelle endeavoured to include as many identifiable types of kayaks as possible and there are kayaks drawn from Siberia to Greenland. With a total of about twenty five separate types drawn, the chapter has had tremendous impact, possibly more than the book as a whole. Most contemporary kayaks, whether derived from Greenland style boats, Aleutian models or central Canadian prototypes can trace there evolution from this book. Likely those paddling their shiny new Kevlar whatsit have no idea where it came from. It came from Aleuts or Inuit and probably through Howard Chapelle.
Posted by Thomas Armstrong at 10:23 PM