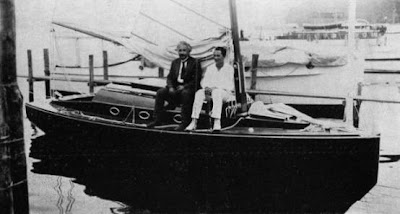 Albert Einstein was given this boat for his 50th, in 1929, by a wealthy admirer. It looks really interesting. The yacht measures about 23' by almost 8' and is shoal draft. It was designed by Adolf Harms of "Berliner Handelsgesellschaft". Named Tummler. This website was relayed to me by an associate/reader (who wishes to remain anonymous), because he thought (you) my readers might enjoy it. I certainly do. The boat seems a bit unconventional for the time, plumb bow and stern, centerboard and shallow draft and fairly wide, but apparently delighted Mr. Einstein. He called it his "Thick Boat". Read all about it here. Thanks to Jimmy G.
Posted by Thomas Armstrong at 8:31 PM

fascinating post. do you if einstein ever got a boat--thick or otherwise--in the US?

Will, I have no idea about other boats Albert owned. Why? Do you know something I don't?

An intriguing vessel on many levels, not least for the specially built (and mentioned) pipe rack! Seems to have been well ahead of her time.