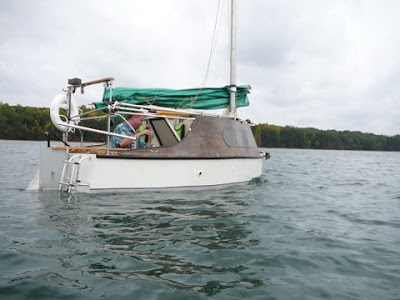 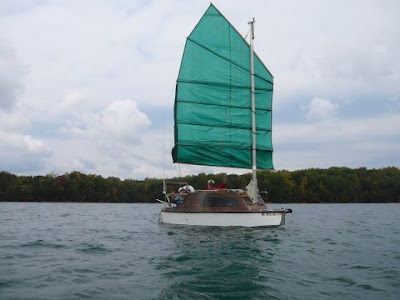 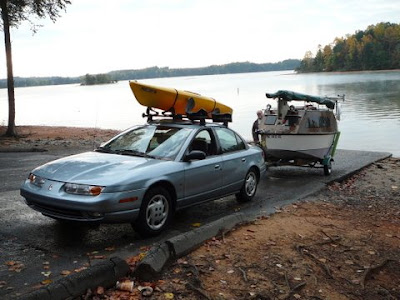 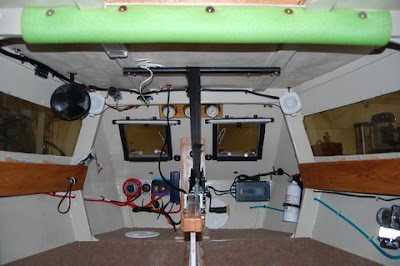 Bill Longyard is the author of what appears to be an execellent book (though I've yet to read it) on epic voyages made in "improbable vessels".  The book's titled "A Speck on the Sea" and reaches back five centuries to tell these stories.
Dissatisfied with the available production boats for what he terms mini cruising, Bill decided to design and build his own, to "show what could be done with 14 feet". And show he did, and then some. His little Lucky Town 7  has sitting headroom for two and enough enough space for a six footer to stretch out comfortably. There is a flush toilet and holding tank and provision for a shower, though the shower's not yet implemented.
The Junk rig is made from polytarp and cost about $100. and can be reefed from the cabin. Bill finds the Jung rig far more friendly than any other rig he's used, including gaff and gunter. She ha a 246 pound drop keel and an aluminum kick up rudder.
There's a 4hp diesel in the aft compartment which is used to charge two marine batteries which in turn power a 55 lb. thrust trolling motor, judiciously used. He also carries an air compressor, radio bank and a solar panel. Quite a lot in a 14' loa 6' beam cruiser.
The boat is trailed with a small car and launches quickly as the mast has a spring loaded tabernacle and can be raised or lowered on the water, instantly.
William is planning to make plans available at a nominal charge soon. Should be interesting to say the least.
Posted by Thomas Armstrong at 10:40 PM

"A Speck on the Sea" is an excellent book. Highly recommend it.

Downloaded it to my Kindle. Thanks for the tip!