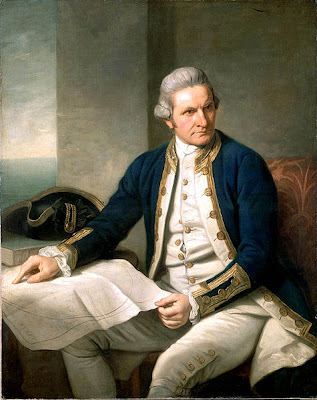 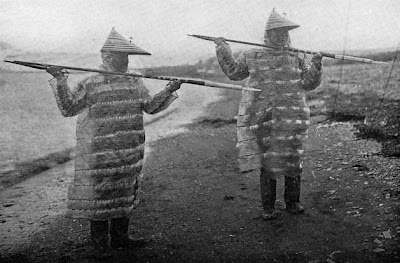 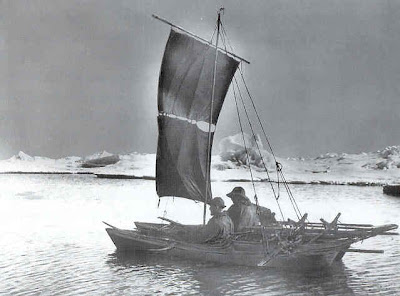 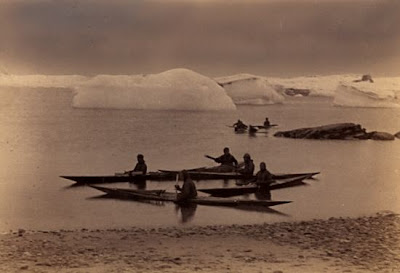 Five members of Nansen's Expedition across
Greenland 1888 to1889, Nansen is closest to shore. Photo courtesy The National Library of Norway 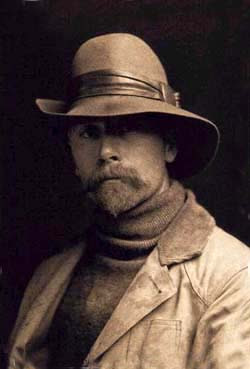 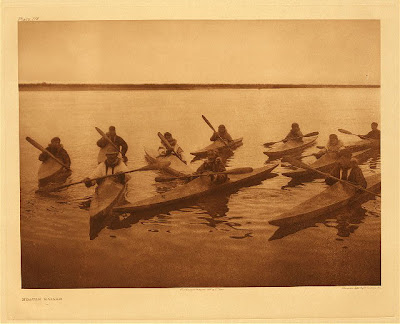 This post will initiate a new series on Quajaj, or Kayak. It is a vast subject and I plan to deal with it in several parts. First I would like to write about the explorers and ethnographers who contributed to our earliest understanding of this boat type and then to contemporary historian/builders who all seem to back their research with empirical investigations into building replicas and/ or innovative craft based on historical models. It's my intention to focus mainly, but not exclusively, on skin on frame boats.

This, as I said, is a large subject and not meant to be exhaustive, but rather an outline to engender personal research. I will leave out many important figures. If you know of such an omission, use the comment box, please. There is a very rich annotated bibliography of Arctic Kayak by David Zimmerly here.

One of the earliest chroniclers of the kayak was none other than Captain James Cook.   'A Voyage to the , published in 1785,  contains several references to kayak. Nearly a century later, Norwegian Arctic  explorer and academic Fridtjof Nansen documented Inuit life extensively, built his own kayak of bamboo based on research in , and was responsible for some of our earliest photographic records of both Inuit life in general and kayak specifically. Another key figure was photographer/artistEdward S. Curtis who was offered $75000 in 1906 by J.P. Morgan to produce a series  on the North American Indian.He did so, with over 40,000 photos and over 10,000 wax cylinder recordings of Native American music and language. Volume 20 of the series has extensive material on kayak, especially from .

Posted by Thomas Armstrong at 2:27 AM

a vast subject indeed. i had a few kayak pics on my blog. you inspire me to "digitize" some my old ones to put up too. looking forward to this series.