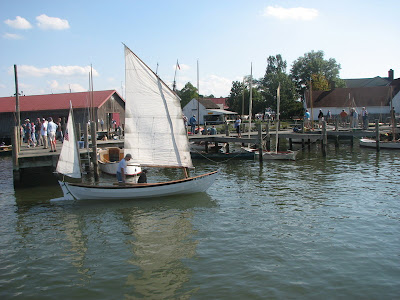 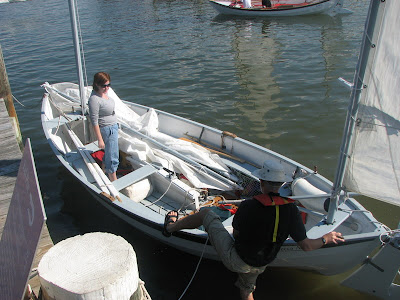 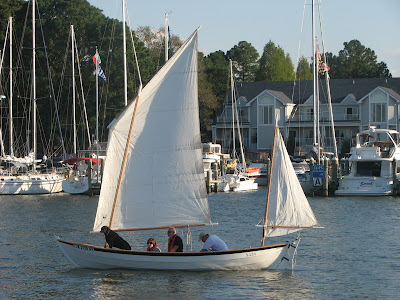 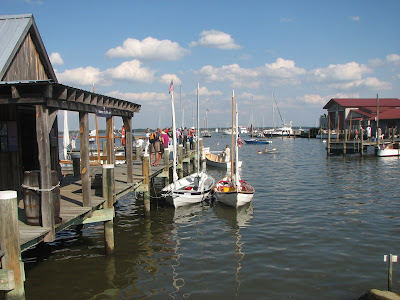 One of the first things to greet me after entering the Museum grounds was the sight of two Iain Oughtred lovelies returning from the sail race, which apparently wasn't much of one because of low winds. Top and third photo is "Sara", a Ness Yawl owned by Jay Eberley and canine companion, built by Geoff Kerr of Two Daughter's Boatworks in Westford Vt. The other, a Caledonia Yawl, is Dale Davenport's "Rebecca Ann". Geoff built her hull and Dale finished her himself. Old friends, the two rafted up together, seemingly oblivious to my drooling. 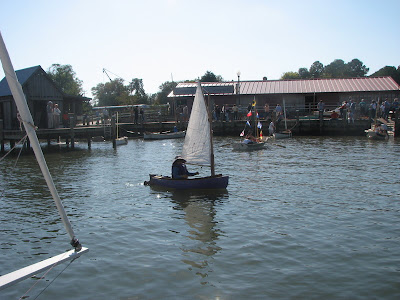 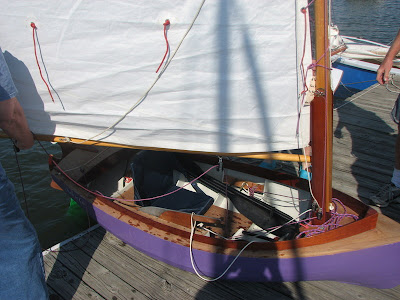 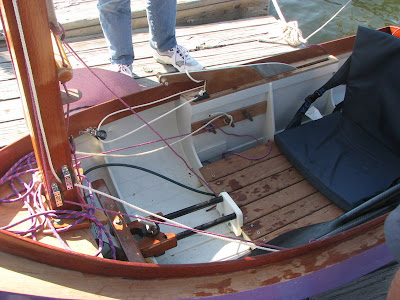 One of the highlights of the day was meeting this stunning little gem and her owner/builder Karen Soo. Karen went to Phil Bolger with her design criteria which included the stipulations that the boat fit into her car and be light enough for her to pick up and carry. She got her wish, and the design has gone on to become a Bolger success, called Queen Mab. Karen took her time,building over some eight years, able to only commit to a few hours a week. The results were worth the wait, as Karen seems delighted with her diminutive craft, the "Maltese Cat". So was the small crowd that gathered round to help bring the boat onto the dock. 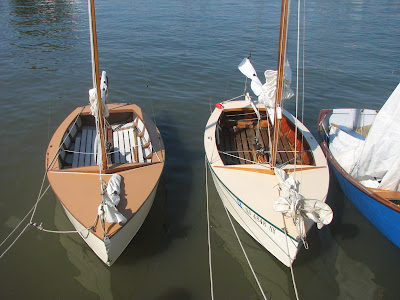 Here's a fine pair of wooden Blue Jay's. This 13'6" one-design class was fathered by Drake Sparkman of Sparkman and Stephens as a sort of baby Lightning. The boat has become an all round junior training vessel and numbers over 7200, and wooden versions are still being built today. 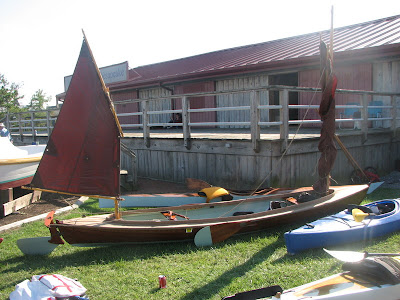 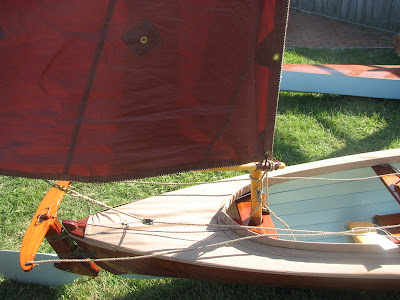 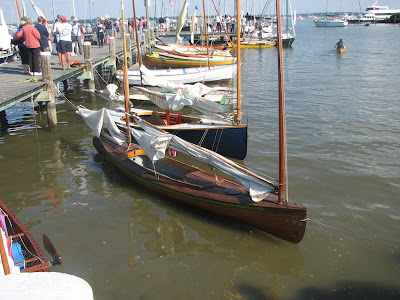 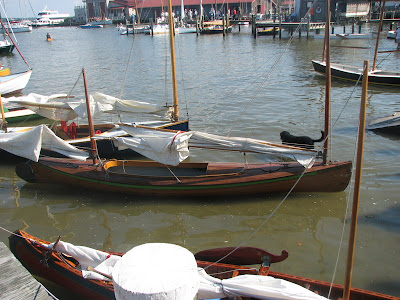 Lots of gorgeous canoes and kayaks. I responded to these two canoe yawls. The tanbark sails belong to an Iain Oughtred design built by owner Andrew Slavinskas. The other is Pretty Jane and I know nothing more about her except that she is. 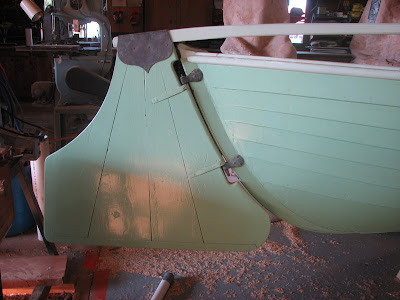 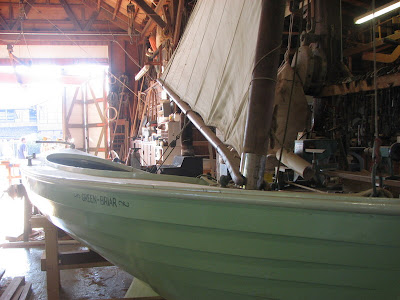 Fine craftsmanship is evident throughout this gathering, and nowhere more so than with this carefully restored Delaware ducker "Green Briar" in the museums Apprentice workshop. You can have her for $12,500. 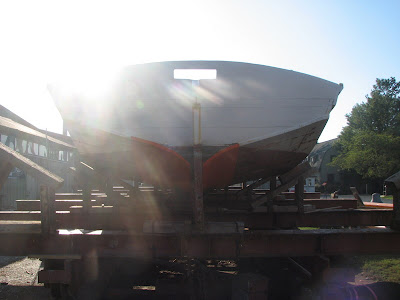 Ahh, yeah, like I said, just a fine day. 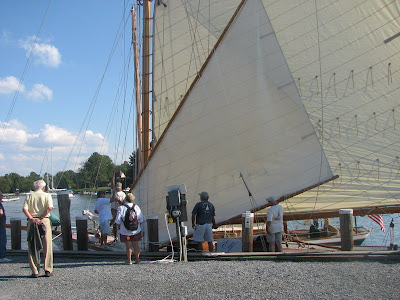 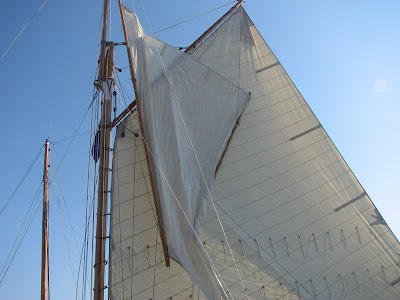 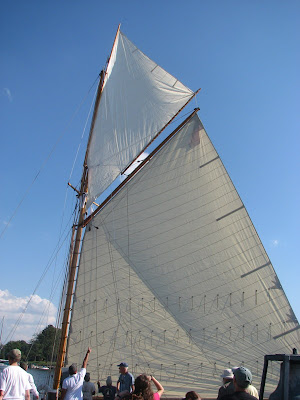 While she's not exactly a 'small craft', "ELF" and Rick Carrion made their way to the festival. Rick was there to address the Annual Meeting of the Traditional Small Craft Association that evening, no doubt speaking about the subject on which he is most eloquent, the restoration of ELF. Earlier in the day Rick found time to get in some practice setting the massive topsail, with a little help from his friends. Well, a lot of help from his friends. And they got it right, but not without some trials and tribulations. With the sails furled and lashed down, Rick confessed his relief at running his 'fire drill' whilst tied to the dock as opposed to on the water as he'd originally planned.
q
All in all a great day, well worth the drive. Maybe I'll see you there next year.
Posted by Thomas Armstrong at 3:20 PM

Nice!
I've sailed on the Ness Yawl and Caledonia Yawl... these are fine boat indeed. The ones I sailed on were built by Mr. Charles Watson, in Rio de Janeiro, to a phantastic standard.
Peter

Nice post. You should check mine on the same event: http://www.chineblog.com/plugin/tag/mid-atlantic+small+craft+festival. Its hilarious - we must have been standing next to each other on several occasions. Pity we didn't connect.

Not as oblivious as you thought, Thomas. You told me the url for your blog, and I recalled it today and took a look. Very nice.