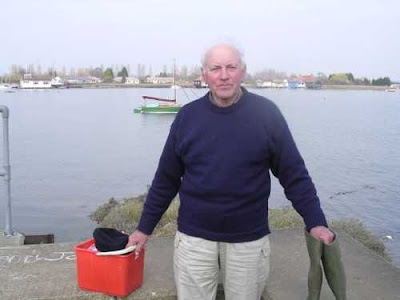 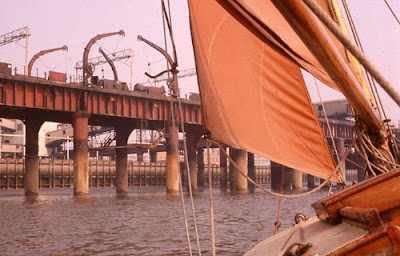 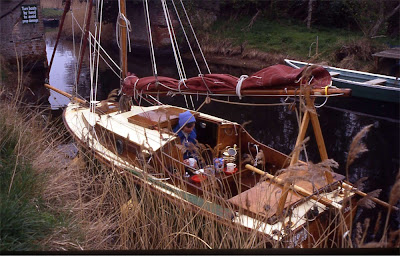 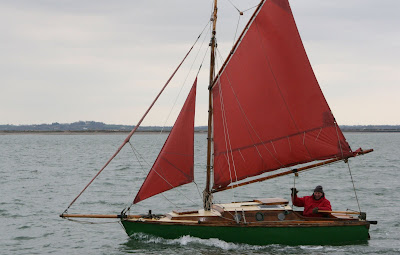 This photo courtesy of  Willliam Stock, no relation. A chance encounter. Visit his blog here.
Charles Stock is an icon of microcruising, in a very different way than say, the Dyes. He and his 16'6" gaff cutter Shoal Waters have cruised over 70,000 miles, probably more like 80,000 by now,  primarily in his home waters, the Norfolk Broads. Estuary, rivers, creeks, and urban environs all explored and enjoyed in this little boat he rebuilt,to his own design, from the hull up in 1963. As Charles himself puts it " Over 70,000 nautical miles have been made good from Maldon between Whitby, Ostend and the Solent". But Charles has been cruising the Broads for even longer, first in another boat he bought shortly after the war. He has been content with shorter cruises, weekends and holidays, with 70 to 80 miles 'made good'. Proving that one needen't look further than their own backyard for adventure. He has in common with the Dyes a minimalist approach to cruising, keep it simple. Small boat, practical rig, no mechanical propulsion. Britain, after all, is an island, and it's middle class has been no less immune to the lure of yachting than it's elite. Postwar Britain saw a surge in the pursuit of small boat cruising, encouraged by the writings of Maurice Griffiths and Francis B. Cooke, to name two who influenced Charles.  He's an excellent writer and has published some 60 odd articles in various magazines in addition to his three books. His website is voluminous and one could spend days consuming all thats there. One has. A sample:
"The sheer joy of a little ship wooing the winds to travel over the waves is reward enough in itself, but the small boat sailor on the restless waters of the Thames Estuary gets an almost unlimited bonus from the backcloth against which he sails.  Not for him the endless lonely days of sea and sky of the ocean traveller.  Hour by hour and enthralling panorama of fauna, flora, trade ancient and modern, relics of wars fought yesterday and a thousand years ago, maritime architecture from St Peter's on the Wall circa 675 AD, to the modern power station at the Isle of Grain and the most enduring of all, sea defenses from ancient grass banks long since breached, to today's massive Woolwich Barrier, unfolds before him."
Photos courtesy Charles and Chris Stock with the one exception noted above.
Posted by Thomas Armstrong at 12:20 AM

u can learn more about small boat cruising from Stock's book than from nearly any other – he is Francis Cooke's logical successor and just as minimal (surprising given the 100 year difference between their eras!). Cooke and Griffith would also be worthy of some more words from you too – too bad not more sailors read their work today.

I just wanted to say how much I have enjoyed reading your blog. It has brought back many happy memories for me.
My first cruising boat was a plywood Silhouette, seventeen foot six inches lol, until I added a bowsprit then she became twenty foot lol. I never though of her as being a micro cruiser though.
The photos of the egrets reminded me of the time I took her over the Brittany. I awoke one morning in a secluded little anchorage, looked out just in time to see a little egret a couple of yards away catch an eel. I watched spell bound for nearly half an hour as the egret tried to swallow the eel. Eventually it gave up as the eel was far too big and feisty for it.
My present boat is a Hilliard six tonner. I began to rebuild her from a virtual wreck many years ago. She is afloat now but there is still a lot of work to do, does it ever end?
Thanks for the link to the Shoal Waters web site. I have read Charles Stock’s Sailing Just For Fun but didn’t realise he had a blog. I’m probably going to spend some time trawling through that.
Best wishes with your own project,
Mike