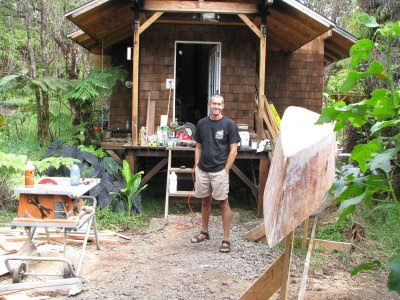 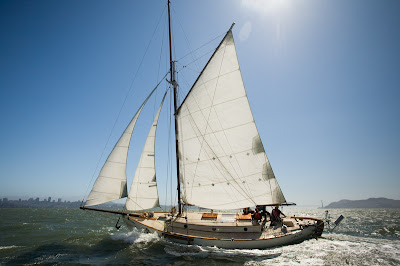 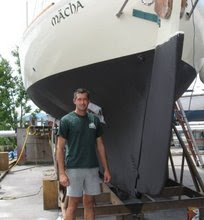 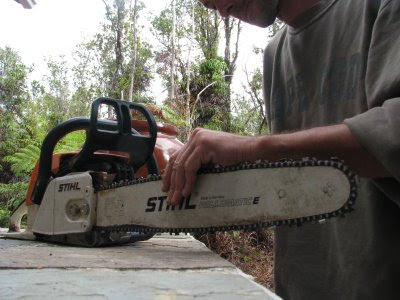 Jay (Jerome) Fitzgerald is the author of several books about sailing and the opportunity it affords us to change our lifestyle, our outlook and ultimately our world. He's an advocate of sailing without an engine, of making the sea our home, and of consciously leading lives that veer toward simplicity rather than consumption. He's an environmental consultant by trade, a sailor by vocation and as a writer and philosopher something of an iconoclast and visionary. He is currently homesteading in Hawaii, while preparing his next liveaboard. One of his blogs has a picture of a nice big Wharram cat slated as the next boat, but when I asked Jay what he's building he replied  that in his front yard he's working on a 30' proa and that if he's satified with the results he plan's a 70' steel version.
Jay will be known to many of my readers for his seminal works on seasteading and engineless sailing. In reply to my query about the origin of the word seasteading Jay told me that it's first known usage was by legendary designer Uffa Fox. Been around a little while.
I also asked Jay for his opinion of the work of Patri Friedman et. al. to establish' micronations' at sea vis a vis some kind of very large structures which might resemble floating oil drilling rig/platforms. His response was succinct, decried the likely waste of grant money that could have been used more productively and voiced scepticism that these pursuits would ever come to fruition. I agree.
Jays books are "Sea-Steading", which you'll find in my bookstore, "Sailing With Purpose: The Pursuit of the Dream" and "Wind and Tide: An Introduction to Cruising in Pure Sailing Craft". He's got a website devoted to promoting sailing without mechanical means called The Oar Club, and two blogs, both recommended, Sensible Simplicity and CommonStrike and a website for his Sea-Steading Institute. His is a voice crying out for the wilderness and an approach to living with and within it in a manner that makes sense. Never more cogent and relevant than today! I'd like to leave you with Jay's words,
"The model of Sea-Stead I suggest is based upon a sailboat that has been built or modified to provide an individual or family a home on the sea. More than a cruising sailboat or a recreational vehicle, this vessel is designed and equipped to provide for both shelter and livelihood, allowing its residents to live perpetually,albeit semi nomadically, where fortune and safety might lead them. This is a very special kind of vessel and a new one—although many traditional lessons learned through vessels of other types might well be of use.
There has been, in the last ten years, a sort of movement within the idea of Sea-Steading that has attempted several different forms. Several sorts of modified oil-rig platforms and other very complicated structures have been posed. Without exception they have been expensive and ungainly. What has mystified me is why the obvious solution—the sailboat—hasn’t been much considered, although perfectly functional and non-experimental examples exist!"
top photo is of Jay's old boat "Macha" which has been sold and is blogged about here.  She's a 38' Ingrid gaff cutter that is, of course, without engine.
Posted by Thomas Armstrong at 8:22 PM

right about now, jay might be regretting selling that boat. it's hard to run when your home is on foundations and hard dirt.

He recently had a two-part interview on the Furled Sails podcast (#141, 142). He certainly came accross as someone who doesn't lack for opinions!

I really enjoyed Seasteading on multiple levels, and it's good to read your update on his activities. One other book of note in this domain is the classic (and now hard to find) Sailing the Farm by Neumeyer.

My own priorities for S/V Nomadness have shifted from high geekery (of which there will still be much, of course) to long-term self-sufficiency.

Different goals, different methods. Only time will tell which works the best. As far as I'm concerned, the more people out there trying different things, the better.

A 100 more oil-rig platforms in an already crowded coastal ocean? The sheer inconsiderate arrogance in the first sentence here is appalling.

I think there is room for both seasteading flavors; they address completely divergent needs and community models... and they certainly scale differently. Personally, I prefer agility and the freedom to migrate as needed. But existing decommissioned oil rigs could support some interesting islands of humanity as well.

"We oil-rig seasteaders wish to build cities on the ocean, not tribes of sea nomads."

I'm with catamaran on this one. I don't think building cities on oil rig platforms is such a good idea. It sounds aesthetically very unappealing and potentially a real drain on resources in delicate environs. I could perhaps be persuaded if I saw this in action, but in general I think we need to form smaller communities, not a hundred sailboats, but 3 or 5 or 9. I'm for thinking small and leaving as small a footprint/wake as possible.

Who said anything about the coast, or its delicate environment? We are planning to start there, but the whole point of (my kind of) seasteading is to settle the deep ocean. Where there is plenty of room, and the environment is not exactly sensitive.

Unlike oil rigs, our platforms are free-floating.

You can't make a village of 100 sailboats? Funny, the Salone people have been doing exactly that for a thousand years.

Excuse me, your ignorance is showing!

GREAT! Floating platforms. Just what seafarers need – more inexactly charted, potentially drifting large objects to watch out for. Creed O'Hanlon has made the best case yet against this thinking – check out http://tiki38.blogspot.com/2008/09/sealand-part-one.html – he, at least, is a real seafarer with hardcore intellectual and geek credentials who has learned that just cos' you CAN do something doesn't mean you should.

"Where there is plenty of room, and the environment is not exactly sensitive..." This ill-informed crap – has he even spent time at sea? – is coming from the most conspicuous and well-funded of the fixed seastead entrepreneurs. Bloody scarey.

Funny thing, after seeing the picture of Macha with the name in its distinctive lettering, I saw the boat itself and was very surprised! She docks just a quarter-mile up the estuary from where I have my boat.

I lived in Squalicum Harbor in Bellingham,Wa. on G dock while Jay was "living aboard" Renegade and also knew both he and his wife, at the time, while completing Macha in Fairhaven. Point is that while I don't know him very well as an individual I do find his books (self-published)to be technically of some benefit he has not really done much offshore sailing at all. I was on G dock for a solid three years and he was certainly no liveaboard. And that is at the dock. He and his ex did spend one summer sailing about the inland waters of Puget Sound and Canada but that was it. She was on the hard for about 2 years before he sold her off. Basically I just don't understand how anyone can take his opinions seriously. Technically I do think he knows how to sail a boat. Beyond that...let him go 'seastead' on a sailboat for a year or so and let us know how it worked out.