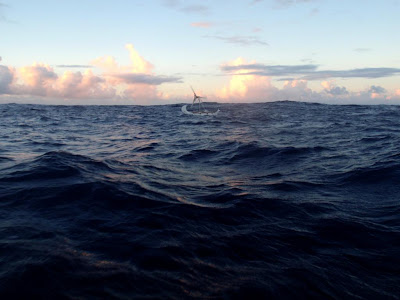 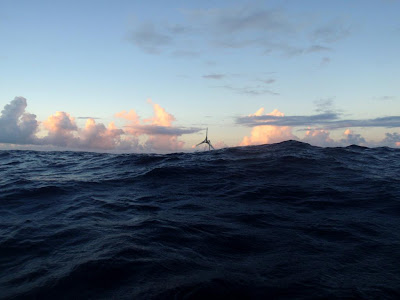 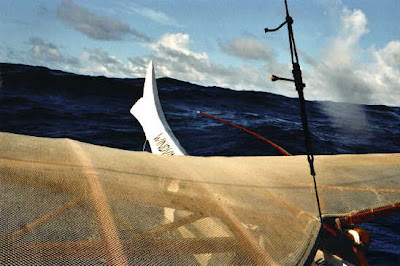 Wipke rode the back of Windvinder for about 300 miles on the open sea. 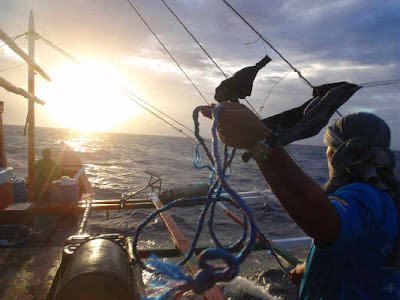 She returned to land aboard this large outrigger canoe, a tuna fishing vessel. 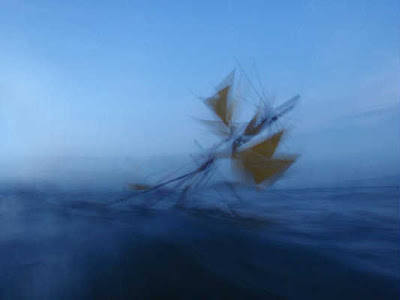 Others have been inspired to build their own Windvinder's and set them free on the open sea. These 'offspring' have been dubbed 'Yellowfin', after the first new vessel, seen here, with yellow 'sails' or wings.

"The strange thing about the Guam reports is that they do not contradict each other. And they come from very different phone numbers. Even from different countries! After all, it’s not so impossible that some kind of Windvinder is underway there. Two old canoes are easy to find, make them watertight, put two beams in between and a single-shaft windmill drive, and that’s it. The single shaft Windvinder doesn’t even need a keel or a center board. As long as it is very small, it can be really easy. Well, nobody has said that a Windvinder has to be big! Maybe the smallest ones have the biggest chance to survive…

The problem is the shaft. Wings could even be made from plywood, for a small six-blade windmill, but the shaft…? Bamboo doesn’t work, I have tried it. Not even for a one meter model. You need something really straight. But the islanders are masters in improvisation…

The more interesting question is, if the Mariana Windvinder really exists, how did he jump there? Most probably he is born north of the typhoon tracks. Or he is incredibly lucky; or both. But some connection with the original Windvinder must exist, because he seems to have our phone number on board. This contact number is not published on this website or anywhere else, it's only written on the Windvinder - and his descendants. " 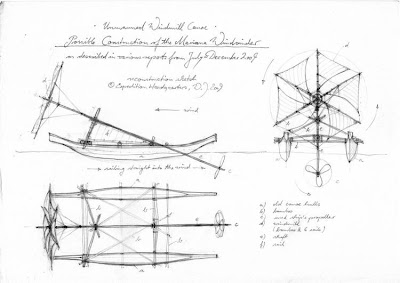 "Possible construction of the Mariana Windvinder, as described in the various reports of the past months: Two old canoes connected with bamboo spars. Windmill and propeller sit on the same shaft, no gearbox is necessary.

The windmill with six sails is not the most effective and certainly not the most storm proof solution, but no other windmill can be repaired or replaced so easily, without any special tools or knowledge. Bamboo and some rice sacks can be found anywhere.

The use of simple sails can be a good way to try out how much sail area is actually needed to propel the vessel against the wind. The sails can be reefed easily by furling them partly or completely around the bamboo.

It's also possible to use only three of the six sails. This could explain why some reports mention "three wings" and others "many"." 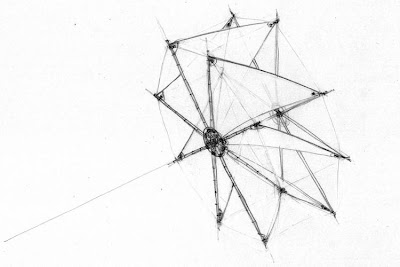 This drawing is a conjecture by Wipke based on reports of a 'sail wheel' as the means of propulsion for the Yellowfin. 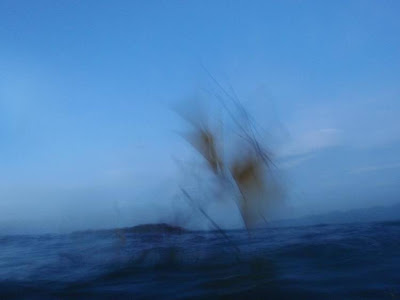 This amazing story just gets better. I thought of Wipke Iwersen and her Windvinder project recently and wondered how things were progressing. So I wrote to Wipke and now she as replied. (Some of my long time reader may recall my earlier article on Windvinder, found here). Apparently, the Windvinder is doing well and Wipke and her team have recieved many reports of sightings, some with photos. He has needed some repair here and there, and recently wipke travelled to the South Seas to complete ome extensive repair work that was beyond what the locals could reasonably be expected to complete. She reports:

"I'm just back: 3 months in Oceania - repairing Windvinder and leaving him on the open sea again. This was not planned - but that's life! Windvinder was on a little island; fishermen had brought him there. Normally I don't hear of these repair-stops at the islands, or only when he is already gone again. (Mail on paper...) But this time they phoned me; the gearbox was broken, and that was something they could not repair on the island. So I took the opportunity to see and help him one more time - very probably the last time! But who knows...

Except for the corrupt officials, the islanders were very nice people. We had a great time, doing all the repairs together. A fantastic launching fiesta, some hundreds of miles of sea trials and a really moving Bon Voyage ceremony when we finally left Windvinder alone again, in the middle of the ocean. I went back to the land with a local tuna fishing vessel, a big outrigger canoe - after some 300 miles on the back of the Windvinder. Unbelievable trip...

There are even new Windfinders - that is REALLY great. Some bigger, some smaller - simple bamboo constructions, but very fast and very seaworthy. Powered and steered by nothing but wind. They have sails instead of epoxy wings. I had heard of them already last year; there were several sightings around the Marianas. But no photos, at that time. (How many fishermen bring a camera for a fishing trip in their outrigger canoe...?) I could only imagine what they could be... (I put some sketches on the Windvinder-website.)
Now I have finally seen them! They are wonderful. The people call them Yellowfin, after the first one who was seen in Southeast Asia, with yellow sails. Definitely the future of the species Windvinder...
A small one was even built at sea by one of the fishermen on our canoe, after we had left the big Windvinder. (There was no material on board to build a bigger one...)
He blessed his boat with the blood of a Yellowfin tuna and left it alone on the ocean."

You can follow up on this fascinating work of art, with many more photos and reports, at the Windvinder website. Wipke plans to begin an Expedition to the Origins of the Wind late this summer aboard Thor, a classis wooden yawl about 50', I'd guess. She's looking for crew for the journey, "The voyage goes from the North Sea to the North Sea, with a detour around the world.
Starting summer 2010.

CREW WANTED
Requirements:
We need creative, enthusiastic, seaworthy people with practical and improvisation skills
People must have good English skills, any additional languages are an advantage
Boatbuilders, aerodynamicists, navigators, oceanographers and anthropologists – graduates or not – are especially welcome
but above all: only experienced sailors!
(in other words, people who know and respect the sea.)"

Posted by Thomas Armstrong at 9:09 PM

This is one of the most fascinating of stories, where an artist's inspiration becomes more than the artist and takes wings of its own, showing that perhaps the true artist is merely a good conduit - a transmitter.

The Yellowfin of course, is a kind of tuna, which is a "king of fish". The entire reason for this voyage was to discover the "source of the wind", or perhaps, the "headwaters". The entire enterprise, in the best maritime tradition, is not so much a voyage of a mere boat upon the ocean, but a voyage of consciousness upon the Id.

I takes me hat off to ye, Wipke.

Yes Michael, I agree, making art is making things to allow transmission of the voyage of consciousness.

What a wonderful project! I'll try to build a model Mariana Windvinder from materials found on the beach, that should be a fun project for me and my kids.