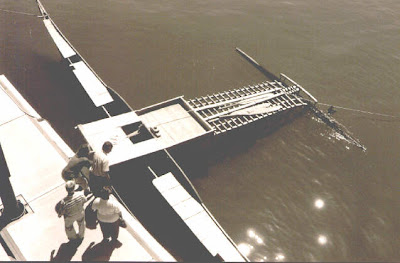 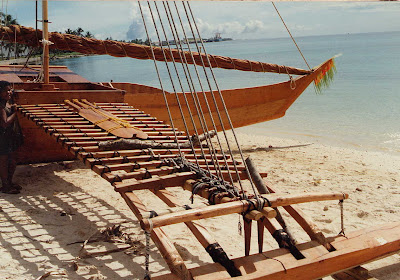 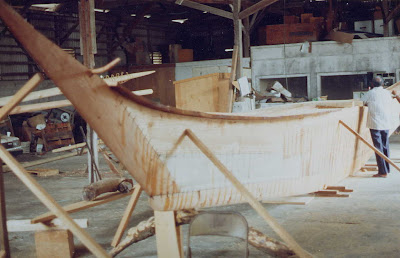 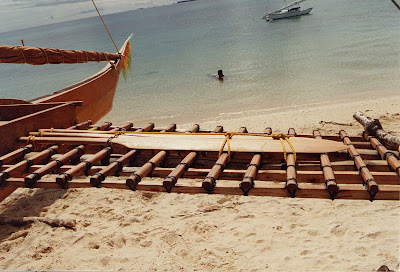 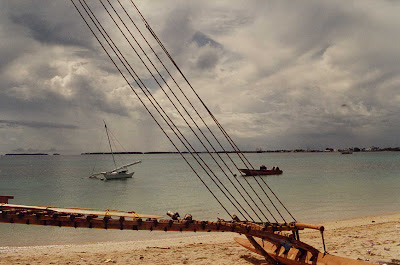 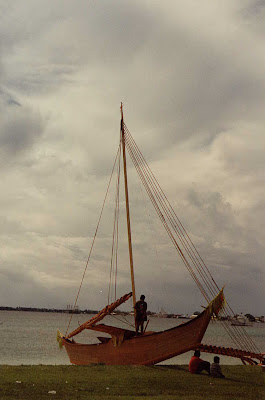 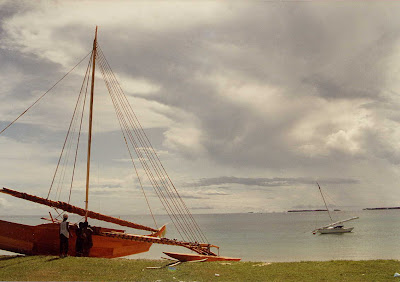 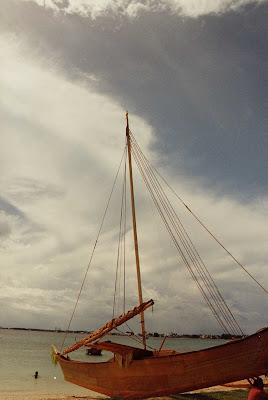 © Dirk Spennemann 1999– 2005
Professor Dirk HR Spennemann at  Charles Sturt University, Albury, Australia, has a research project on the web which chronicles The Marshall Islands as part a digital library of Micronesia. It's a compilation of the culture, history, anthropology, geography, politics and all things Marshall Islands. He has a page devoted to a replica proa built by the project group Waan Aelon Kein which translates as 'canoes of our islands'. This magnificent replica of a Marshallese voyaging proa was launched in 1992 and thankfully Prof. Spennemann has documented his* launch day. It was the project of an initiative headed Dennis Alessio called Waan Aelon in Majel,  which endeavors to impart skills and relieve unemployment among Marshall youth. I found Professor Spennemanns essay through this website, which  is the work of Joseph Oster and which I found  through Michael Schacht. The Waan photo links back to Gary Dierking who supplies an evaluation of its performance written by Dennis Alessio. If you have  an interest in these boats look at all these sites. There's a wealth of beauty and information here.  This Walap may be seen as the culmination of centuries of evolution in proa design by the people who populated the Pacific islands using their extraordinary navigation skills. More later.
*His refers to the proa, which are masculine as opposed to European boats femininity.
Posted by Thomas Armstrong at 8:11 PM

Very cool, glad to see people building those. I'm about to launch my first if I can get some time in--too many sweet potatoes to plant!

The 2.0 I envision is about a 40 foot single hander built for go anywhere cruising built out of steel. Something indestructible you can mash up on a beach anywhere in the world and set up a 16 foot octagon tent on the deck.

Thomas,
Thanks for this! A friend and I built a proa several years ago and the engineering was a challenge, to say the least. Sailing it was also counter intuitive - for a sailor of European style vessels.
The first thing I thought of when I completed my latest project, the bateau "Huckleberry", was that it would make a fine multihull, with double amas. You've inspired me! Maybe I could find an old windsurfer rig. Hmmmmm.....

I thought I would add a link to the site of a friend of my lil bro's to the mix, as a search didn't turn up any reference...

It is the site of Rob Denney, who designs and builds numerous modern takes on proas in Australia