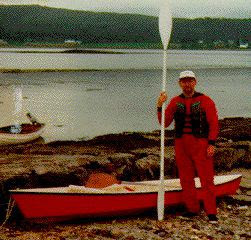 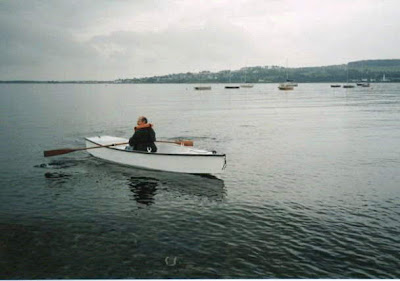 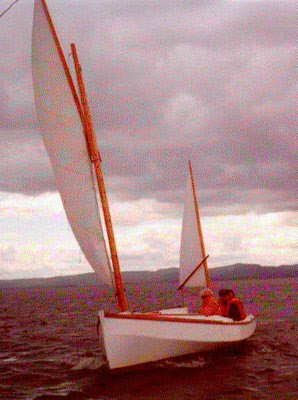 Bill's Chebacco
A little while back I encouraged my readers to send me their reminiscences of Phil Bolger along with any Bolger boats they might have, and I've gotten some responses. First up was Bill Sampson, aforementioned as the longtime editor of the Chebacco News. I asked Bill about the Chebacco and his other Bolger Boats...
Hi Thomas,
The Chebacco was great.  It's big for an unballasted boat - a "dinghy on steroids" was how one friend put it!  So it tends to heel a lot and works best with two or three people aboard to give enough live ballast a breeze.
I sold it back in 2002 when kayaking took over as my main interest.  Two owners later it's still being sailed most weekends!
Bill
Phil Bolger
My first paddling boat was a stitch and glue open canoe called the Payson Pirogue, designed by Phil Bolger “the Wizard of Gloucester”.
Phil’s philosophy was to question accepted wisdom in boat design, and to push the envelope.  His resulting designs were mostly accessible; in that a reasonably competent home woodworker could build them from readily available materials.  In all cases, form followed function.
I had such a great time paddling the pirogue that I decided, in 1992, to investigate other designs by Phil to find a bigger craft that would suit my local sailing conditions, and I chose the Chebacco – a 20 foot sailing cat-yawl.
In 1993 I took a vacation in New England with my family, so I wrote to Phil to ask if I might visit him on “Resolution” - the boat he was living on at the time.  He was more than happy to meet up so one hot July afternoon we arrived to find him there.
He was slightly built, with a surprisingly deep voice.  He was keen to pull out his latest drawings to show them to me and explain the reasoning behind each design.  We sat there for a couple of hours while we went through them.  He took me to Dave Montgomery’s yard to show me the prototype of Microtrawler, which was just about ready to launch.  I also saw the strip-built kayak that Dynamite Payson had built to Phil’s design – a very elegant craft indeed, and much used by Phil.
I never met him again, but we continued to correspond when I became editor of Chebacco News – a newsletter for builders and sailors of Chebaccos.  These can be found at www.chebacco.com under the ‘Old Articles’ tab.
During the years of our correspondence I found we shared an enthusiasm for Arthur Ransome’s ‘Swallows and Amazons” series of books, and we swapped books and information about these.
Phil leaves a phenomenal legacy of some 680 designs.  These range from the tiny ‘Shoebox’ tender, to the Frigate HMS Rose, that featured in the film “Master and Commander”, where it was used to represent HMS Surprise.  He designed a number of canoes and kayaks – most of them delightfully simple.  His designs range from achingly elegant powerboats to some very bizarre-looking craft that turned out to be surprisingly effective in their roles.  One such was June Bug – a slab sided, plumb-bowed tender that turned out to be extraordinarily stable and seaworthy.  I built one of these and it was known locally as “the Battleship”.
He published several books of his designs, each a delight to read.  His essay about each design covers its rationale in terrific detail, and is sometimes accompanied by a short story which sets the scene for how he envisaged its use.  His self-deprecating wit was priceless, too.
Phil Bolger was a one-off.  He is irreplaceable.  He will be sadly missed by all who encountered his designs, his boats and his writings. 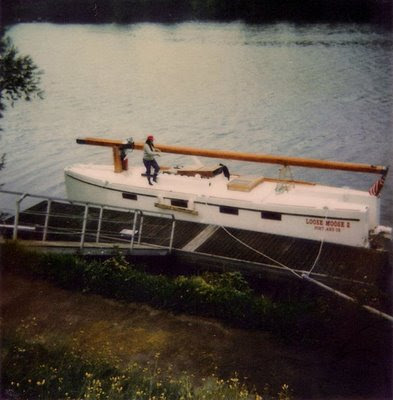 Loose Moose, courtesy RLW
I also heard from Bob of BoatBits who has also built several Bolgers as well, including the advanced sharpie above, Loose Moose. Bob says:
By the way I'm glad to hear that someone like 70.8 is doing something on
Phil as over the last couple of days I keep reading stuff from people
who don't quite get what made Phil so important... It was not the
sharpie or the home builders boats it was simply that he was this
brilliant guy who knew more about boats and rigs than anyone and never
allowed himself to do the same old same old. He simply did what felt
right and in doing so he allows the rest of us to do it as well.
There's a good deal more on Phil on Bob's BoatBits Blog. 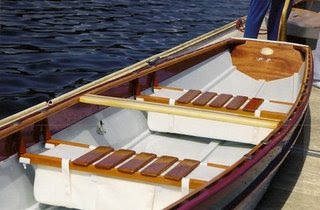 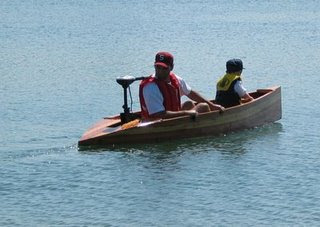 these two photos courtesy David Anderson
David Anderson responded by writing a post on his blog and sent me an email heads up. He said this about the two boats pictured above, but there's lots more here.
The first, was a sort of box boat, warped to get the aesthetic I was after. It was commissioned by my Mom and her husband Bill to fit exactly in a virtual box, the space just behind and no higher than the roof-mounted air conditioner on their motorhome. Twelve and a half feet long, thirty inches or so wide, and fifteen inches deep. Stable with capacity for two. The result was a modified punt.
The second boat shows the Bolger influence perhaps a bit more directly. Ironically, I ended up strip planking this boat despite its design for sheet construction and with no beveling required on account of the plumb sides. In fact, I glued up the strips in panels on the floor and then wrapped them around a jig as if they were plywood. The result was an "Electric Slipper Canoe." Dig it.
And finally, Paul Glassen of Brtitish Columbia sent this, sorry, no pictures.
I have been reading Bolger for 40 years starting (with articles) before the publication of Small Boats in 1973.  My copy of it is yellowed and well worn.  My copy of Boats with an Open Mind is also well worn and indexed with post-it tabs for favourite designs.  And, inevitably I have built several of his designs up to the twenty foot sharpie Otter, a very old design now but one that foretold many of the directions his designs would subsequently follow.
I met Bolger briefly at Mystic Seaport, Connecticut, in the mid-1970s.  Our exchange at that meeting became the basis of an amusing correspondence twenty years later.  I told him I had built several Yellow Leafs (Leaves?) with the kids in a school boat building program, only, for the instructive value, we had built them out of solid timber with cross-planked bottoms and cotton caulking (and seats and oarlocks for rowing).  His reaction to this information was to exclaim rhetorically, "What did you go to all that work for!?"  The design of course was intended as one of the first 'instant boat' builds with the expanded sides laid out for lightweight, even disposable, plywood/lumberyard materials.
Many years later Bolger designed an economical version of Herreshoff's Rosinante, called Burgundy, if memory serves, to be built 'instant' style but with solid timber and cross-planked bottom - just the way I had built the Yellow Leaf(ves) years before.  He credited the idea for this construction to one of his professional boat building friends.  Writing to inquire about another matter, I couldn't resist chiding him that had he listened to this brazen amateur that day at Mystic he would have come to the construction idea some years earlier.  Gracious as always, he wrote back thanking me for "the good letter" and conceding the point.
R. Paul Glassen
Nanaimo, Vancouver Island
British Columbia
Posted by Thomas Armstrong at 6:07 PM

Nice tribute. I actually built a june bug last year, with the help of a six year old daughter. It was a great experience, taking my time and learning tons of skills. The boat is a great river boat, with a small electric trolling motor and oars. Bolger's books are fascinating. Wish I could have met him too, but thanks for sharing those stories. Peace.