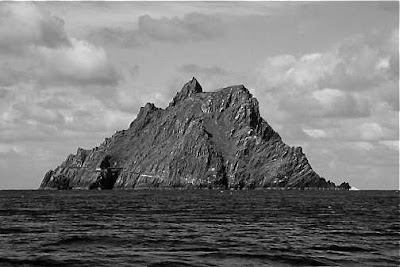 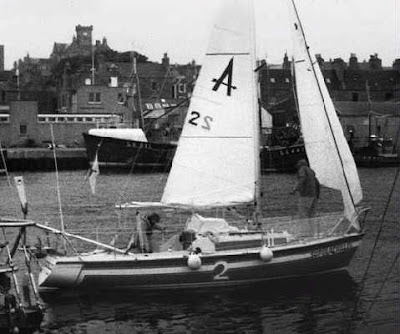 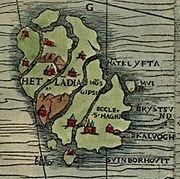 An inaccurate map of Shetland from the Carta Marina of 1529, courtesy Wikipedia 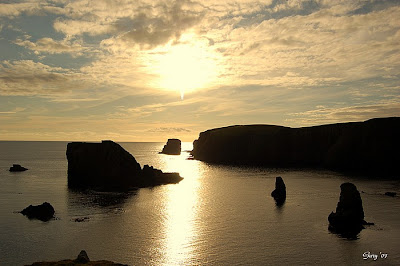 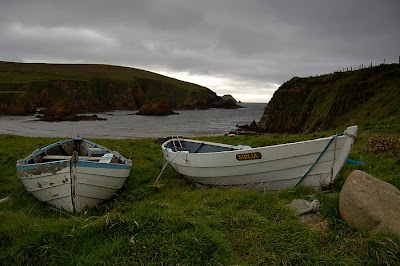 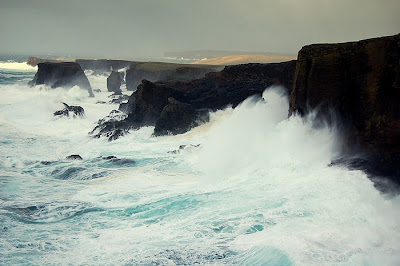 Shetland Islands, coutesy Eyefetch
Skelligs: 51° 4’ The 'N, 10° 3’'W We plotted a course north from the Skellig Islands, seven nautical miles off the coast of County Kerry, to Achill Head, the westernmost island extremity of County Mayo. It spanned more than 140 nautical miles of open ocean across the wide gulf of the Irish west coast. Off Achill Head, we would alter course again and with luck, carry the prevailing south-westerly wind all the way to Eilean Barraigh, in the Western Isles of Scotland, the so-called Outer Hebrides.
Skellig Michael, or Great Skellig (from the Gaelic “sceilig” or “sea rock”), the largest of the two Skellig Islands, is a forbidding spire of slate-grey rock that thrusts 215 metres straight out of the Atlantic. It looked like the peak of an underwater alp, materialising out of a grey sea mist to loom less than a mile ahead of us as we headed a south-going tidal stream in a light breeze. As we closed it cautiously, we could just make out some of the 670 steps carved into its face to form what the writer Geoffrey Moorhouse once described as “a stairway to heaven”. The steps actually lead to the remains of an abbey established in AD560 by St Fionan, a follower of St Brendan, with whom, legend has it, Fionan sailed from the Aran Islands, further north, all the way across the North Atlantic to Nova Scotia in an open, leather-hulled curragh. It was from the peak of Skellig Michael – where, a reference from the third century recalls, Daire Domhain, the legendary “King of the World”, rested before an epic battle of a year and a day against the giant, Finn McCool (Fionn mac Cumhal), and the Fianna, a band of noble, bardic warriors – that St Patrick, aided by an apparition of the archangel St Michael, banished the last venomous snakes from Ireland for all time.
Skellig Michael’s desolate grey slopes are pocked with crude, igloo-like hovels – the rough-hewn stone walls are nearly a metre thick – and small cells carved into almost sheer rock faces. There, for 600 years, hermitic monks managed to eke out a hard-scrabble existence comprising prayer, scholarship and the routine chores of survival.
We ghosted between the ragged peaks of Great and Small Skellig, stood out to sea. Another few hours brought the coast of County Galway abeam, a green-black smear low on the eastern horizon. Here, with a simple running fix plotted on a chart in pencil, I closed the circle of a voyage that had began in the 1850s, when both my paternal great-great-grandparents and their families sailed from these shores to Portland in Victoria. None was a seafarer, and the long voyages they made aboard three-masted sailing ships, south through the Atlantic and east about the Cape of Good Hope to run hard before the relentless gales and high seas of the Roaring Forties, were likely the first time any of them had ever ventured on the ocean. Up to their eyes in debt as tenants on small, rural lease holdings, near inland villages where their descendants still live today, they must have clung to the hope that their new lives as free settlers – as goldminers, farmers, graziers and policemen – in what was, not long before, just a far-flung English penal colony, would be better than the ones they had left behind.
My reasons for returning – and for sailing even further northwards, to islands long abandoned by whole communities that, after several generations, were finally defeated by the isolation and hardship of these unsheltered, gale-lashed shores – were less clear. My voyage was a voyage of hope and discovery, not to new lands, but to lands so old that it was as if there was never a time in which they had been unknown, unexplored. And somewhere between one distant landfall and the next, there was a vague chance the past might help me to decipher an incomprehensible present.
Posted by Thomas Armstrong at 11:43 AM

Any idea the model of the row boat Sonja in the picture above? Or any plans that show something similar?