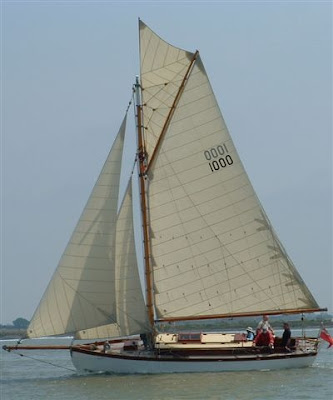 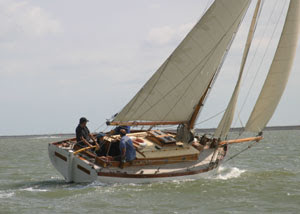 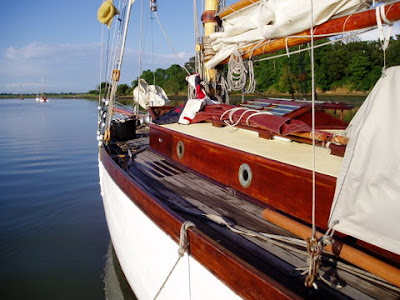 courtesy Roger Taylor
Roger Taylor, skipper of Mingming,  and author of Voyages of a Simple Sailor is reluctantly offering his 1934 Gaff Cutter Mary Ellen for sale. Roger is preparing to leave shortly for the Arctic Ocean on Mingming, and gearing up for the 2010 Jester Challenge. Here's the lowdown:
Mary Ellen was built in 1934 by Kidby and Sons, Brightlingsea, Essex. They were builders of fast smacks and built her to their own design as a gentleman's yacht for a local farmer. The hull shape is that of an Essex smack, but with a spoon bow and a transom stern.
LOA 38'
LOD 30'
Beam9'
Draft3'3"
Heavily double sawn oak frames, pitch pine planking, solid mahogany interior, all original. She displaces approximatly 7 tons, has 4 berths in 2 cabins, and a Vestus c.550.
Since 2000, Roger has been making steady improvements, including:
Refastening the hull with bronze screws.
A new hollow spruce mast and yard.
A new Douglas fir boom and bowsprit
New sails by James Lawrence of Brightlingsea
New hand spliced standing rigging
New blocks and running rigging
Roger has an extensive archive on the yacht, which has been cruised as far as St. Petersburg.
Asking £12,000. GBP, or just under $19,500. US.
Interested parties should contact me via email (available at the top of  this page) and I'll put you in touch with Roger.
Posted by Thomas Armstrong at 6:26 PM