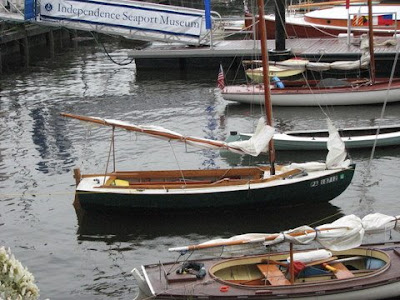 Here are some of the boats, from the bottom, Pepita, a
elonseed Cat designed by John Brady; a Cerlew built by Phil Maynard; a Delaware Ducker owned by the Museum and a Celebrity class racer, Mudhen. 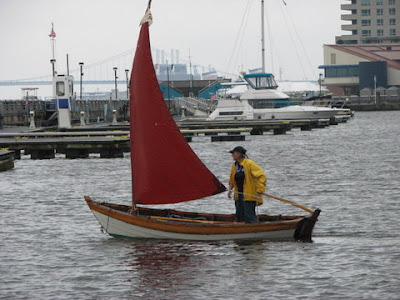 Wendy Byar likes to stand up when sailing her 13' Lowell semi dory.
This is a Salibury Skiff built in1989 and originally owned by Wendy's Grandfather.
Wendy is a mainstay of the WOW and has a blog documenting the workshops progress here.
She tells me she has 10 or 11 other blogs, one devoted exclusively to sailing, but I'll let you know. 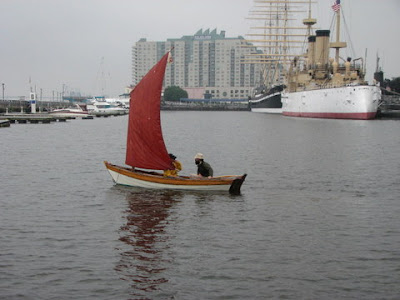 Here Wendy takes my brother John for his first sail, ever! 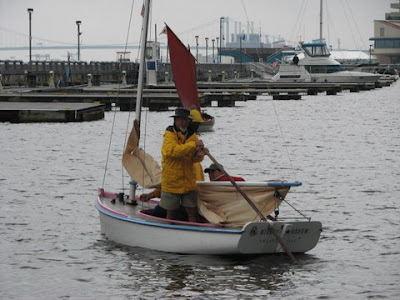 Mighty Sparrow is an Abaco Dinghy built by Thomas Winer Malone in 1957. Malone is recognized as one of the foremost boatbuilders in the Bahamas, having built over 200 of these boats. She's owned by the Florida Maritime Museum and was trailered from Cortez, Fl. to the festival by the director of said museum, Roger Allen, also a member of the TSCA National Council. Roger formerly was director of the Philadelphia Maritime Museum, which became the ISM, and initiated the Workshop on the Water. 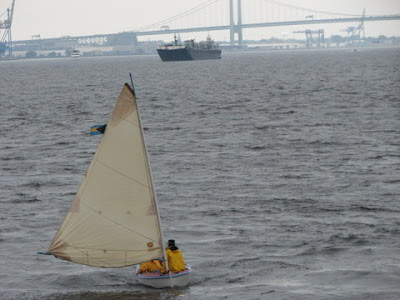 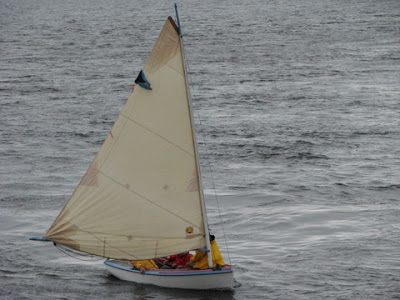 Painted in tradional Bahamian colors, she's built of madiera, horseflesh (woods, not wine and...) , Bahamian cedar and other traditional woods. 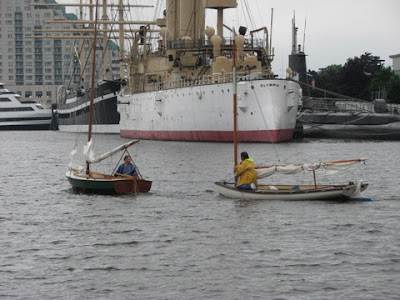 Phil Maynard and Mike Wick ready their boats for an afternoon sail. 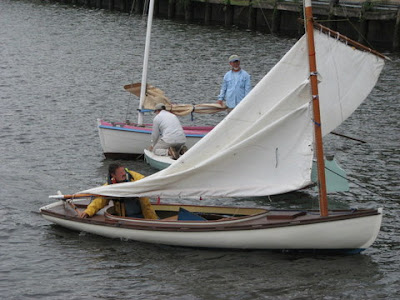 Mike Wick coming back in. Mike's boat, Pepita is a 'Melonseed Cat', so called by her designer, John Brady of the Workshop on the Water. She was built by Carl Weissinger. Mike is the president of the Delaware River chapter of the TSCA. 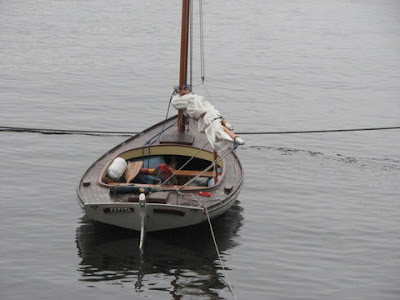 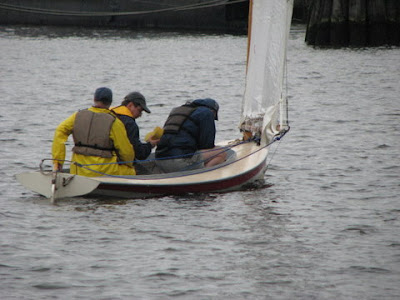 John Brady built this Delaware Tuckup, an early racing class which originated on the Delaware River. 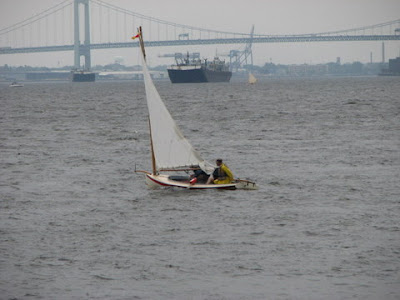 Heading out of the basin into the Delaware river. 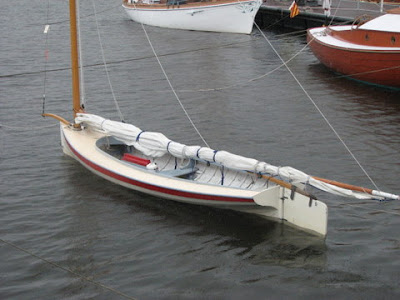 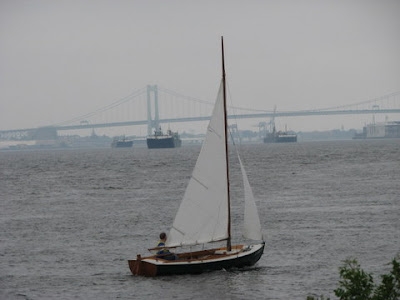 Phil Maynard coming about in his Edwin Monk designed Cerlew. Phil built her himself. 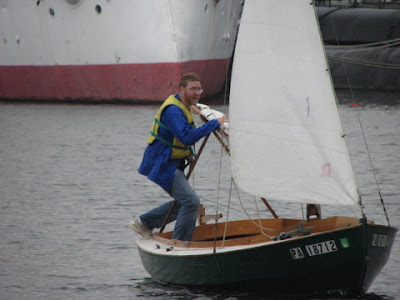 Coming into the basin.
Phil has made some modifacations to the original design. Read about them here. 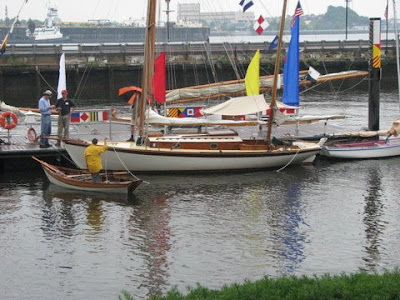 Built by Nick Roth 1977-78, Gwylan (Welsh for seagull) was commissioned by and owned until 1985 by John Cadwalader of Philadelphia, a major player in operation Skyhook. She's now owned by Roger Prichard who has done major restoration. She's an Herreshoff H28 and Roger has singlehanded her , mostly, including a nine day sojourn on the Chesapeake. Roger sails out of Riverton, NJ and brought her over to Philly for the festival. 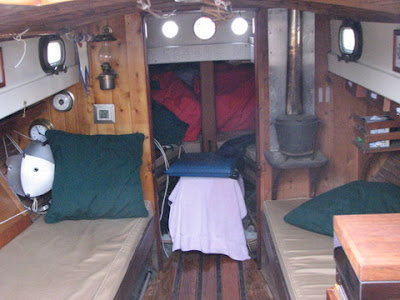 Nice and comfy with a stove to boot. 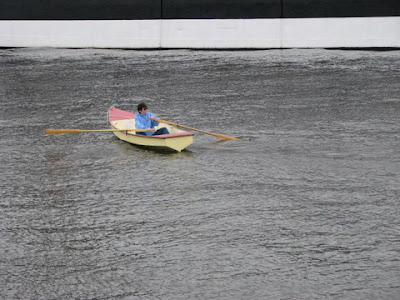 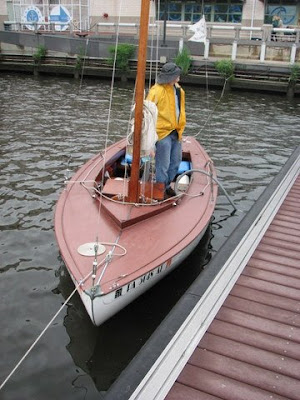 Ron Gibbs' Mudhen, a Celebrity class boat, built in 1963 to a 1931 design, still a viable racing class which originated in Northern Holland, in the Friesland area, They were originally cat rigged but over the years became sloop rigged. Ron rebuilt the centerboard box and the floors on this boat. 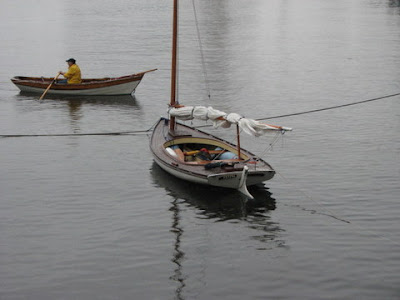 Nice day.
All photos Thomas Armstrong
The Indepedence Seaport Museum held it's second Wooden Boat Festival last weekend. The Traditional Small Craft Association held their annual meeting here, and brought lots of beautiful small boats. In it's second year, the Philly festival is still a nascent affair, with lots of potential for growth. It has a beautiful hosting facility, is centrally located in the mid Atlantic region with many great classic wooden boats, both large and small, within striking distance.
There was Elf up from it's Chesapeake home, and the recently launched Silent Maid, Gwylan, an Herreshoff 28, and numerous smaller traditional and not quite traditional craft. It rained. But the spirits of the participants and the visitors were undampened. Good wind for part of the day made for some exciting sailing on the Delaware River. My brother John had his first ever sail! This event has all the elements in place to become a major event. Let's make it so.
Posted by Thomas Armstrong at 6:16 PM

Wonderful boats. I love stuff like that, but having a seriously warped mind I also like PDRs, too, which are more within the range of my abilities.

Fantastic! I wish we had a Melonseed or two out here so I could see how one handles.