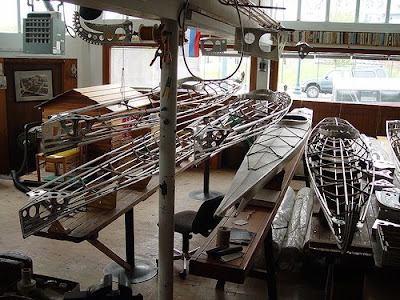 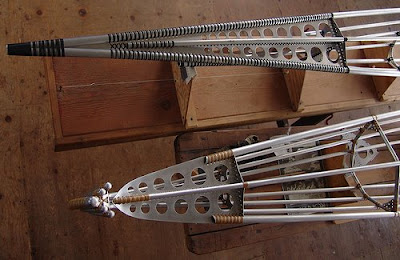 Frames displayed at the storefront 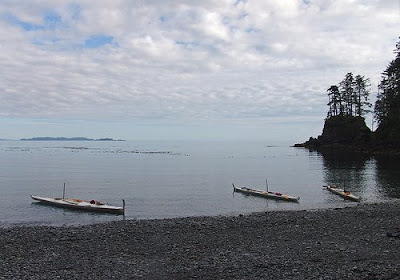 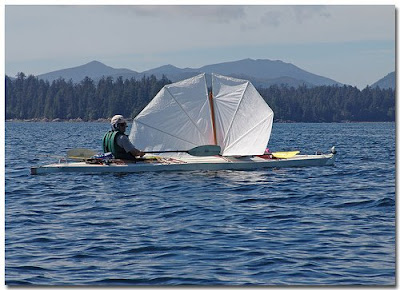 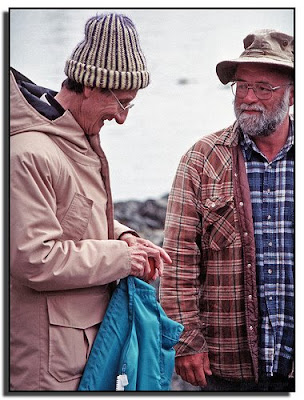 George and his father Freeman 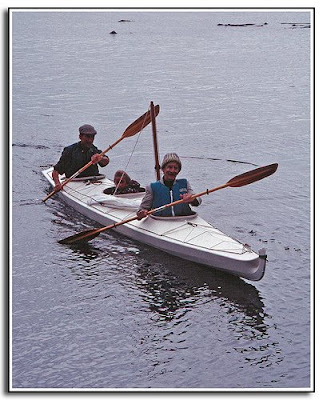 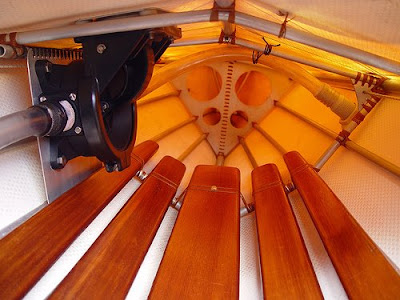 Interior of a Dyson boat with a redwood floor 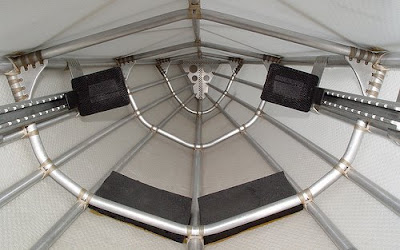 Another interior, this one is a James Shields replica 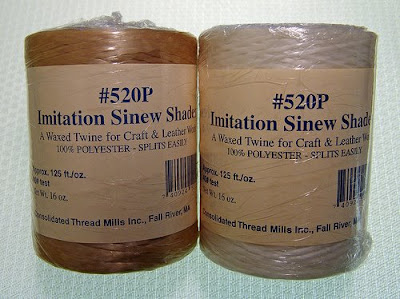 Imitation Sinew, one of the products availanle at DB & Co. 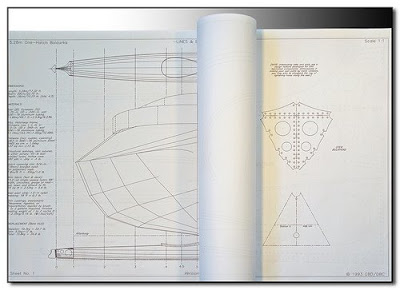 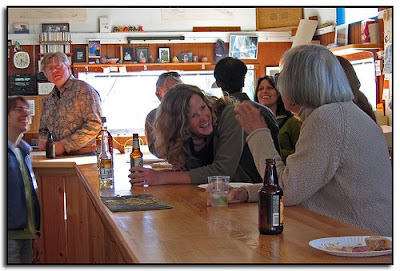 Opening Day at the new bar 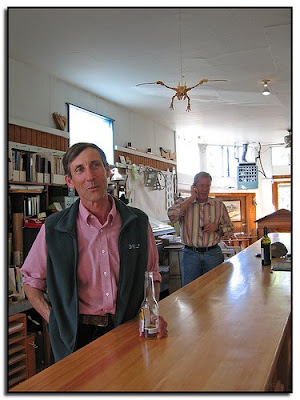 George relaxing, I think, opening his bar
All photos courtesy Thomas Gotchey
Certainly the single most important figure in my developing interest and understanding of the traditional kayak has been George Dyson. First I read the Starship and the Canoe, Ken Brower's book about George and his father Freeman Dyson, a noted astrophysicist which takes one through Georges early years, his treehouse in the woods near Bellingham  and his discovery of the badairka. Next came George's opus on the history and evolution of baidarka, aptly titled, Baidarka! It was a revolution for me in the mid eighties, informing me of the Russian history in Alaska, and the development of the baidarka before and after European contact. George also applied high tech materials to skin on frame constuction, aluminum for the frame, high strength nylon for skin, introduced a sailing rig, all without compromising the basic Aluet design genius. And began to build them. And to help others build them. And to make the materials available , through Dyson Baidarka and Company. In a phone conversation with George in the 80's, he was affable and encouraging. I doubt that has changed, notwithstanding the fact that he has since become a highly respected author of books on the history of science with Darwin Among The Machines: The Evolution Of Global Intelligence and Project Orion: The True Story of the Atomic Spaceship. For many years Dyson, Baidarka and Company have maintained a storefront space at 345 West Holly Street in Bellingham as a workshop and showroom, and recently added another public amenity, a bar! Almost too good to be true, but there it is. I am indebted to Thomas Gothcy for the photos and his communication on George. Thomas helps with the store and the builds. He is also responsible for these great photos. A climber and ardent hiker, you can find out more about Thomas here. I would like to add in closing, that I think that Mr. Dyson's kayaks are some of the most beautiful I've ever seen. You can write to 431 W Holly St. Bellingham, WA 98225 or phone 1.360.734.7226.
Posted by Thomas Armstrong at 7:24 PM

It is curious how the idea of the voyaging canoe and the starship intertwine.

Freeman Dyson was an astrophysicist, and Bernard Smith was a rocket scientist. I can't help but be reminded of that old sci-fi chestnut: "This Island Earth". If earth is an island, then a starship is a canoe.

Cool post. I've been a huge fan of Dyson since Starship and the Canoe.

I do agree about the parallel between canoe and starship: I've often thought that the Eastward settlement of Polynesia was a neolithic "space program".

Freeman Dyson was the mathematician behind the firestorm at Dresden,WW II