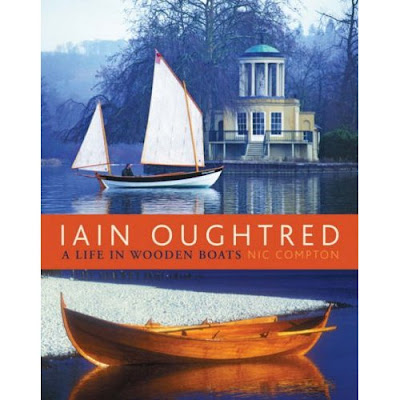 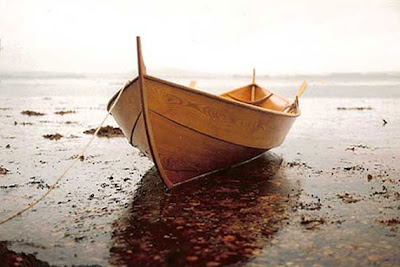 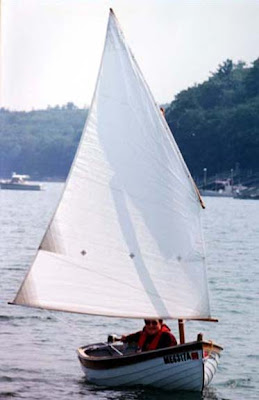 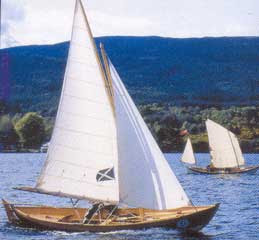 The Arctic Tern, says Iain, is a 95% scaled down Ness Yawl. These boats take their inspiration from the Shetland Yoals, but are lightened and narrowed for faster recreational performance. This example has a gunter sloop rig,  giving increased windward performance
courtesy Classic Marine 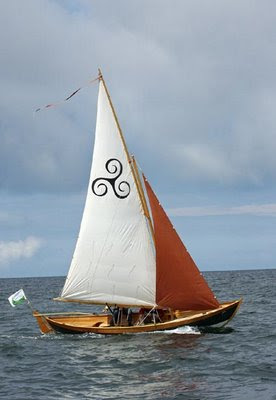 Jeanie II, the prototype for the Arctic Tern, named for Iain's mother. 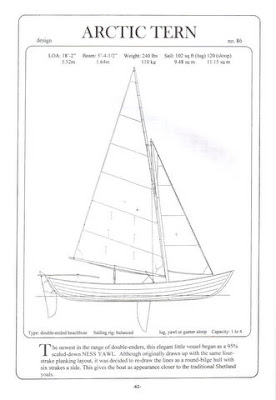 The Arctic Tern profile drawing as found in Iain's design catalogue, a desirable piece of literature, which can be ordered from Iain . Find his mailing address below. 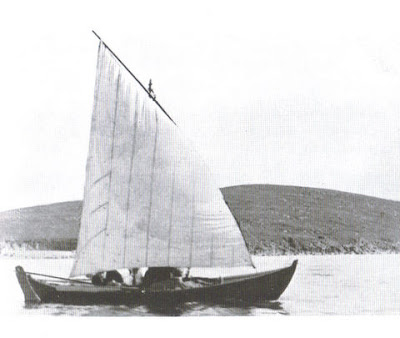 For comparison, here's a photo of a Shetland Yoal, a foureen from about 1895 with a high peaked lugsail, found in " Inshore Craft of  Britain" by Edgar J. March 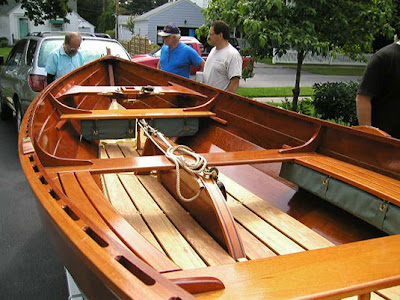 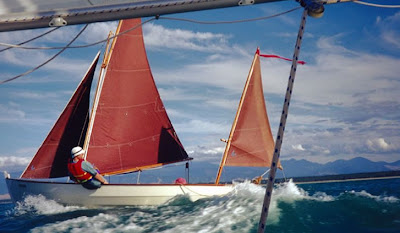 One of  Iains most popular designs, the Ness Yawl
posted by Wayne Torry, found in the WoodenBoat Forum,
this photo was originally taken by Owen Sinclair from his Welsford Navigator and is of John Hitchcock's Ness 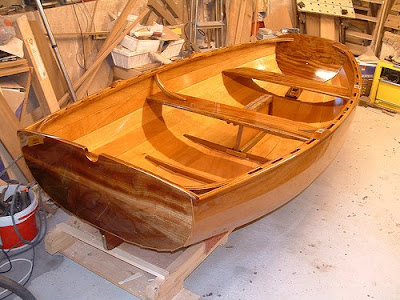 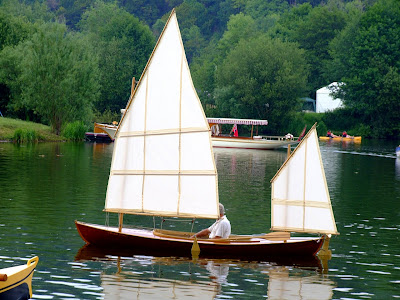 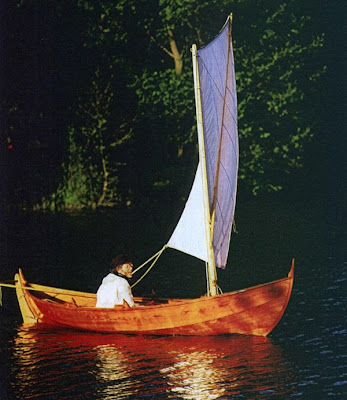 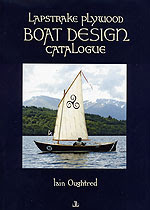 Cover of  Iain's design catalogue which is in itself a formiddable work of art.
Order from iain direct at the address given below. 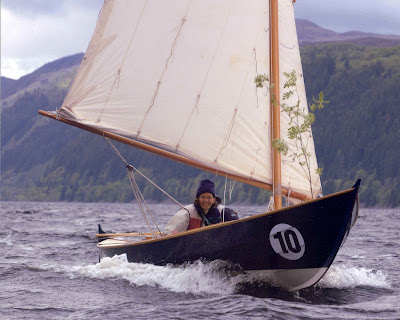 Albannach, or Alba, Iains own Ness Yawl, is now for sale. Details here.
I believe this boat has won a Glen Raid or two 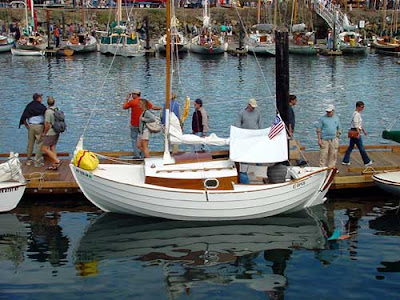 A Wee Seal at the Port TownsendWooden Boat Festival (I have no idea what year)
courtesy John Welsford, a formidable small boat designer in his own right, via  Duckworks Magazine 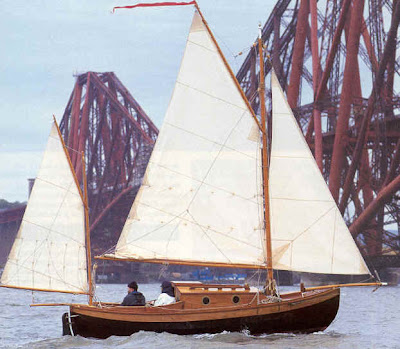 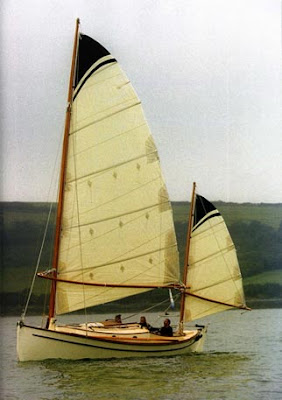 Haiku, Iain's interpretation of Ralph Monroe's noted sharpie Egret
There's an article on the designing and  building of this wishbone cat ketch to be found in Water Craft #61 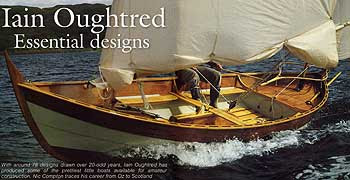 I've included this photo simply because I found it compelling, a Ness or Caledonia Yawl, most likely, but I was intrigued by the extended stem and stern  posts, a more traditional Norwegian detail
courtesy Bootbouwer
Author Nic Compton, in colusion with WoodenBoatBOOKS and Adlard Coles has produced a sumptuious feast of a biographry about Iain Oughtred, his life and his designs. It takes one from Iain's early years in Melbourne and Sydney, his migration to Britain and his participation in the wooden boat revival there, and his eventually settling in his adopted homeplace, beloved Scotland. It also chronichles the arc of his career and follows the development of his design philosophy. The book also includes a beautiful design catalogue. Copious photographs accompany and illustrate the text. Biographies are often slow going, even a bit moribund, but for me this one (so far anyway, I haven't finished) reads more like a thriller, pulling you forward, wanting to find out what happens next. Iain started his sailing career as a racer and has  not denied these roots in his design, even as he turned more and more to maritime tradition for his inspiration. His entire ouerve has seen him grounding his designs in seaworthy tradition while updating them for contemporary use, building techniques and speed. He has been instrumental in putting forward the lapstrake plywood/epoxy building program (he wrote a book on this technique), and his design always takes into account the homebuilder. Mr. Compton has knit all this together into a flowing narrative that stays out of the way and allows the story unfold like a satisfying afternoon sail. Highly recommended. Iain Oughtred's life is and has been an extraordinary journey and this book is testimony to it.  Amazon is taking orders, but you can get the book now at WoodenBoat. I suggest you do so.  Iain doesn't maintain a web presence but some of his plans are available through WoodenBoat, Classic Marine, Jordan Boats UK or directly from Iain  the old fashioned way, here:
Iain Oughtred
Struan Cottage
Bernisdale
Isle of Skye
IV51 9NS
Tel: 01470 532732
Iain is selling his Ness Yawl, Albannach, offered on the Jordan site.

Posted by Thomas Armstrong at 12:02 PM

Thanks Thomas for letting us know about this biography.

What a post! I haven't (yet) built a boat, but I did purchase a set of his plans for the sailing canoe.

For a slightly different take, I reviewed Compton's biography some time ago. http://intheboatshed.net/2009/07/31/iain-oughtred-a-life-in-wooden-boats-a-sympathetic-biography-by-nic-compton/

For a slightly different take, I reviewed Compton's biography some time ago. http://intheboatshed.net/2009/07/31/iain-oughtred-a-life-in-wooden-boats-a-sympathetic-biography-by-nic-compton/

To follow up on Gavin's comment, I'd suggest that you take his advice and read his review, maybe a little more than slightly different and perhaps far more perceptive, but in any case worth a look, and if you are not familiar with intheboatshed, please acquaint yourself.