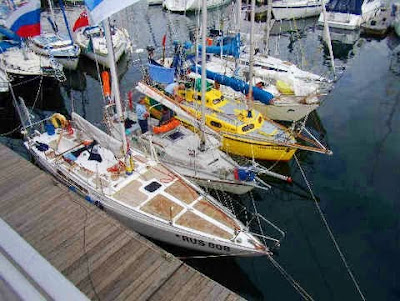 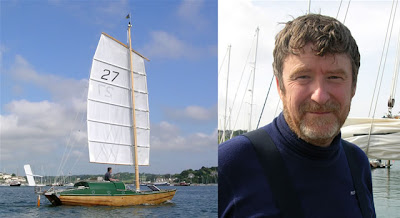 Trevor Leek, one of the organizers, will be sailing the reborn Jester 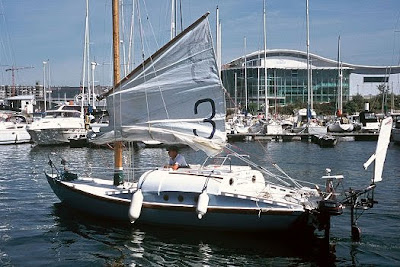 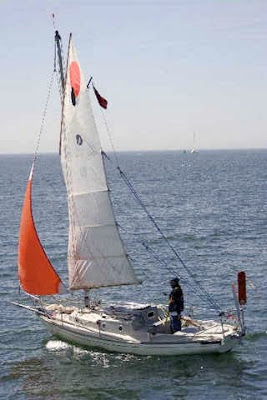 Roger Taylor's minimalist entry Mingming, a modified junk rigged Corribee MK1.
Roger is planning to start with the fleet but then take a divergent course, in a move reminiscent of Moitessier in the Golden Globe, and head for Baffin Island. I'll have more on Roger soon 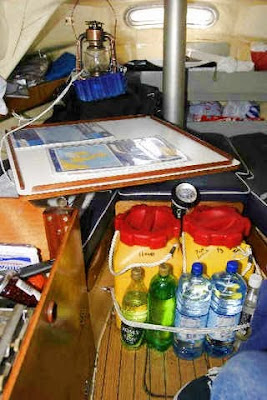 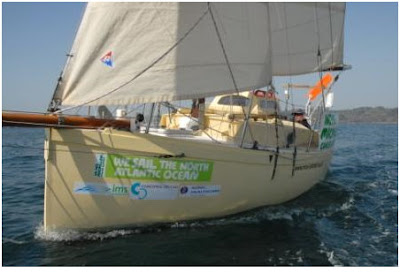 The smallest entry in this years Challenge at 20', the self built Golant Gaffer Just Right, is Gus Davidson's entry. She is sailing in support of Macmillian Cancer Support. 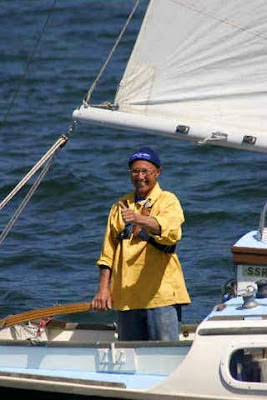 Bill Churchouse and Belgean will be looking to repeat his performance in the '08 Azores, where he was first in. 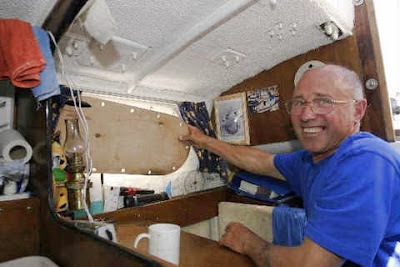 Here's Bill in the cabin of his Westerly 22 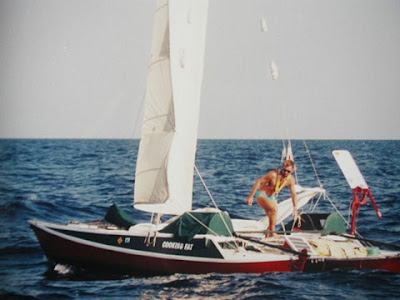 Rory McDougall built his Wharram Tiki 21 Cooking Fat and then sailed her around the world, being the smallest catamaran to do so. 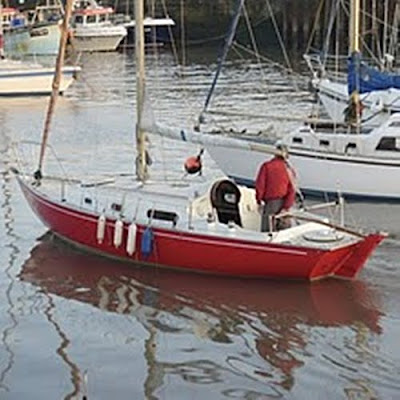 Guy Waites will be sailing his Contessa 26 Red Dragon 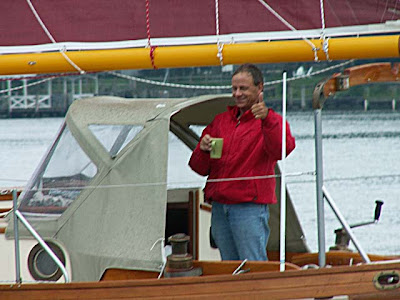 Thomas Jucker's 28' Lyle Hess Bristol Channel Cutter built by Samuel L Morse in 1990. Marta was bought in the US for the express purpose of entering the Jester Challenge. Feeling unsure of his single handed capabilities, Thomas tested himself over the summer of 2009 by sailing first to Bermuda, then the Azores, and England. 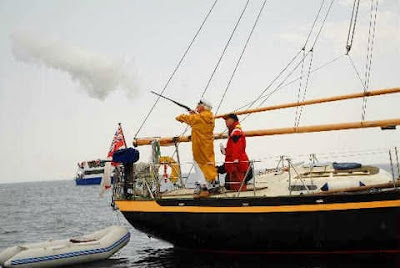 Here we see the starting gun being fired (2008) with it's plume of talcum powder to make it visible to all entrants. the shot is fired from Ewen Southby Tailyour's Black Velvet by the late Mike Richey. Ewen is one of the organizer's of the event, and also a participant.


"Camaraderie, fun and a lack of formality are the guiding principles: in effect these Jester Challenges are organised by those competing in them"

This yaar mark the 50th anninversay og Blongie Hasler's ' Amazing Idea'
This year's Jester Challenge is set to commence to the starting blackpowder blast at 1300hrs on Sunday, May 23 from Plymouth England. First run in 2006, The Jester Challenge has been instituted to restore to open ocean racing the spirit ot of Blondie Hasler's 'Amazing Idea'. The race is from Plymouth, England to Newport, RI. This will be the second time the Challenge has been run from Plymouth to Newport, the first was in 3006, with an amended version to the Azores taking place in 2006. It is a single handed race for boats under 30' intended to revive Blondies' vision of Corinthian, unassisted sailing in small yachts based on self reliance and seaworthiness. It is in fact, a sort of laboratory for developing tools and techniques for singlehanded sailing of smaller boats. Though technically not a raid, because it's not done in open boats, and not about rowing, I would posit that in some sense it is the inheritor of the spirit which allowed the inventors of the raid, the vikings, to sail from Scandinavia to the New World! The mother of all raids.

On the original conception of the Jester Challenge:

JESTER CHALLENGE
Notes by Ewen Southby-Tailyour
Up-dated 23rd November 2005
One of the aims of The Jester Challenge is for the skippers to take full responsibility for their actions and their vessels without nannying sets of rules (nor a £1000 entry fee). Another aim is that it should be FUN with the results not taken too seriously: who wins is less important than arriving safely. Sponsorship of the event and of individual yachts is not overtly encouraged - although Blondie certainly had no objection and was always grateful, knowing that without it his race would not have achieved the status it enjoys. The rules are at a minimum on the understanding that Challengers - as Corinthian yachtsmen - will accept that it is up to them to ‘behave like gentlemen’ with regard to the use of engines, accuracy of timings, numbers on board(!), adherence to common-sense, safety equipment and so on. We want to keep The Jester Challenge simple and un-fussy while proving that events like this can take place without all the hullabaloo and hype - and yet still be worthwhile taking part.
In 1960 Blondie Hasler's 'amazing idea was first sailed by five yachts, four of whom were under 26 feet: navigation was 'traditional', self-steering was 'experimental' and all crossed the Atlantic in good order. The only time that this has occurred. However, by 1968, he was worried that the race's success contained the seeds of its own death, with excessive competitiveness one of the reasons cited. Fearing a demise he planned a Series Two that, if necessary, would begin in 1980 with…no sponsor nor organising club…ordinary yachtsmen going about their (legal) business…making an independent passage on (their) own responsibility…no rules…no entrance fees…treating (the skippers) as adults who can…take their own risks….

This years entry list is a testament to the chord this event has stuck in the hearts of adventurous yachtsmen. The entry list for the first Challenge included 13 brave souls. This year's entry list shows a whopping 82 entrants!

You'll be able to follow the boats as they move across the Atlantic with Ocean Race Track here.

Special thanks to Jake Kavanaugh and Roger Taylor for their assistance in writing this article.

You should be able to follow the 'race' on Ocean Race Track.

Tom, the top picture, the white boat closest to the dock, RUSXXX - looks like a Folkboat with aflush deck - do you know what she is?