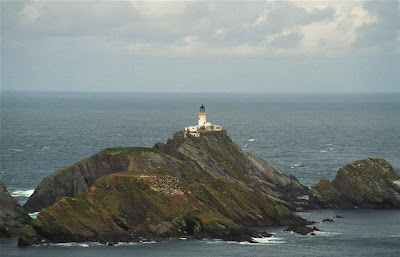 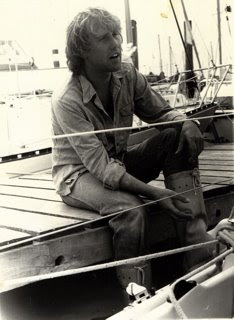 The author at 24, Berthon Marina, Lymington, Hants, UK.
editor's note: Creed has generously shared this series with me for publication. It first apppeared in Australia in the Griffith Review.

It is not down in any map; true places never are.

Muckle Flugga: 60° 51.3’N, 00° 53’W Sunset in summer, in the high latitudes of theShetland Isles, is an uncertain hour the locals call “Simmer Dim”. The sun touches the horizon at around 11pm, and as its lower edge is drawn into the bleak, gunmetal oiliness of the swell, the pale umber cast across the high seaward cliffs begins to recede into shadow.

The light dims, but if the moon is full, the stubborn gloaming refuses to surrender to darkness. A couple of hours later, the sun will rise again, although on many days it will creep above the horizon unseen, shrouded by leaden stratus clouds that descend with the deep depressions that track north-eastwards across the Atlantic to rile the fast, south-going current of the North Atlantic Drift.

We had set off three days earlier from , on Eilean Barraigh (), in the Scottish Western

Isles – my friend, Michael Moulin, and I, aboard a fragile 7.5-metre yacht more suited to inshore day sailing

than the long sea passages that were necessary to get as far as the Western Isles, let alone the Shetlands. We

), the 600-year-old water-bound redoubt of the Clan MacNeill that rises from a reef in the middle of the

bay. Then we reached under full sail through the narrow, rock-strewn channel between Barraigh and the

southern of to the white-capped swells of the Atlantic, before bearing away north-west

towards St Kilda, the grim shark tooth of barren, uninhabited peaks and rocky skerries that forms the

Our course was plotted in the wake of Viking longships that made their escape through these waters from raiding parties to and the west coasts of , and a thousand years ago. They ran for the safety of the open sea on homeward voyages that would take them either north-east to the wide channel between the Orkneys and Sheltands then east to the Jutland Peninsula and the Baltic Sea or, like us, even further north, past the small, rugged islands of Sula Sgeir and Rona – more isolated even than St. Kilda – to a landfall on Unst, the most northern of the Shetland Isles, before rounding an outcrop called the Outer Stacks and laying a course to the fractured coast north-west of modern-day Stavanger, in Norway, where long, witch-finger fjords had been cleaved between high, sheer walls of rock by the stormy Norwegian Sea. Sailing deep within them, across sheltered waters as still and dark as molasses, the Norsemen would at last reach home – small, fortified settlements built close by the shore on rich grasslands coloured with star hyacinth and purple heather and backed by sloping stands of pine, spruce and juniper.

We had made our landfall off Gloup Holm, a small island off the north-west corner of Yell, one of the larger Shetland Isles. We had drifted a little further eastwards than we had planned. Two nights before, we had been forced to reef – and later, to hand – our sails in a rising south-westerly wind that veered westerly as we rounded St Kilda and became a severe gale. The steep following seas gained height and power as they rolled in without obstruction from the and crossed the continental shelf. Solid water tumbled over the yacht’s transom into the open cockpit, sweeping us from our seats. Steering by hand became too dangerous. We lashed the tiller to leeward and let the boat drift a-hull as we took refuge in the cabin. More than once, a breaking crest tipped the yacht onto its gunwales, laying its mast in the water. We held our breaths as the hull shuddered, then plunged, as if in slow motion, down four storeys through the wave’s foam-streaked, perpendicular face. Only in the eerie, momentary windlessness of the trough did the righting moment of the vessel’s lead keel assert itself to lever the rigging from the sea.

Now the wind had dropped. The grim scud had dissipated and the swell, tinged a muddy brown by the churned-up detritus of the sea bottom and run-off from the shore, was a long, gently undulating lope. In a dying breeze, we closed the cliffs of Herma Ness to round the rocky outcrops of Muckle Flugga and the Outer Stacks. Atlantic puffins, clown-like birds with unlikely white and black heads, orange and black striped beaks and squat, rotund black bodies that even penguins would find ungainly, bobbed at the edge of deeply serrated skerries atop which otherpuffins protected nests, each containing just one precious egg, from predatory gannets and guillemots.

Sixty metres above the rookeries, on a lump of black rock too small to be called an island, loomed the Muckle Flugga lighthouse – a whitewashed stone tower, the only man-made structure on that line of longitude between the top of the and the North Pole. It was built in 1858 by David Stevenson and his brother, Thomas, father of the writer, Robert Louis Stevenson,who visited the light with his father and later, it is said, used a map of the tree-less island of Unst, off which Muckle Flugga lies, as inspiration for his novel, Treasure Island.

Posted by Thomas Armstrong at 8:56 PM