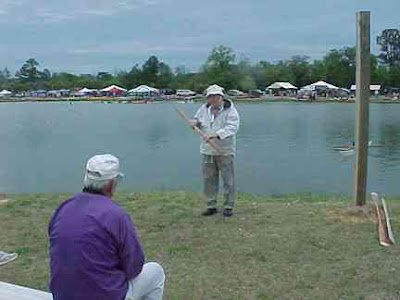 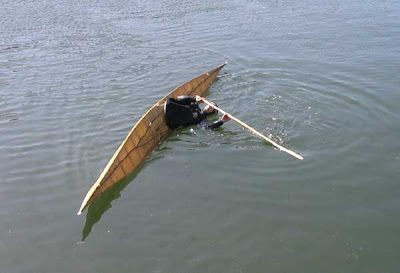 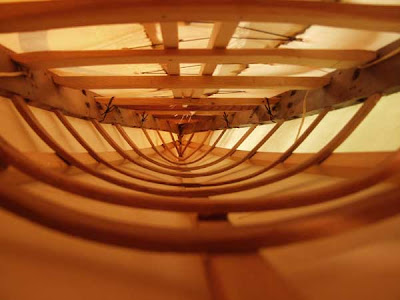 Interior shot of the replica
John D Heath and Dr. Eugene Arima have both made huge contributions to the history and ethnography of the indigenous watercraft of the North. The current culture of revival of skin on frame Kayak would not be the same without their contributions.  Eugene Arima is a an ethnologist who has written extensively on artifact kayak, Inuit culture and oral tradition and also has deeply studied the culture of the Northwest Coastal tribes. He has worked in Canada for most of his career and is currently in Ottawa with Parks Canada. He has surveyed, drawn and published many, many kayaks and is considered one of the worlds leading authorities on these elegant weapons. He is still working as an ethnographer.
John Heath  was Texas born and drawn to kayak. In the mid 1950's  as the kayak began to rise in popularity as a recreational boat in both America and Europe, John endeavored to spread the word about the traditional models for these boats, feeling that the centuries of evolution in life or death conditions tended to produce models for kayak design that were by and large being ignored. He studied the Inuit culture, the boats and the skills needed to survive in them in the most trying conditions. It's seems John became as much an historian of kayaking technique and skills as of the building process. In the 1960's he was able to interview some of the last generation of hunters using their boats in the original manner in Alaska and also travelled to Greenland and interviewed some of the last true seal hunters and measured their kayaks. Exceptional for an historian, John was  equally interested in both the material culture of kayak and the operation of the craft, the skills and techniques needed to safely use and optimally hunt with these boats.
John Heath and Eugene Arima were collaborating on a book at the time of John's death in July of 2003. Recent years had shown a growing interest in traditional kayak due in part to John's efforts and he was gratified to see his lifework begin to have effect on a growing number of kayak enthusiasts.
The book was published in 2004  by the University of Alaska Press. Eastern Arctic Kayaks has become in the few years since it's publication one of the landmark texts in the history, design and technique of kayak. A rich volume, it includes contributions from John Brand, Harvey Golden and Hugh Collings on kayak types from various museums, and, in keeping with John's interest in technique, a chapter by Greg Stamer on Greenland paddle technique and an extensive photo study of Greenland rolling technique and contributions from H. C. Petersen and Johannes Rosing. Instant classic and now one of the must have books for the serious student of Kayak.
In 1959 John Heath commissioned one of the last living indigenous kayak builders, Greenlander Emanuelle Kornielesen to build him an Illorsuit kayak similar to the one built for Ken Taylor (see previous post). The builder was short of skin that year and John's frame was never covered. The frame is now in the care of Greg Stamer, and in 2004 Harvey Golden took off the lines and built a replica.
John produced several kayak technique videos, some with (seven time) Greenland National Kayaking Champion Maligiaq Padilla, and his widow, Jessie, has made them available  here. There is also a short biography and memoriam, here.
Posted by Thomas Armstrong at 1:02 AM

I am intrigued by how different the Greenland and Aleutian style of kayaks are. I love the look of Greenland style boats but suspect the baidarka may be a better sea boat. Then again I have never paddled a baidarka (and I am not crazy about how my Greenland style boat handles in open water.)