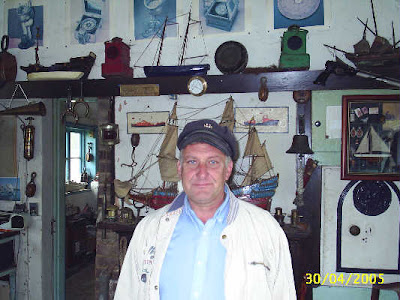 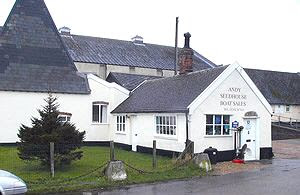 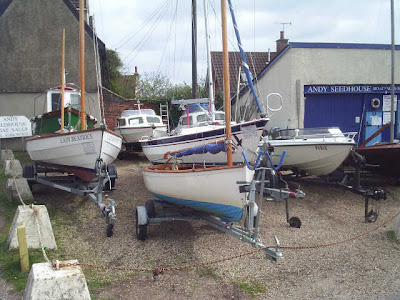 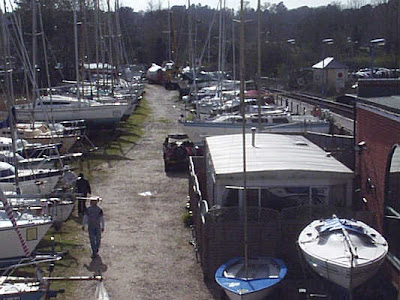 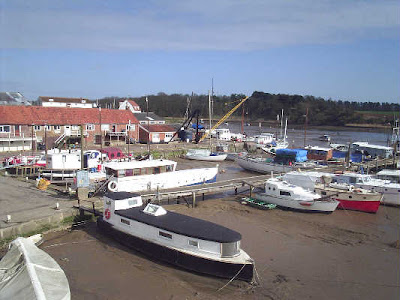 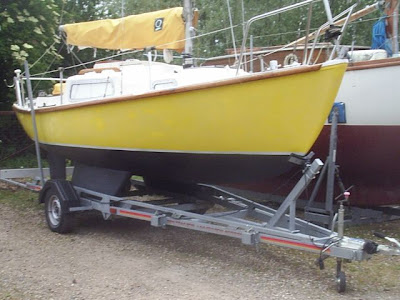 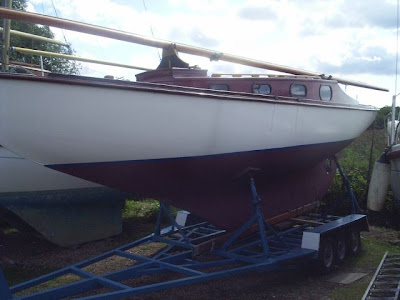 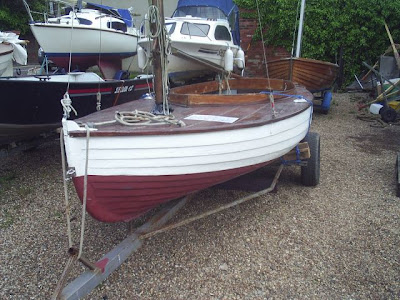 Osprey, Thought to be a Lymington one design 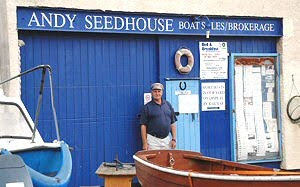 The Chanderly
all photos courtesy Andy Seedhouse
I have never before written about a brokerage/boatyard, and probably won't very often, but this one piqued my interest. I stumbled across this family run business while searching for the little Signet twin keeler designed by American Ray Kaufman. Many were built in Britain. It was a fortuitous find. This is the kind of boatyard I would like to see more of. Built and operated by Andy Seedhouse, it is located in Woodbridge, Suffolk, on the River Deben. On a hunch, I checked the yards proximity to my friend Roger Taylor and found it was within striking distance. Following up on my hunch I asked Roger if he knew of the yard. Paydirt! Not only did he know of it, he had written about it on The Simple Sailor. Here's and excerpt from Roger's article on acquiring a set of sweeps for Mingming:

Quite out of the blue I got lucky. Late one Saturday afternoon I was up in Woodbridge, Suffolk, prior to giving a yacht club talk. With half an hour to kill I wandered around the town's endlessly fascinating waterfront area. I looked at the barges and smacks and projects and oddball craft sunk into their mud berths. I wandered through Everson's yard, chock-a-block with winter lay-ups. I took a stroll down Andy Seedhouse's boulevard of maybe eighty or a hundred small craft for sale - Kestrels and Folkboats and Dauntlesses and anything under twenty-five feet or so you could think of, some sparkling, others quietly expiring under a blanket of mould. I meandered along to Andy's dinghy park and his Aladdin's cave of a second-hand chandlery and there they were. Tucked away up against a wall, mixed in with a load of assorted junk too long or too awkward to fit inside, abandoned, forgotten, redundant, unloved and unwanted, unappreciated and obsolete, were not two but three proper, solid, uncompromising, beautiful sweeps. None of them matched, but it wouldn't take much work to fashion two into an identical pair. They were slightly longer than I wanted. Well, easy enough to shorten them a little. I picked them up. Heavy. Almost certainly ash, but difficult to be sure until I could shave off the patina of grey surface timber and green mould that was starting to form, and examine the grain and colour of the virgin wood that lay patiently beneath.
You can read the entire article here (scroll to Iron Oars). The yard seems to be user friendly, with a very relaxed atmosphere, "all the boats have a full description & price attached to them so you can look in peace anytime - the yards have 24 hour pedestrian access & there is a great cafe on the front doing "fryups". As Roger says, it's filled with interesting smaller boats, from older traditional small craft to liveaboard homes with lots in between, including the largest selection of small family sized cruising sail from the postwar period I have yet found. The chanderly where Roger found his oars is "packed to the gunwales with every conceivable boat fitting, accessory and allied equipment that you can imagine, and all at a fraction of the new price!". The website exudes a kind of warm welcome. I suspect this is the kind of yacht brokerage we'd all like to find around the corner.
Posted by Thomas Armstrong at 9:51 PM

Nice post Tom, I spent a couple of very pleasant, hours wandering around Andy's yard a couple of years ago, great place (as is Woodbridge).

We don't have enough boat yards like Andy's and sadly most of them are up on the east coast (not where I live).