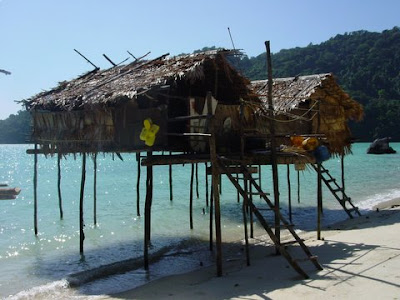 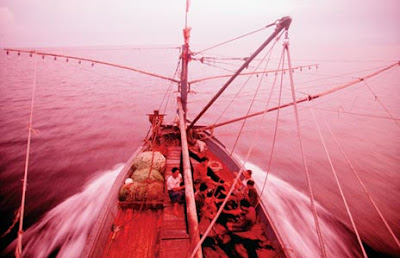 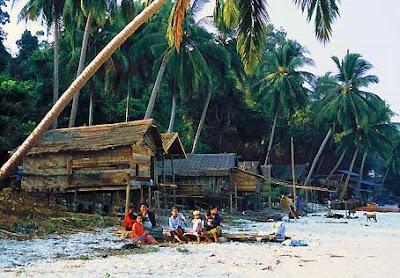 Creed O'Hanlon of The Ethnic Catamaran Company has published a very interesting piece on nomadic lifestyles in general and seasteading on the micro level in particular. It was published in the Griffith Review recently and is currently making an appearance on his blog, A
Tiki in Thailand. Creed had sent me the full text, unpublished, shortly after I first posted about him. I've been mulling it over ever since, because I wanted to give it the right treatment and tie it in with something relevant. It's half rant half academic research and completely compelling. I am posting it with some photo's of the Moken, a semi nomadic group of Thai "seasteaders" as that's the one extant group that I'm aware of pursuing this lifestyle. The Moken or Mogen are not true seasteaders in that they are tied to land based communities about 6 months in the year, but they still embody this ideal more than any group I know of. James Wharram has suggested intentional communities of self builders living on the sea and organised around a mothership. This has yet to occur according to my information.The Moken achieved instant notoriety after the big tsunami in Thailand because, due to their culture and awareness of the sea, they knew the big wave was coming before it hit. National Geographic was all over them, among others. Their lifestyle is of course threatened by the pressure resulting from exposure to modernity and rising fuel prices. Most of their canoes have been converted from sail to fuel.

Creed's article is a must for anyone reading this blog. It tangentially delineates the debate on seasteading and it's possible tracks, corporate or "pirate" ie: small scale or individual approaches. Please read and respond. I'd like to initiate a dialogue on this subject, but I need your input. So I am challenging anyone who reads this blog to weigh in with their views on this subject. If you don't know anything about it, read Creed's work, do some google research, but give this some time and energy.
Posted by Thomas Armstrong at 10:27 PM

Aww, thanks! I think this is a subject close to the hearts of a lot of live-aboards and seafarers. It'll be great to see how people respond here.

btw, I would urge readers of your blog to check out the wonderful Floating Neutrinos at http://www.floatingneutrinos.com/. A practical, cheap, eco-friendly and yes, somewhat hippy-ish (in a post-apocalyptic, Burning Man kind of way) approach to sea-steading... although I still think Wharram catamarans, with their Polynesian-inspired, self-build philosophy, are closer to the ideal.