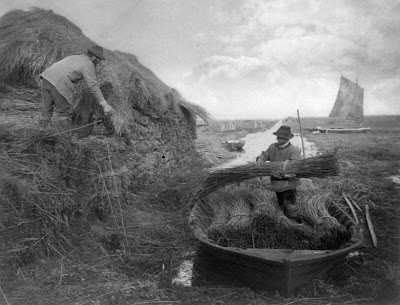 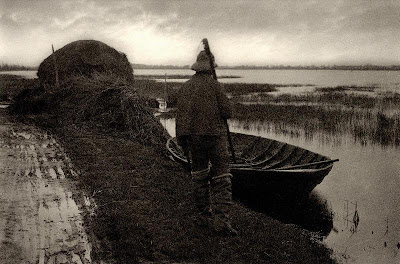 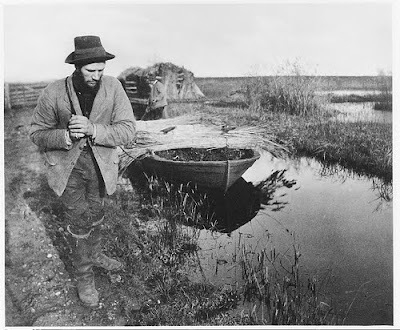 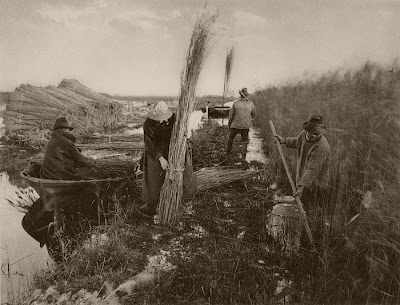 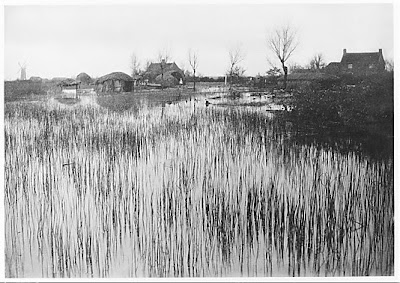 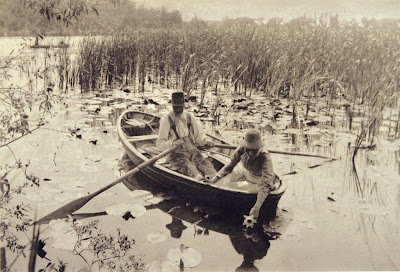 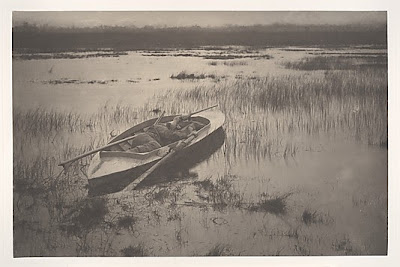 'Gunner Working up to Fowl' 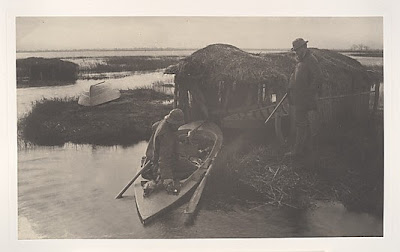 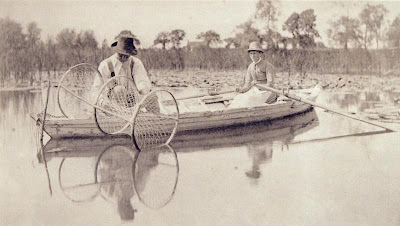 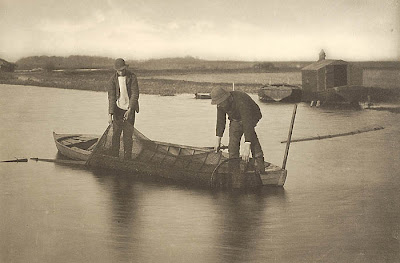 'Taking Up The Eel Net' 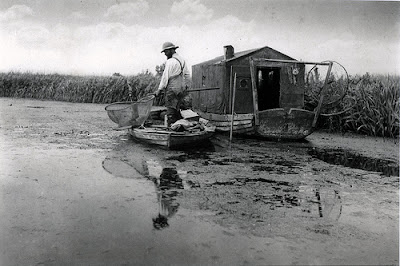 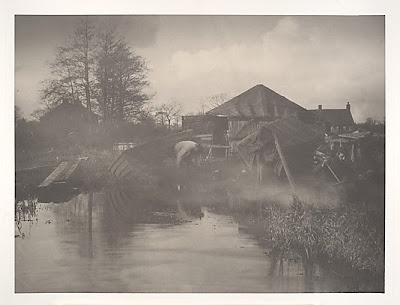 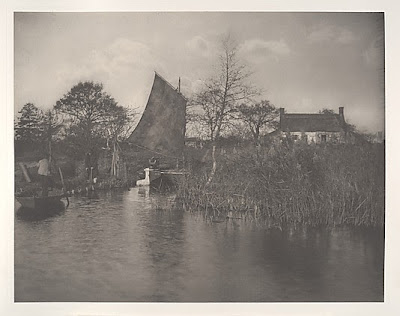 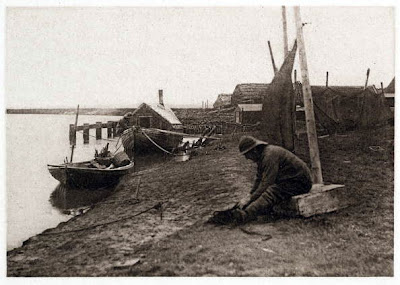 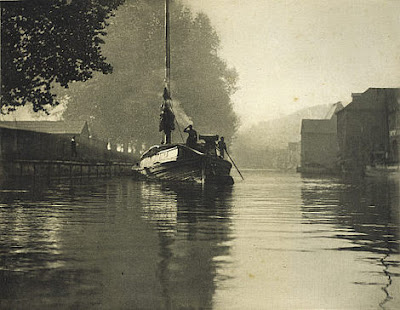 'A Misty Morning at Norwich' 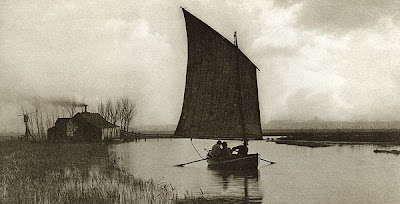 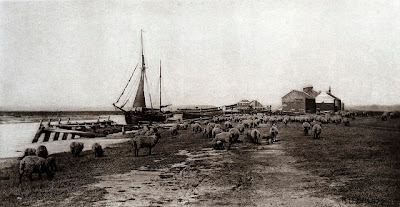 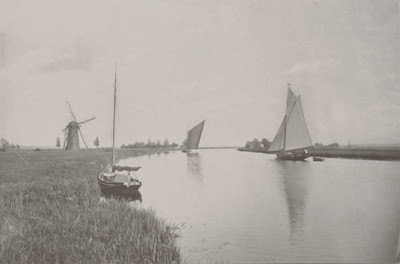 Images may be subject to copyright.

I stumbled across this groundbreaking photographer while researching landscape photography several months ago. After poking around a bit I was quite surprised that I'd never heard anything about him, as he's so highly regarded as a pioneer of photography as an art form. It seems he worked primarily in the Norfolk Broads and East Anglia. His work abounds in scenes of the 'common folk' and work on the water, but is not limited to that, which you might assume from my selections.

I'll defer to Wikipedia for his story:

Peter Henry Emerson (13 May 1856 – 12 May 1936) was a British writer and photographer. His photographs are early examples of promoting photography as an art form. He is known for taking photographs that displayed natural settings and for his disputes with the photographic establishment about the purpose and meaning of photography.

Emerson was born on La Palma Estate, a sugar plantation near Encrucijada, Cuba  belonging to his American father, Henry Ezekiel Emerson and British mother, Jane, née Harris Billing. He was a distant relative of Samuel Morse and Ralph Waldo Emerson. He spent his early years in Cuba on his father's estate. During the American Civil War he spent some time at Wilmington, Delaware, but moved to England in 1869, after the death of his father. He was schooled at Cranleigh School where he was a noted scholar and athlete. He subsequently attended King's College London, before switching to Clare College, Cambridge in 1879 where he earned his medical degree in 1885.
Emerson was intelligent, well-educated and wealthy with a facility for clearly articulating his many strongly held opinions. In 1881 he married Miss Edith Amy Ainsworth and wrote his first book while on his honeymoon. The couple eventually had five children.

He bought his first camera in 1881 or 1882 to be used as a tool on bird-watching trips with his friend, the ornithologist A. T. Evans. In 1885 he was involved in the formation of the Camera Club of London, and the following year he was elected to the Council of the Photographic Society and abandoned his career as a surgeon to become a photographer and writer. As well as his particular attraction to nature he was also interested in billiards, rowing and meteorology.

Initially influenced by naturalistic French painting, he argued for similarly "naturalistic" photography and took photographs in sharp focus to record country life as clearly as possible. His first album of photographs, published in 1886, was entitled Life and Landscape on the Norfolk Broads, and it consisted of 40 platinum prints that were informed by these ideas. Before long, however, he became dissatisfied with rendering everything in sharp focus, considering that the undiscriminating emphasis it gave to all objects was unlike the way the human eye saw the world.

He then experimented with soft focus, but was unhappy with the results that this gave too, experiencing difficulty with accurately recreating the depth and atmosphere which he saw as necessary to capture nature with precision. Despite his misgivings, he took many photographs of landscapes and rural life in the East Anglian fenlands and published seven further books of his photography through the next ten years. In the last two of these volumes, On English Lagoons (1893) and Marsh Leaves (1895), Emerson printed the photographs himself using photogravure, after having bad experiences with commercial printers.

During his life Emerson fought against the British photographic establishment on a number of issues. In 1889 he published a controversial and influential book Naturalistic Photography for Students of the Art, in which he explained his philosophy of art and straightforward photography. The book was described by one writer as "the bombshell dropped at the tea party" because of the case it made that truthful and realistic photographs would replace contrived photography. This was a direct attack on the popular tradition of combining many photographs to produce one image that had been pioneered by O. G. Reijlander and Henry Peach Robinson in the 1850s. Some of Robinson's photographs were of twenty or more separate photographs combined to produce one image. This allowed the production of images that, especially in early days, could not have been produced indoors in low light, and it also made possible the creation of highly dramatic images, often in imitation of allegorical paintings. Emerson denounced this technique as false and claimed that photography should be seen as a genre of its own, not one that seeks to imitate other art forms.

All Emerson's own pictures were taken in a single shot and without retouching, which was another form of manipulation that he strongly disagreed with, calling it "the process by which a good, bad, or indifferent photograph is converted into a bad drawing or painting".
Emerson also believed that the photograph should be a true representation of that which the eye saw. Following contemporary optical theories, he produced photographs with one area of sharp focus while the remainder was unsharp. He vehemently pursued this argument about the nature of seeing and its representation in photography, to the discomfort of the photographic establishment.

Another of Emerson's passionate beliefs was that photography was an art and not a mechanical reproduction. An argument with the establishment ensued on this point as well, but Emerson found that his defence of photography as art failed, and he had to allow that photography was probably a form of mechanical reproduction. The pictures the Robinson school produced may have been "mechanical", but Emerson's may still be considered artistic, since they were not faithful reproductions of a scene but rather having depth as a result of his one-plane-sharp theory. When he lost the argument over the artistic nature of photography, Emerson did not publicise his photographic work but still continued to take photographs.

First published on 70.8% by Thomas Armstrong

Thank you for sharing these lovely photographs with us. I am reminded of a number of things when I look at them. I am reminded of old photographs of Chippewa Indians harvesting rice in their canoes. I am reminded of the eastern shore of San Francisco Bay which is still partly inhabited by salt marshes and in the days of horse drawn transport was a source of hay for the horses of San Francisco. Flat bottomed scows would sail over at high tide and set down on the mud at low tide to be loaded with hay. Afloat again with the next high tide they would return to San Francisco.
And I am reminded of my mother's ancestral home in Bavaria which I recently visited. When I was a child, people were still cutting peat in a bog adjacent to the home. We visited just recently and the peat bog is overgrown with firs and is now a nature preserve. Nobody misses the old life style and the hard labor. Likewise, the descendents of the people in Emerson's photos no longer have to toil in the marshes and are probably setting foot in boats for recreation only. Still, we cannot help but feel nostalgic for a lifestyle that was closer to the earth and the knowledge of the land that has been lost.

A wonderful and insightful comment, Wolfgang. Thanks for it. I especially like the last, which mirrors my own sentiments.

Hello - these pictures caught my eye and how wonderful they are. Briefly I thought they might be of Ireland (where we still cut and burn turf albeit mostly by machine, it still has to be turned and bagged by hand.) Evocative and nostalgic I agree, but there is also a welcome revival of traditional ways, due to recession necessitating thrift, but also general disillusionment with commercial lifestyles and desire to simplify. Thank you for posting these pictures they’ve made my evening. Louise