The Whaleboats dance and parade 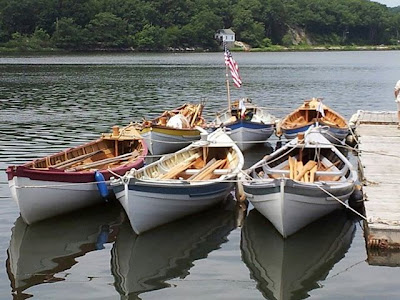 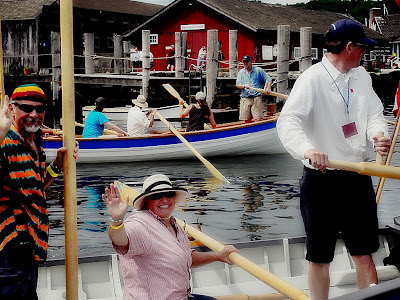 Speaking of the Independence Seaport, here are volunteers John Schwarzenbach and Wen Byar, along with CEO John Brady. 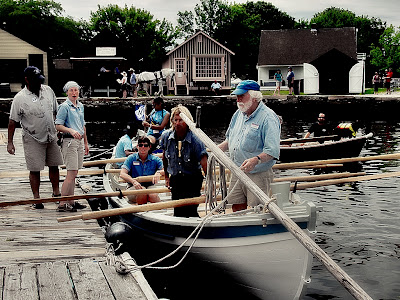 Here's the crew of the Great Lakes boat ready to shove off. 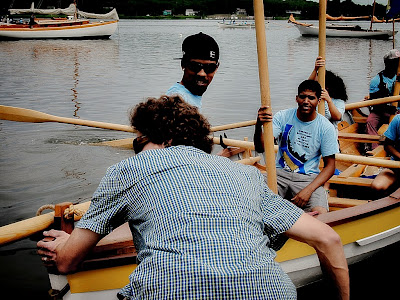 Geoff McKonly, formerly of Rocking the Boat, was lead builder for their whaleboat. Here he's sending his crew off for the whaleboat parade. 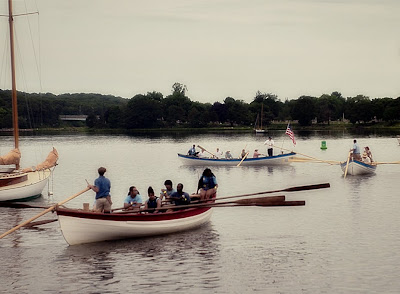 In the foreground, the Apprenticeshop boat joins the two whaleboats from the ISM. 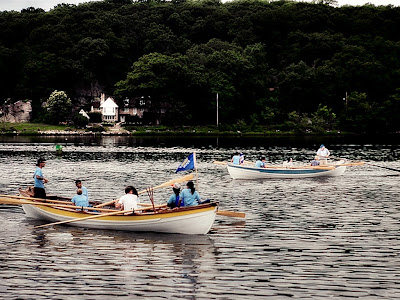 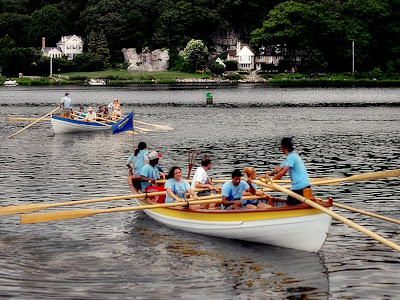 RTB and ISM have a dance. 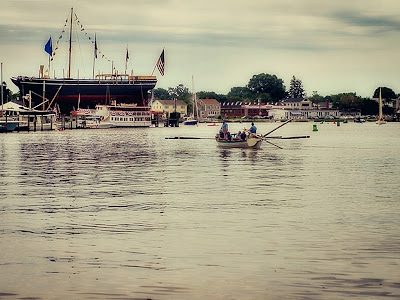 The Mystic boat led the other five in a 'parade' to the 'Morgan' and back. 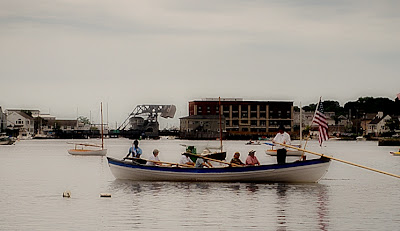 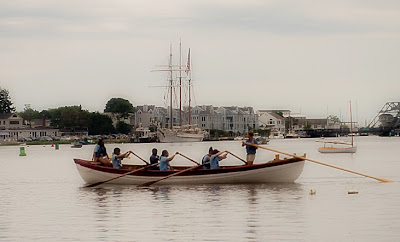 The hardy crew of the Apprenticeshop boat. She was sailed and rowed from Rockland ME to Mystic. 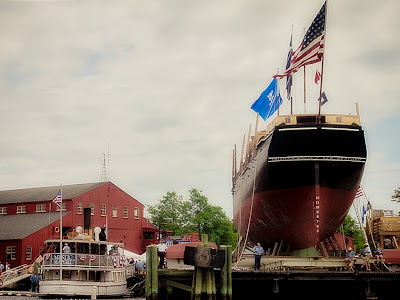 Just prior to the ceremonies I had a sail in the catboat 'Breck Marshall'. Here we see the 'Morgan' and 'Sabino' from the water. 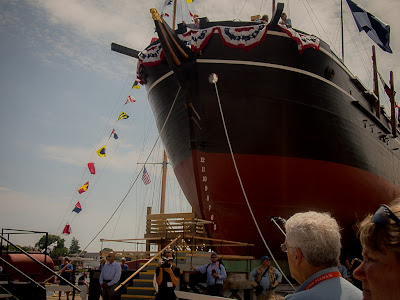 Stage set for the beginning of the proceedings. How massive she is. 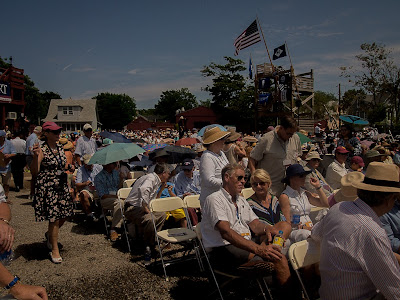 Seated just behind the Morgan are the VIP's, and yes, it was hot! 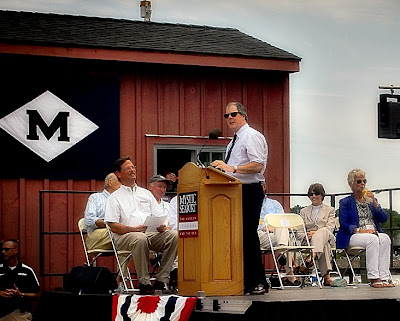 Ric Burns gave the the keynote address, and as I'd expected, it was eloquent and spot on.
To his left is Steve White, President of Mystic Seaport. To the extreme right is Sarah Bullard, a descendant of CW Morgan. 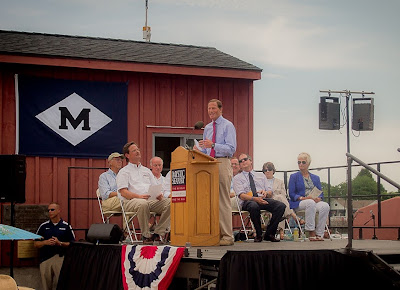 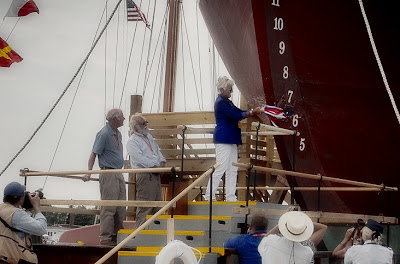 Sarah Bullard 'christens' the launch with a bottle filled with waters collected from the seas the 'Morgan' sailed. 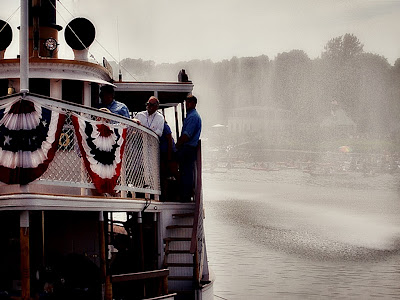 As the 'Morgan' is slowly lowered into the water, a fireship behind the 'Sabino' let go her spouts. 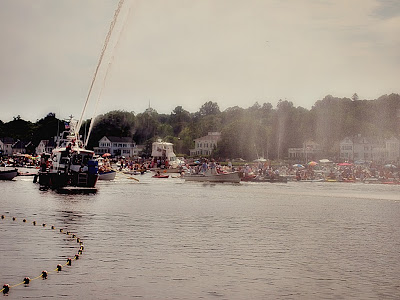 A great crowd on the water 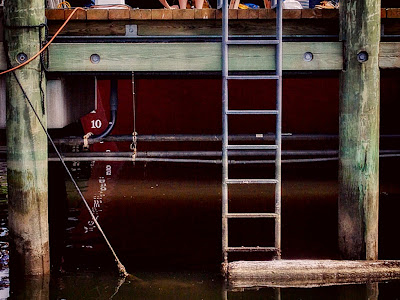 And finally, she is in. 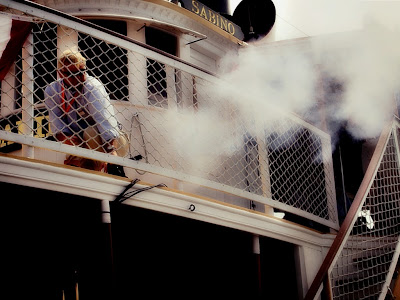 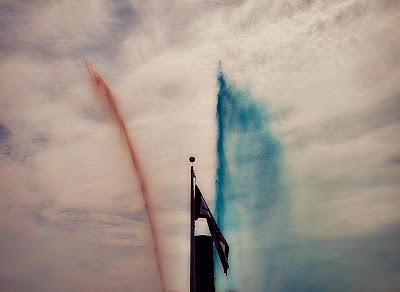 The red white and blue 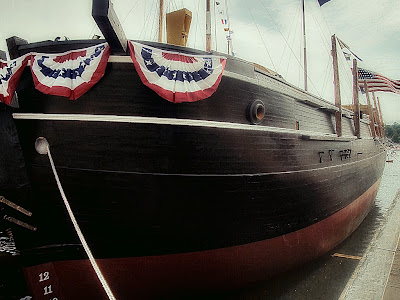 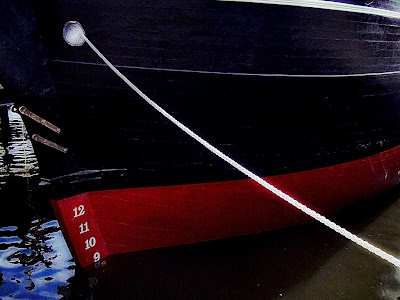 though not quite to her lines. She still has to be rigged and the added weight of spars and masts will bring here down to where she should be. 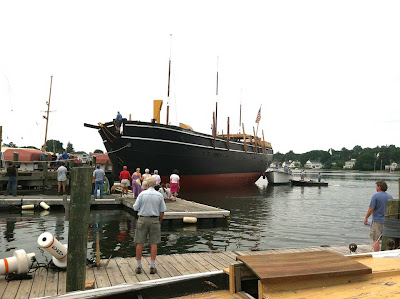 On Monday morning the 'Morgan' was towed a little further out into the Mystic River.


The morning was inauspicious. Raining. But by the time we had breakfasted, things were looking up, no rain and clearing skies, as they say, the 'Morgan' is a lucky boat. I was lucky as well, running into Dan McFadden communications director at Mystic as I entered the Seaport. He directed me to the dock alongside the 'LA Dunton' where the whaleboats were asssembling for a parade to the 'Morgan' and back. I rushed over to find all six of the project boats and a Mystic whaleboat rowing around the river prior to assembling for the parade. Evelyn Ansel was calling the shots and announced the beginning of the parade. I moved over to Australia beach to catch them going by. Later, my companions and I took a short cruise on the catboat 'Breck Marshall' to get a closer look at CW and the watercraft invading the Mystic River for the celebration. Magic.
By the time the ceremonies began it was sunny and a bit hot. The affable Steve White, President of Mystic Seaport, opened the proceedings. Speeches ensued, by dignitaries, all quite good, actually, then a prayer, and then we came to the Keynote address by the superb filmmaker Ric Burns. Ric is a bit of an historian on American whaling and his documentary 'Into the Deep' for PBS is must see for anyone remotely interested in American whaling, or our history in general. His remarks were cogent and perceptive and a coda to the day.
Sarah Bullard christened the 'Morgan'. She is a descendent of Charles W Morgan. The bottle she used to strike the bow was filled water from the North and South Atlantic, the Pacific and Indian Oceans as well as water from New Bedford and Mystic, her original and current homeports with a wee drop of rum added for good luck.
The 38th Voyage:
Beginning in late May of 2014, the 'Morgan' will embark on another voyage. It will be her 38th. She'll first sail south to New London for sail training and seagoing preparations. Upon leaving New London she'll turn upcoast and visit Newport, Vineyard Haven, New Bedford, Provincetown and Boston. The 'Morgan' will then return to Mystic.
According to Dan McFadden at Mystic Seaport, her voyage and subsequent tenure as a exhibit at Mystic revolves around four major themes: The American Sailor as Icon, The influence of different cultures connecting at sea, Whaling as an example of American enterprise and America's changing relationship to the natural world. Dan states "The last is the most significant: whales were hunted almost to extinction. Today America celebrates the whale and works for it's recovery. Where once the 'Charles W Morgan's cargo was oil and bone, today her cargo is knowledge."

It's my fervent hope that that's true. This massive work of preservation and restoration, involving more than five years and millions of dollars, and including the work done at the various institutions building the whaleboats, is a monument to history, and quite valuable as an artifact. But to fulfill her potential, the 'Morgan' must also become a potent symbol for another kind of preservation, that of not only whales and other cetaceans but for all worldwide fishing stocks and sea life, as well as our seas themselves, all of which are in danger.

She is rigged as a bark

She has 70 new ceiling planks

22 States have contributed materials or expertise to the restoration.

As one speaker during the Launch ceremony quipped, It's all been said but not everyone has had a chance to say it...

I would like to thank all those involved in this tremendous project, the staff at Mystic, the shipwrights and volunteers who've brought this ship back to life, all the folks involved in the whaleboat project. Especially, Steve White for his tenacious commitment to see the project through in financially difficult times,  three generations of the Ansel family for their commitment to preserving maritime knowledge and skills, Dan McFadden for his help and generosity and to John Brady for inviting me to be a part of the project. It has been and continues to be a great honor.

Maybe 2015 will see her sail south toward New Jersey and then Philadelphia...

Maritime preservation just made a tremendous leap. Thank you for the coverage... almost like being there!

My cousin told me that the event was splendid and the boats were incredible. Next time there is an event; I would really make time and attend it. I feel so envious of my cousin who was able to attend the event.
- Adirondack-Guide-Boat.com

Delighted to see this. When I visited Mystic some years ago and saw the Morgan, I realised why whalers were so distinctive - and wondered what her fate would be. So glad to learn that she's back on the water and alive again.