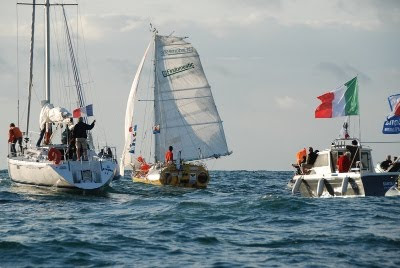 Alessandro was towed into harbor, his engine disabled for the record attempt. 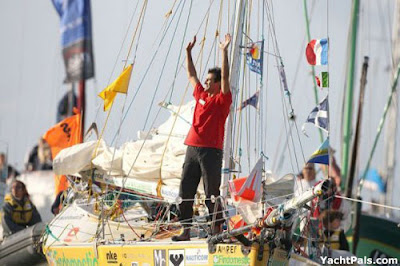 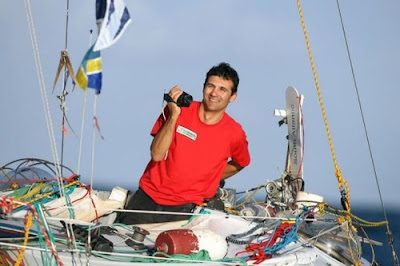 Alessandro looks happy to be home! 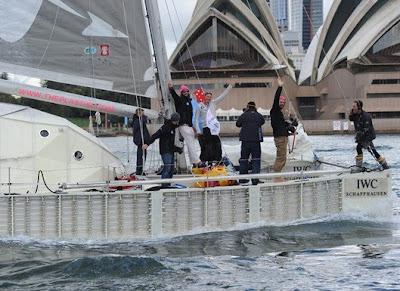 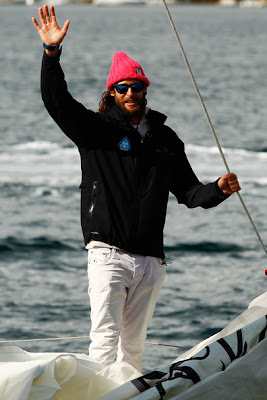 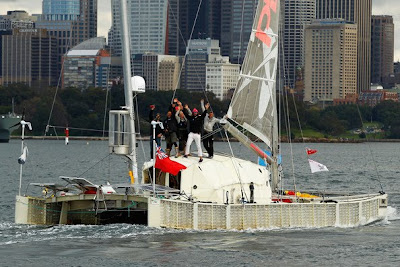 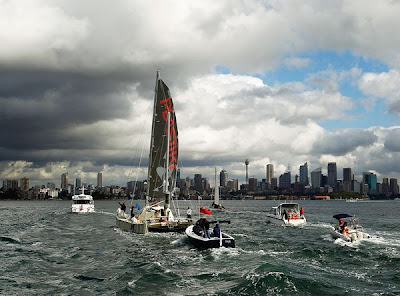 Two arrivals, two goals accomplished. I'd like to congratulate each of these dreamer/doers.

First, Alessandro di Benedetto completed his circumnavigation, smallest boat around nonstop and unassisted, recognized by the powers that be of such things. An impressive, possibly amazing achievement, aboard his Mini 6.50. Dismasted during his initial attempt at Cape Horn, and expected by all watchers to retire, Alessandro persevered, jury rigged, and got on round.
Time taken by Alessandro Di Benedetto to make his trip around the world in the Mini 6.50 sailboat: 268 days 19 hours 36 minutes and 12 seconds. Applaud. He returned to Les Sable d' Olonne to fanfare, with his mom Anne Marie Di Benedetto there on the docks for his arrival. Anne Marie handled much of the logistics for the attempt, and was the email liaison which allowed me, and others, to communicate with Alessandro in the midst of his journey. See my initial post here.
Alessandro made it back to Les Sables on 7/22/2010. My personal congrats to Alessandro and Anne Marie

Brad Hampton of Yacht Pals wrote about the journey, here's an excerpt from after the dismasting:

On April 2, after receiving word from his team, YachtPals reported that Alessandro would have to make for land in Chile. And then a few hours later, we had to retract that statement. Alessandro had notified shore support that he was going to try to jury rig his boat, AND SAIL AROUND CAPE HORN! We double- and triple-checked. Was he serious? Was he crazy? Cape Horn is the nastiest patch of water on the planet, and most sailors wouldn't round it on a perfectly sound boat. Yes, he was serious, and maybe crazy too! But ever-so-slowly, Di Benedetto approached and then rounded Cape Horn, after which he pointed his bow for home.

The final trip across the Atlantic was slow, and held many challenges, but Alessandro crept along, persistently making headway while many YachtPals members watched his progress via his route tracker, fingers crossed for his success. We are now happy to report that Alessandro Di Benedetto has arrived back at his starting point after nearly nine months at sea. Pending WSSRC ratification, he will hold the official world record for a non-stop circumnavigation aboard the smallest boat in history. Bravo Alessandro! When sailors tuck their children into bed at night, they will tell your story, using words like bravery, persistence, and hero.

by Brad Hampton for YachtPals.com

David de Rothschild had a very different dream, and project. He set out to raise awareness of our degredation of the oceans, to see and document the almost mythical swirl of detritus forming an 'island' in the Pacific, and to do this with a boat built almost entirely of recycled material. To sail across the Pacific from the US to Australia. He managed the crossing, despite some harsh weather, and judging from the media attention to his landfall in Sydney, he'll certainly achieve his goal of consciousness raising. Whether it will have any real impact on how we treat our oceans is impossible to judge today, one can only hope. His catamaran, Plastiki, incorporated tens of thousands of plastic bottles built into the hull as structural and flotation elements. The boat has many other environmentally friendly adaptations, to wit, in the words of her creator:

"The Plastiki was nothing if not ambitious. We wanted bicycles that would generate electricity, a hydroponic garden, water stills, vacuum de-salinators, a composting toilet, solar panels, wind turbines, regenerative electric propulsion, satellite communications and pretty much anything else that constituted an innovative sustainable “system”. She was to be a floating showroom of non-emitting futurist ideas that were simple, elegant and wholly attainable."

Plastiki arrived in Sydney harbor on the 26th of July to great fanfare and media attention. Hopefully David will be able to leverage his success into increased awareness and eventual action. It's really nice to see someone who knows how to use wealth, bravo David, we expect to hear more from you.

What a great post! Alesandro and his voyage are truly the stuff of heroes. I also love the voyage of David de Rothschild, mostly because he is an heir to one of the most globally destructive and feared banking houses on the planet, with rumored links to the mythical Illuminati and Reptilians! Gives me hope that even bankers can have a change of heart. Rock on, David.