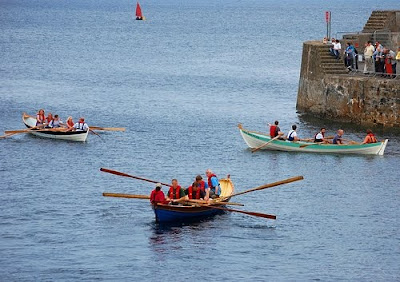 Though not really apparent in this photo, Lass is here pulling ahead of North Berwick's St Baldred 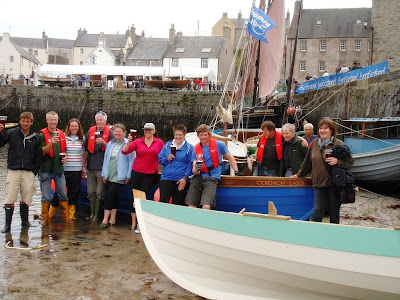 The 'buieites hard at work on their re-hydration scheme 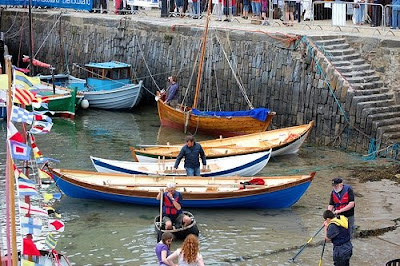 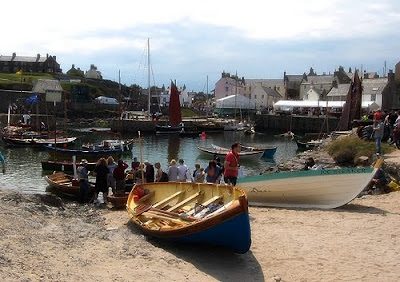 Coigach Lass and Icebreaker hauled out in Portsoy's inner harbour, with a backdrop of what appears to be an enchanting village. Adrian Morgan of Viking Boats with Leslie Muir, author of Coigach Lass. Adrian has stated elsewhere that he is doing penance as a boatbuilder for his years spent as a sailing journalist, but he doesn't appear too penitential here. 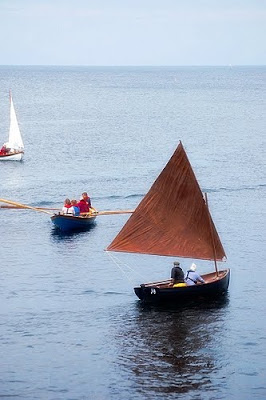 I wrote to Chris Perkin's (see below) to inquire about this rather interesting little boat, and was surprised and delighted with his response:

That's 'Jig', my friend Ken Lowndes, from Polbain, home made dinghy. She is a fibreglass lay-up over an old working boat ( IIRC from an Orkney builder) that was dead on the beach, She isn't the most highly polished of boats, has a long keel so in theory didn't ought to do as well a modern stuff with high aspect foils etc. - but Ken still sails rings round the opposition each Portsoy. The rig is home made as well - a Tyveck paper sail painted with fence paint to give the Tan effect, alu mast with carpet roll bamboo canes as spars.
Ken was in large part responsible for the excellent finish on 'Coigach Lass', painting in very warm conditions in the old Hydroponicum in 'buie - really a giant greenhouse which was great in the winter but once solar gain became significant became a tad tropical.
Have attached a few more of Jig at Portsoy in June for interest. The three mast behind is 'Bien Trouve' a Bantry Bay Gig built for the Atlantic Challenge programme. She took best at show - deservedly. I spent a bit of chip space snapping her. 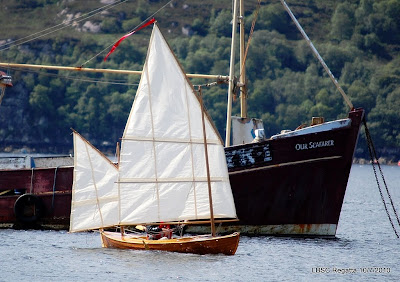 Chris Perkin's lovely Oughtred McGregor sailing canoe Scotch Mist. Chris, a veteran builder of Oughtred designs is an ardent supporter of the Scottish Coastal Rowing Project. He's known around the world to fan's of his weblog,... as strathanchris. Chris is a hydrophobe who rarely sails his own creations, but for all that a very accomplished boatbuilder and a keen observer of the UK mall boating scene. He's responsible for all the photos here and I owe him a deep debt of gratitude. 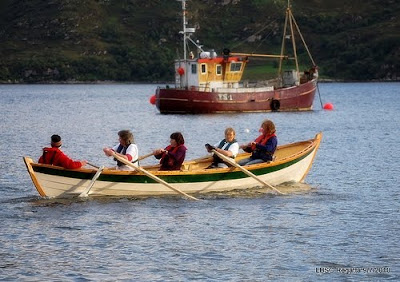 Loch Broom hosted a 'Try the skiff' evening on Friday before the hoopla. Here are some folks trying out Ulla. 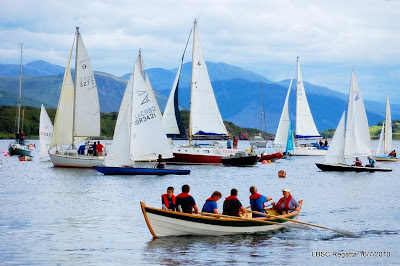 Here, the crew from Coigach give Ulla a try. 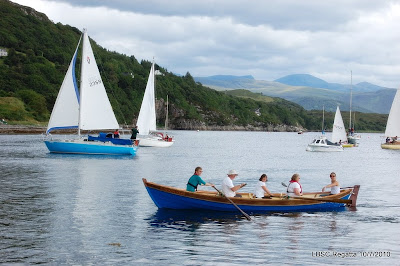 Reciprocated with a turn in the Lass try by Ulla crew. 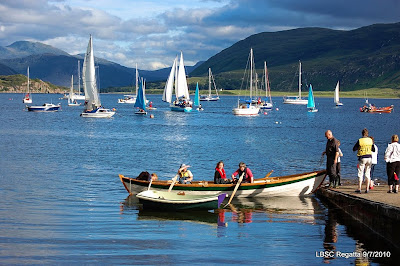 I'd forgotten how majestic Loch Broom can be. Here's Ulla and tender at the boat ramp. 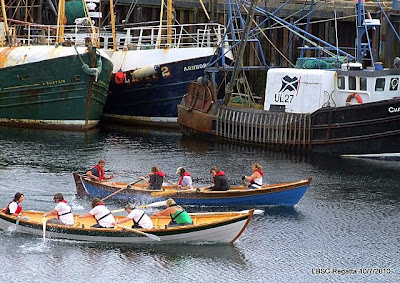 And finally, Lass pulling away from Ulla in one of the races to take the win.


All photos courtesy Chris Perkins, aka strathkanchris, thanks Chris

It seems the crews from my beloved Coigach penninsula are proving hard to beat in the Coastal rowing matches. At least, they've come home with a win both at Portsoy and Loch Broom (Ullapool). Fantastic! I've lost count a little, whether it was the men's crew here, the women's crew there, the mixed crew anywhere. No matter, you can sort it out for yourselves at the Scottish Coastal Rowing Project's website. While their wins are warming to me, what is more warming is seeing how these Scot's communities are embracing the project. It seems the events are rapidly escalating into mini festivals on their own, with great community backing and interest. Of course this is what the organizers of the project were trying to engender, but I'm betting the enthusiasm displayed is a surprise even to them. The project is building momentum. It's a great way to promote community and awareness of traditional boat culture. As I said at the commencement of the project, I think it has global implications for any local culture where boats were a part of the local economy. Witness Jonny Nance in St. Ives, who has completed his second Jumbo replica for racing. Whether taking sail or oar as the paradigm, this is an achievable idea for most communities, though rowing is likely more accessible. Certainly almost all coastal communities worldwide, and many inland communities as well, have traditional boat models which could be revived for such a project, and converted to modern techniques for easier construction, by a competent designer.
While I'm sure these races are hard fought and narrowly won, I think the real message here is not who wins, who loses, but the bigger picture of communities coming together, sharing traditional cultures and knowing each other a bit better for the experience. My ope would be to see this idea snowball globally, engendering a respect for bringing tradition forward by respecting the genius of the past and creating new connections and new traditions.

That said, my real and fervent hope would be that awareness of traditional boats could lead to the possibility of a return to fishing under sail and oar, which could be an immense boon to struggling fish populations by limiting catch without artificial limits being imposed. It may sound whacky, but it's more sustainable, and we desperately need sustainable fishing.

OK that's my rant for the day. Thanks to Chris Perkins and to Leslie Muir, and thanks to all those, each and every one, involved in the Scottish Coastal Rowing Project, and in particular, Iain Oughtred for designing the St. Ayles and Alec Jordan for producing affordable kits.
Posted by Thomas Armstrong at 12:21 AM

Love the rowing!! I am hopeful of some Whaleboat competition next summer.

When we started this project last year, I was sure that the regattas were going to be a great deal of fun. What has happened though is way, way, way beyond what I had ever envisaged when Chris P and I were beavering away building the prototype, or the long winters nights when I worried myself sick as to whether the whole thing was going to catch on and if the first set of builders were going to find that they hated it.

Having organised the first bash at Anstruther in May, then much of the Portsoy regatta, the Portobello do was fantastic for me to be able to enjoy the day, get my son and my American duddy Scott Morris out in the boat, and generally enjoy the wonderful atmosphere as bodies were borrowed from one crew or another as someone was in the loo (the John for US readers) and couldn't make it back in time for the race.

Already we are seeing more quickly organised local events such as this Saturday at Port Seton where three clubs will have a few races then get stuck into the beer and barbie, then the following weekend nearly all the completed boats will be there for the last big regatta of the season.

What have we started? Not sure, but it is going to be a lot of fun finding out over the next few years.

PS - the kits are available in the US and Oz.