Oliver sets out to cross the Channel 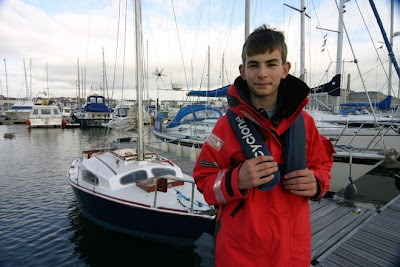 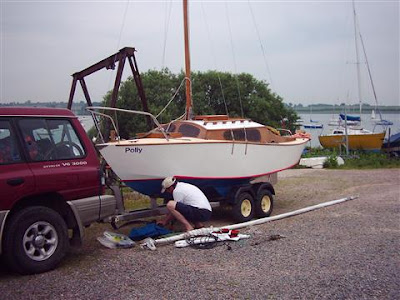 A MkII for sale at Portlooe Marine Services


There's lately been a spate of young sailors setting out in quest of records for the youngest to do this or that, many of them solo circumnavigations. Here's a new entry: 14 year old, Oliver Hancox of Devon, UK, is planning to singlehand across the English Channel in his Silhouette MkII, Cariad. Oli is sailing to raise funds for cancer research after losing his dad to cancer last year. 14 years old. He's getting support from the Mayflower Marina. He is doing this as a fitting way to commemorate his dad, Neil, who was also a sailor and was the first person to cross the Channel windsurfing(!). Take a look, contribute.

Apparently small craft run in the family. The boat is a recently renovated Robert Tucker classic, one of the seminal boats of the postwar period in Britain. The MkII comes in at about 17 1/2', originally in plywood and later in fiberglass, a twin keeler first built in 1959 which has an unusual powderhorn sheer.
Posted by Thomas Armstrong at 9:59 PM

Some of these circumnavigations have caused a great deal of debate.
Good luck to Oliver and his worthy cause.

They certainly have. This trip, though, makes much more sense.

Good luck to him - I hope the weather's kind and the ships find him on their radar!

The thing about these loose footed sails - so rare on standard small craft these days - is that they are so manageable and even better they have so much lift. If you haven't experienced 'lift' in a sail, and it's not sewn into 'normal' Bermudan rigs you may not know what you're missing. It's the same with not using gaff or gunter rigs. So much is invested in that tight leading edge on the Bermudan that it's become rare for most sailors to know the advantage of having a spar at the top of your main and a shorter mast - especially when there are contrary squalls about and you need to get a sail up and down fast.