Mike, Phillipa and Kate, with Jigsaw in the background, all at an' earlier stage of development'. 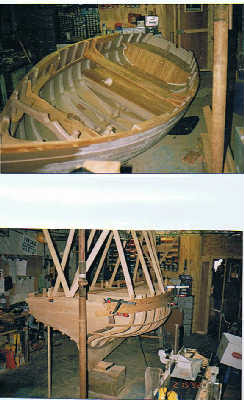 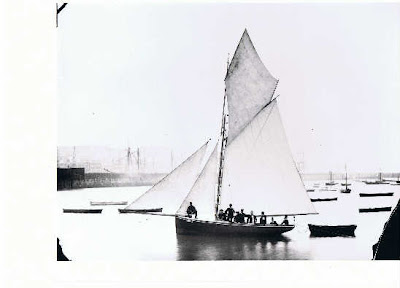 "I learned about traditional Jersey Fishing boats as a child crewing for Bob Kempster, an old Le Rocque fisherman, and also Reg Nicholle, my sailing master at Victoria College. He was an amazing character who used to tell us tales of the La Rocque Boats, racing under "clouds of sail" (photo attached) and how they fished the Ecrehous and Minquiers reefs under sail and oar.
It was by chance that Mike Jackson was restoring the Volunteer for the Jersey Museum when I was looking for a "handy boat" for day sailing and fishing with my young family.

Volunteer would have been built as a sprit cutter and later changed to lug. Different rigs were used according to the type of fishing that the boat was doing. It was not unusual for a boat to have three mast steps."
Posted by Thomas Armstrong at 8:26 PM