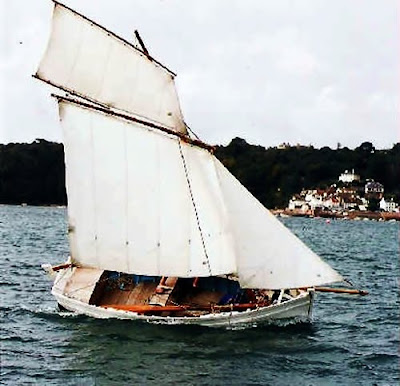 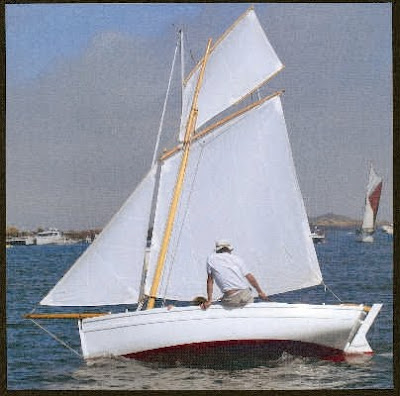 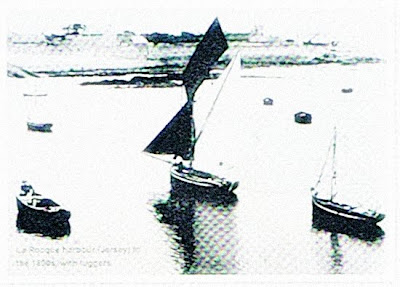 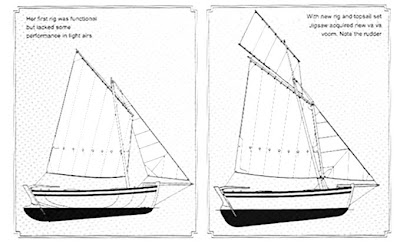 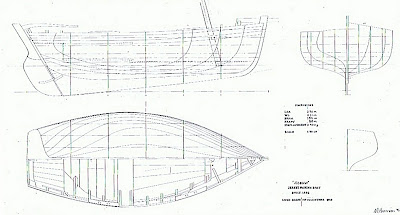 Her hull lines as taken off The Volunteer by Mike Harrison with help from Alan Buchanan, Mike Jackson and Russell Wyness from Jackson's Yacht Services while lying at the quay in St. Aubin on the Gulf of Saint-Malo. 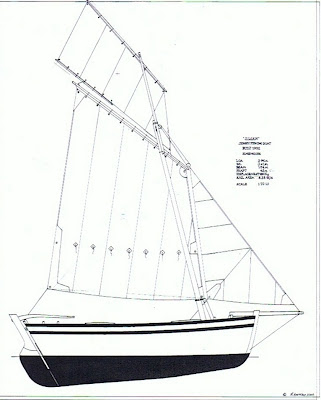 
While researching lug sails I ran across an image of this little gem and was immediately struck by that stunning topsail. I managed to contact her owner Mike Harrison and get some background. Launched in 1992, Jigsaw is a replica of a Jersey Oyster skiff, traditionally built of pine on oak. She was built to lines taken off a Jersey La Rocque spritsail cutter, The Volunteer, built 1889, by Mike and some friends. She's only 13' with a 5' beam and draws 21". The original boats were rigged double masted with a standing lug but Mike opted for a single mast standing lug with a jib forward. Initially he found the boat the boat a bit sluggish in light air, and after much experimentation solved the problem by adding that beautiful topsail, and reports her performance greatly improved.
There is a more detailed article on Jigsaw in the April 2007 issue of Classic Boat magazine. Initial contact with Mike was through the Woodenboat Forum. Much thanks to Mike and his daughter Phillipa for their ready assistance.

I have always maintained that if your going to sail a gaffer, you need a topsail.

I LOVE that topsail. Never seen a lug topsail before. I agree with Ben. There's little prettier than a gaffer with its topsail flying.

Lovely boat, I've been lusting after a topsail for our Cat Boat since I read the Classic Boat articule on Jigsaw!!

That's really is the cutest boat I've seen for days...

I really like the topsail. I have liked them ever since we made the one for ELF and hoisted it. Just completes the boat. Wonder if I can make one for URCHIN.