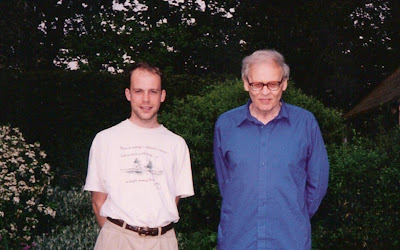 Harvey Golden and JohnBrand on the occasion of Harvey's visit in 1998, photo Stella Brand. 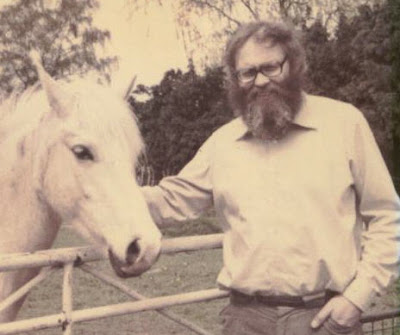 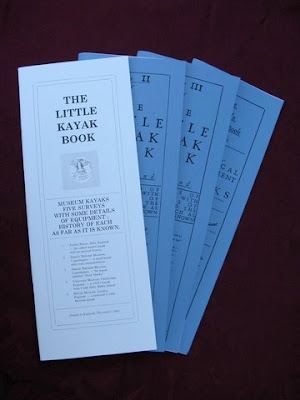 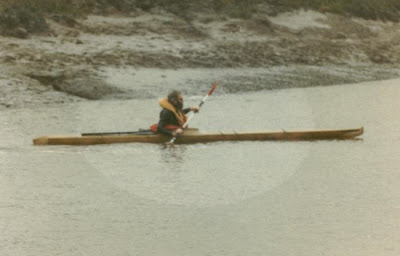 John paddling what he called a semi-replica, early 1980's.  Looks a lot like an Aluet Badairka.  Courtesy the Brand family. 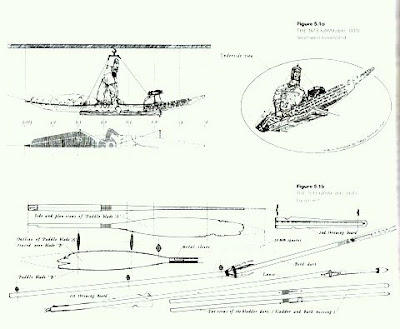 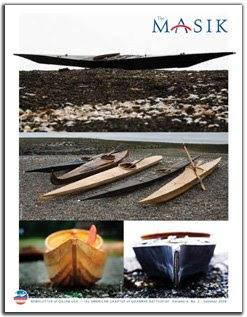 Current Issue of The Masik containing an interview with the Brand family.
John Brand was a pioneer in the modern approach to kayak history in which enthusiasts turn historian, survey kayaks in museum collections around the world, build replicas and learn the paddling skills and techniques associated with the artifact in question. This method is a deep practice of historic preservation, which goes beyond the original object and endeavors to preserve the idea, technology and the surrounding culture radiating beyond dusty, crumbling museum pieces.
John came to traditional kayaks through a natural evolution. Born in Essex in 1931 into a long line of builders, John would make his life in design and architecture. His first boat was a family sized wood and canvas canoe John built from plans by Percy Blandford. He was an avid reader of canoeing magazines and it is here he first discovered the Eskimo craft. In the early sixties John read an article by John Heath which may have been a pivotal moment. He soon began correspondence with John Heath and they developed a lasting friendship. John also began correspondence with other emerging kayak experts, David Zimmerly, Eugene Arima, Wolfgang Brinck, H C Petersen and Hugh Collins, and in later years Harvey Golden. He met Charles Ranshaw who had paddled the Channel in 1947 and they  began working in museums around the UK, taking off lines of museum kayaks. His hobby had become a passion, and John realised he had enormous respect for the efficiency and seaworthiness of these craft and the Inuit culture which had produced them. John began to build kayaks as well, often inside the house and even in the living room. For two decades John amassed material from his surveys, and began in the 80's to try to assemble it into some sort of order. His organizational efforts resulted in the first of a unique series of books called the Little Kayak Book. The book was designed around the long narrow dimensions of a kayak, and is filled with John's inimitable drawings. Long out of print, the Brand family has recently been able to offer the four books in the series in a reprinted edition.
Most of my information has been condensed from a longer interview with John's survivors, wife Stella, daughter Carna and son Russell. The interview, by Tom Milani, editor of The Masik, can be found in the October 2008 issue of that online newsletter at the QajaqUSA website. It has much more information and the voices of John's family.
My association with John was brief but I have never forgotten it. I ordered a copy of the Little Kayak Book in the mid eighties and was delighted not only with the book but also with a warm, personal letter from John which accompanied the book. Regrettably, both are lost. I would like to thank Carna and Tom Milani for their help in assembling this article. And thanks to Harvey Golden for helping the Brands decide to reprint.
postscript: I've added a photo from Harvey Golden of himself and John during a visit to Essex in 1998. Between museum appoinments the two mountain biked and Harvey reports that John was an extremely hardy cyclist, often leaving him "in the dust". Wow.
Posted by Thomas Armstrong at 12:07 AM

I would like to acknowledge the generosity of John Brand. When I had finished the manuscript of my book, The Aleutian Kayak, I sent it to a number of people for comments. I got a handful of comments back from a few people, but John Brand was the only one who read the whole manuscript carefully and offered extensive comments. Over a period of months we had an extensive correspondence and his comments on the manuscript much improved it.