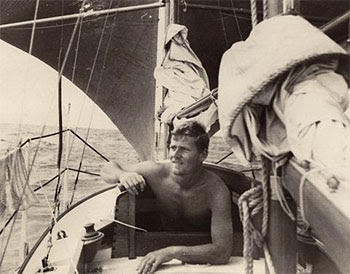 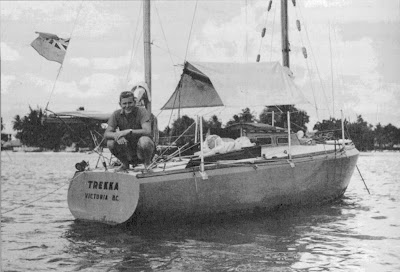 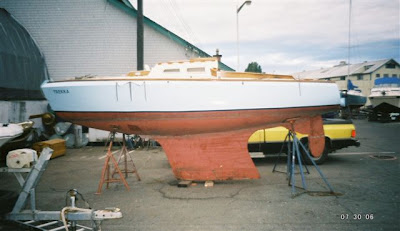 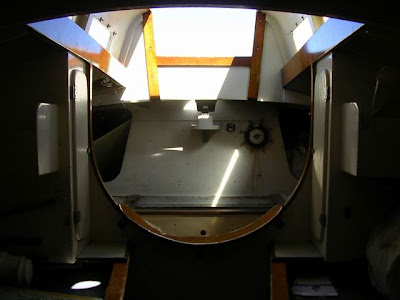 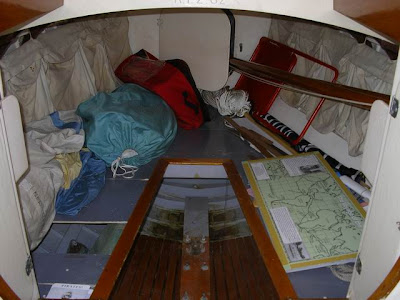 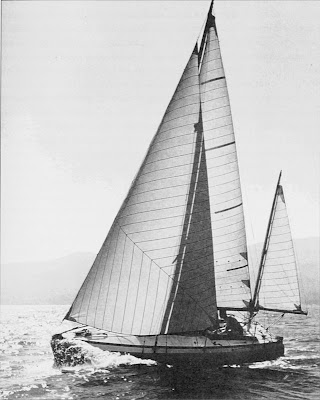 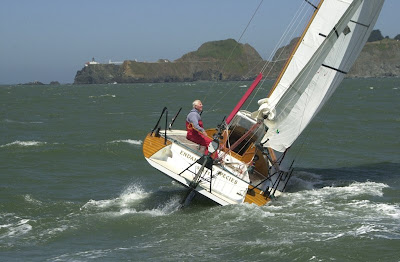 Another J. Laurent Giles design, Trekka, a 20'6" yawl made sailing history in1959 when her owner and builder John Guzzwell returned to her home port in Victoria, British Columbia . Never intending a circumnavigation, John had set out  in 1955, at the tender age of 25, to sail to Hawaii. He had built her in the back of a fish and chips shop and she was his first serious attempt at boatbuilding. One thing leads to another and after four years John returned home in 1959 with the dual records of being the first Brit to circumnavigate and in the smallest boat ever, until Serge Testa broke this record in 1987 in his 12' Acrohc (see my series on microcruising).  It's an incredible story, beginning with John approaching legendary designer Jack Laurent Giles about the a design for a small cruising boat along the lines of Sopranino. Imagine his surprise at Laurent Giles accepting the project and then delivering the detailed drawings for the meagre sum of 50 pounds! John had several adventures along the way, including a nearly disastrous episode with acclaimed cruising sailors Myles and Beryl Smeeton. That story about the pitchpoling, dismasting and near loss of the Smeeton's 46' ketch Tzu Hang (and, very nearly, Beryl) is well told both in the Smeeton's book 'Once Is Enough' and John's own 'Trekka Around The World'.
Upon his return to Victoria  John began in earnest his pursuit of what would become his lifelong career as a professional boatbuilder. His boatbuilding work was interspersed with several voyages over the years. He's built some very large boats, including the three masted 126' schooner Tole Mour, a boat built to provide health care to the Marshall Islands, but still seems to prefer smaller. In 1997 he launched a cold molded 30' racing craft Endangered Species, modeled on the current open 60's of that day, and raced her in the 1998 and 2002 Transpacs.In 1993 he built a slightly enlarged version of Trekka, named Dolly. He currently lives near Poulsbo WA  and teaches boatbuilding at Seattle's Center for Wooden Boats. There is a great interview with him on the Furled Sails site.
John Guzzwell was born to this life. His ancestor were Jersey near the coast of France. At the age of three his family cruised from England to South Africa aboard his father's 52' ketch Our Boy. During WWII Jersey was occupied by the Germans and John and his family spent some of the war in a German interment camp. Repatriated after the war to Jersey. John apprenticed as a joiner for five years and emigrated to British Columbia at age 25 where his sailing adventures really began. There's more information at the sites: The Circumnavigators by Don Holm ,Woodenboat , Transpac98 and John Guzzwell's website. He is truly an icon of minimalist cruising in particular and sailing in general. I'll leave you with a quote,
"So beware, dear reader.  The sea has an enchantment that may captivate you and make you a misfit on land. It is perhaps the last  place on the planet which remains unspoiled, with its moods and behaviors unchanged since time began. Like a moth to the flame, the sea has an attraction that defies explanation and those of us who fall under her spell are forever changed."
Posted by Thomas Armstrong at 6:31 PM

Wondering whether you should rename your blog to Minimalist Cruising – it covers nearly everything you have written about so far!

Interesting how similar the interior of Trekka was to Sopranino too.

I could but I won't. Someone recently described it as a blog about minimalist cruising. But I like having the openess of the title. For instance, there are a few surfing things I'd like to cover.

I have a wonderfully embarrassing story concerning John Guzzwell. Back in my mid twenties (the mid eighties) I worked as an industrial designer for Bayliner, the largest boat builder in the world at the time. My boss had imported a 70' Italian motor yacht for his personal yacht/trophy, and he had the interior gutted and a new one installed more to his taste, and it so happened that he hired John Guzzwell to do the interior joinery! I had NO IDEA who he was, and in the classic hubris of youth working for a big shot company, I had no interest in this man beyond his joinery skills. My God!

It was like, my boss hired Jesus to do a bit of carpentry around the house, and he did a decent job and all, but really nothing special as far as carpentry goes...

The comment above, by Proalife: funny analogy! I can recognize myself in how you feel now. ;) Is it not good that as we become older, generally we become smarter? :D

I realize that these postings are a bit older, but for those interested, check out my Laurent Giles Columbia-Class sloop ("Trekka" sistership) TERN.