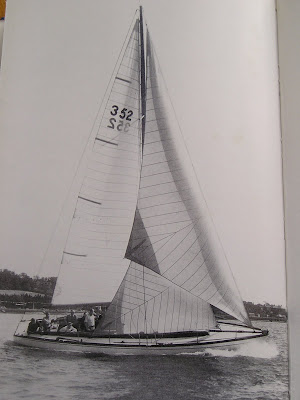 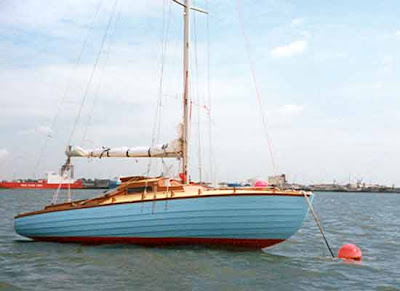 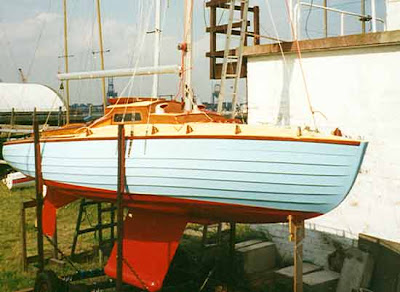 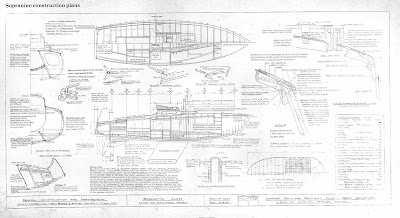 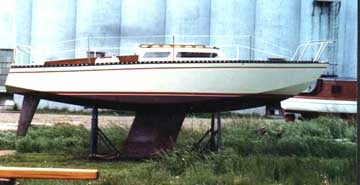 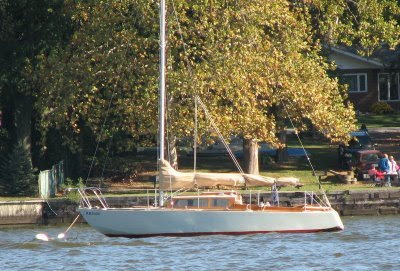 Top: Myth of Malham
Minim, after Sporanino
Minim
Sopranino plans
Thunderbird plans
Thunderbitd  full view
Thunderbird at the apex of the Chesapeake
Question: Did Laurent Giles' Sopranino and Myth of Malham give birth to Ben Seaborn's Sierra and then the Thunderbird? I think it's possible,at least in part. Look closely.  Especially at the drawings.
Steve Bunnell, who wrote about Seaborn in WoodenBoat #148 and the Thunderbird in #149, cites Myth, designed by the revered British designer J. Laurent Giles in collaboration with John Illingworth, as a major influence on Seattle based Seaborn's thinking postwar. New materials and techniques  developed during the war years were to allow new thinking and led to the development of light displacement racing cruising boats, "big  dinghies" with a cabin.
That was also the thinking of Patrick Ellam, sailing out of Brightlingsea, when he approached Laurent Giles to design a craft to criteria he'd arrived at through  experimental voyages in his Theta, essentially a decked over sailing canoe with enough room for two which he sailed across the English channel at least four times.. He was quite surprised at Giles immediate acceptance of the project. The result was Sopranino, a name derived from a musical term for woodwinds indicating a smaller instrument achieving a higher octave ....Sopranino was really small, 19'6, with a bulb keel and reverse sheer and she definitely sounded a higher octave. Huge innovations cooked up by Ellam, Laurent Giles and John Illingworth, who consulted on the plans as drawn by Giles and is credited with being the father of modern ocean racing.  On september 6, 1951 Patrick set out to cross the Atlantic in her , with Colin Mudie, an employee of Laurent Giles and who had actually penned the plans for Sopranino, as crew. Sixteen months and 10,000 miles later they arrived in NY., effectively proving Patrick's theoretical musings. The voyage and experiment also resulted a must read little book, deserving of a niche in modern yacht evolution, appropriately titled Sopranino.
By 1957 Ben Seaborn had absorbed the knowledge of light displacement experiments around the world yachting community and had several such designs under his belt. In that year he received a letter announcing a competition sponsored by the Douglas Fir Plywood Association. To be built in plywood, the design parameters for the competition were that it should be usable both for racing and cruising, it should sleep four, be capable of being built by reasonably skilled amateurs, be powered by an outboard  and outperform other boats in its class! Quite a list for an unfamiliar, new technology.  Initially Seaborn scoffed at this "challenge", as did most other designers receiving the notice letter.  Eventually, however, he took the bait and  consulted Ed Hoppen, a local boatbuilder intrigued with plywood construction. Their collaboration began and the result was the Thunderbird,which evolved from a previous design, the Sierra, a two person cruising boat. Needless to say the T'bird won the competition, and when completed surpassed all expectations in cruising ability, racing prowess and building techniques. Today a  universally applauded design, Seaborn and Hoppen had hit upon a building method in which the molds became permanent bulkheads. Seaborn himself was awed by his creation, never expecting the stability and speed he'd found in this  hard chine design. And she is accessible to the home builder. She was a hit. The class association reports that this is his most built design, with over1200 some odd registered boats. Plans are available for $50. from the Class Association! Reportedly this is a very fast racing yacht. Their PHRC rating has continued to move into more difficult ranges  over the years and they have been known to sail upwind with their spinnaker set and survive  60 to 70 mph winds, winning races when others had to retire. A Japanese woman cruised one across the Pacific, east to west, an inexperienced sailor sailed one from Puget Sound to Hawaii, one owner has made several voyages to Alaska. Typically, this Ben Seaborn design,like many of his  boats, has a very low windage cabin top and still manages to have an astounding amount of light in the interior.

Sadly, neither of these designers is still with us. Jack Laurent Giles was laid to rest in1969 and tragically, Ben Seaborn took his own life in January of 1960 at the age of 45, in part it's believed, because he felt himself a failure as a yacht designer. Jack passed away in 1969 after a long and successful career and his legacy lives on in his designs and in the design firm which bears his name. Ben's untimely death cut short a career which had already achieved greatness.
Both of these men were instrumental in planting the seeds which  have born much fruit in the evoluition of yacht design and ultimately leading to the light displacement racing yachts of today, from the exquisite little Mini Transat 650's to the "Open' series of maxi yachts which dominate transatlantic and around the world racing. They also had a hand in enabling small boat cruising sailors such as Roger Taylor and many others to trust  a light displacement boat to carry them safely across large oceans. All small boat sailors contemplating or making lengthy cruises owe them a debt of gratitude.
I have recently been very taken with the Thunderbird, for her speed, her seaworthiness , cruising ability and history. Found one, too, if I can figure out how to get her here.  I enquired on the junk rig yahoo goup about the feasability of rigging her junk and Arne Kverneland replied that she's an excellent candidate, but would suffer a slight loss of performance. OK!. Anyone who would like to help me get this boat from Rhode Island to PA, either by land or sea, write to me.
Posted by Thomas Armstrong at 12:04 AM

You're recent interest in the T bird hits home, because around here (Seattle) T birds are a dime a dozen, and I always just sorta took them for granted. Kinda like the girl next door who is never appreciated until an outsider takes an interest... :-)

I have to agree with Proafile. Great description as the "girl next door!" You see these fine boats all over Puget Sound so they never stand out. They are part of the seascape. Seattle and vicinity has had a bad case of forty foot-itis. If it ain't big it ain't worth sailing on it seems. What modern sailing couple could survive a weekend trip to Eagle Harbor on less that 42'! All you need to do is look at the revitalization of Shilshole Marina, Port of Seattle's main recreational facility to see that this is true. Small slips are out. Strangely I've never sailed on a T-Bird though I've had the opportunity to sail on other fine Seaborn design's. I'm surprised to hear that he took his own life because he saw himself as a failure. Some of his designs are heart stoppingly gorgeous. As for transporting a T-Bird can't you just unbolt the keel and yhen load the keel and hull and all onto a car carrier trailer like those available from Uhaul? I think it's been done.

Mr. Anonymous, Michael, thanks for the comments and the suggestion. I'll look into it!

I think Ben had a number of personal problems. One of my own former clients was also a client of Ben's and he said that towards the end he was keeping a very close eye on Ben. But it didn't help. Ben was years ahead of the competition.