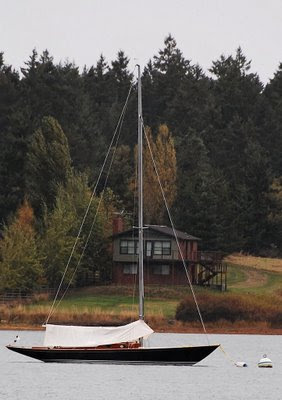 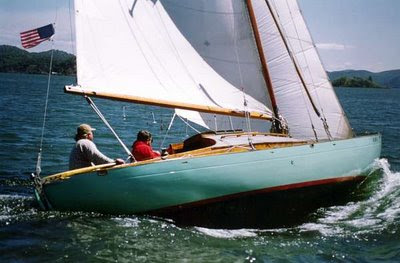 Bill Evans has a beautiful boat and a equally pretty weblog about her and other boats named Knockabout Sloops. He has restored his Sparkman and Stephens Sheilds One Design with a lot of help from Tim Lackey of Lackey Sailing .Built in the mid 60's, this boat harkens back to the golden era of racing yacht design in the early 20th. Century.  Bolero is 30+  LOD and was designed by Olin Stephans, with the original concept coming from Cornelius Sheilds in 1965. Bill has added a cuddy cabin to make more extended cruising possible. The lower picture is of an equally elegant boat on Bill's site, perhaps one of my all time favorite designs, and one that impressed Uffa Fox as well, the elegant and graceful Tumlaren Annalisa, designed by Knud Reimers and owned by one Larry Pardy, pre Seraffyn. You'll enjoy this site. And do not miss Bill's rant on sailing without engine.
Posted by Thomas Armstrong at 11:50 PM

Thanks for featuring my blog, Knockabout Sloops. I would like to add one clarification to your story. That is that Tim Lackey is completely responsible for the renovation of my Shields, Bolero. For my part, I came up with the idea and concept and provided the courage and financial resources to pursue this unusual path.

Tim and I spent a year developing a shared vision that is Bolero. Without Tim it just wouldn't exist.

Years ago, I was slow to act on an opportunity to buy a beautifully built, timber Tumlare, one of the few in Australia. I've always regretted it.