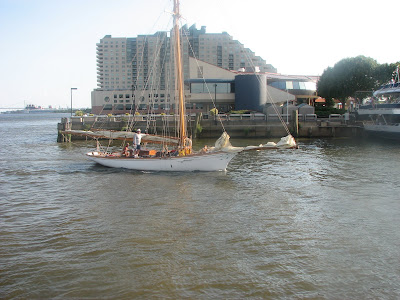 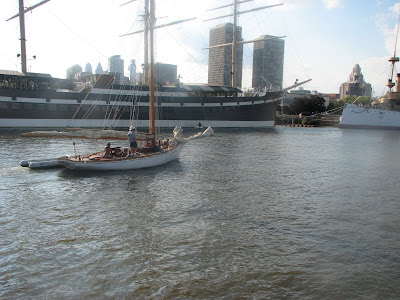 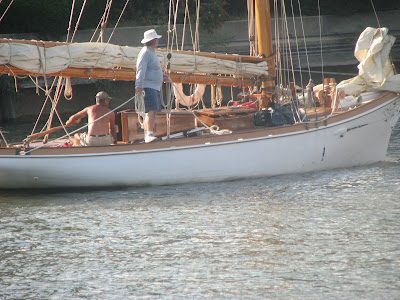 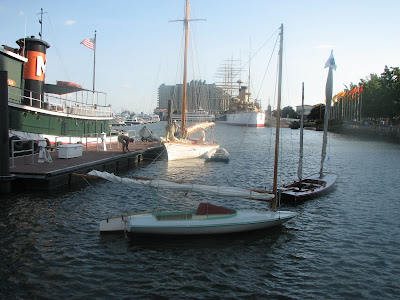 Historic yacht Elf is back in Philadelphia for some rigging work at the Workshop on the Water. Setting up the topsail and rigging it, also finishing the reefing details so all reefing can be done from the deck without crawling the ratlines. Rick said he didn't want to go out there in a blow and I said I didn't either. Crewing with Rick on the drive up from Annapolis was schooner racer Paul Gray out of Doylestown, PA. Paul has an interesting boat. Built in fiberglass, the hull was built to lines taken the Friendship Sloop Dictator. Built by Jarvis Newman of Southwest Harbor, Me., His was the exception, the original owner had her rigged as a schooner. Still is.

So Paul has the distinction, possibly, of owning the only schooner rigged friendship (hull) in the world. He'll be competing in the The Great Chesapeake Bay Schooner Race (again) and Rick Carrion will be among the crew. I was regaled with stories of their past exploits in this race, apparently they've done quite well.
I'll be checking in with Rick this week to see how the work is progressing and give an update. I've been invited to crew with him for the fall campaign, racing and going to shows, so there will be more to come.

Posted by Thomas Armstrong at 11:04 PM