The Gannon and Benjamin whaleboat surfaced alongside the small boat docks. 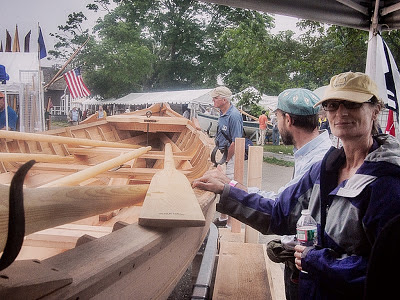 Michelle is my liaison at Beetle and she has been great, responsive and on top of her game.

Center and right are apprentices Simon Jack and Dan Creishar, crew on the boat on it's sail to Mystic

Skipper on the Apprenticeshop's sail and oar cruise from Rockland ME to Mystic, Brian McCarthy 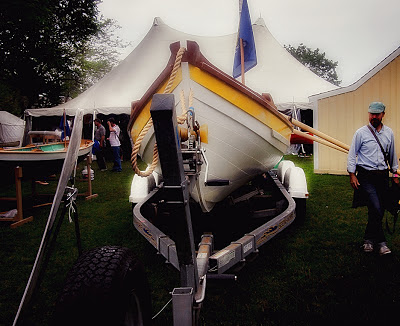 Here Walt is warming up before the demo. Onlookers are l to r, John Armstrong, Bruce McKenzie, lead boatbuilder for the ISM and John Swarzenbach, longtime volunteer at the Workshop on the water.
Caulking tools and supplies brought by the Ansels
Evelyn and Walt discuss the fine points of caulking mallets.

Walt and Evelyn work in unison to show how the larger seams on larger boat/ships were caulked with oakum. Evelyn holds the axelike horsing iron while Walt swings the beetle, a bigger, heavier mallet.

photos and captions copyright Thomas Armstrong
It was another exhilarating year at the WoodenBoat show.Six of the ten whaleboat project boats were on view, those built by The Apprenticeshop, which boat, so in the spirit of Lance Lee, was brought to Mystic by apprentices, rowing sailing and occasionally being towed, Beetle Boat Shop, Gannon and Benjamin Marine Railway, Great Lakes Boat Building School, Independence Seaport Museum's Workshop on the Water and Rocking the Boat. Seeing so many of the whaleboats up close, that I'd only seen virtually before was a huge treat. I really can't fault any of the boats, they all exhibit a high degree of craftsmanship. Five of the six were in pristine condition, the exception being the Apprenticeshop's boat, which bore the signs of it's rite of passage, being rowed and sailed to the event. Patina, let's call it. It was nice to see some wear on the boat, and illuminating, as to how quickly it accrued. The originals were built with the expectation of lasting for a whaleship cruise, average three years, and then replaced.
Also compelling was a skills demonstration by Walter and Evelyn Ansel, respectively son and grandaughter of Willits Ansel, buider of several whaleboats at Mystic and author of 'The Whaleboat' an out of print Mystic Seaport publication which is the bible of whaleboat building and lore. It's around on Amazon, etc. and there are rumors of a reissue by Mystic.
Walt and Evelyn showed us caulking skills, both for small and large vessels, cotton and oakum. Fascinating and complex, and indeed an intersection of science and art, as are many traditional boatbuilding skills. I was transfixed, hadn't expected to be by such a mundane sounding topic. Suffice it to say, Mystic Seaport and other Maritime institutions are repositories of skill and knowledge that would otherwise be lost, and may be, in the not so distant future, called upon to reinvent our way of life. Let's support that. It's interesting to note that according to the Ansels, caulkers, in the past, were intenerent, moving from project to project, and much in demand. A very highly appreciated skill, ie: craftsmen. The Ansels also appear to me to be a modern day equivalent. Highly skilled and highly knowledgable, communicative and sharing. BTW, Evelyn will soon depart for the Vasa Museum in Stockholm on a year of research, on tools I believe, via a Fulbright.

Posted by Thomas Armstrong at 12:19 AM

Don't you want to build one of those whaleboats? I think they'd be a blast to sail. I also loved G&B's lapstrake dinghy.