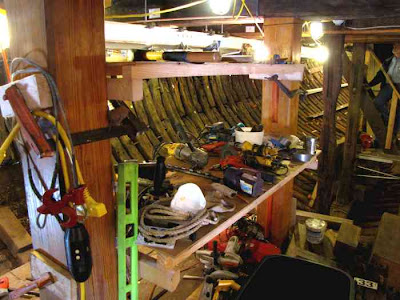 Here is a work bench the shipwrights have set up. 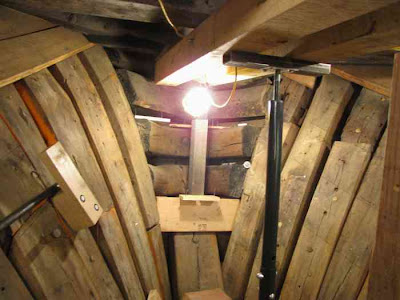 I poked around in the stern and found the construction interesting.
It looks like three knees are laid horizontally to tie the stern together. This part of the ship was restored several years ago so it needs no further attention now. 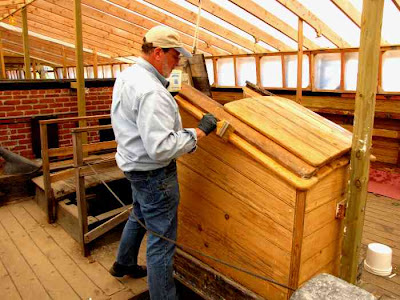 Meanwhile on deck we are appling two coats of 1/2 turpentine and 1/2 linseed oil. The next step is a white primer. 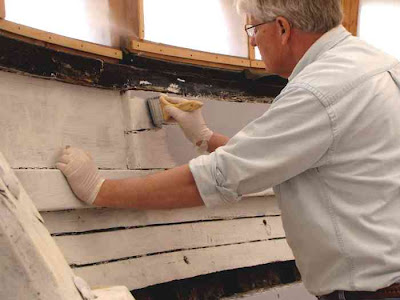 We did a little painting last week. After two coats of a mix of raw linseed oil and turpentine the next coat was white primer. The fourth coat is a primer tinted with Grey. The final beige color looks better over a darker primer. 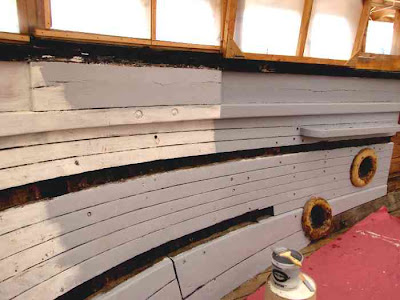 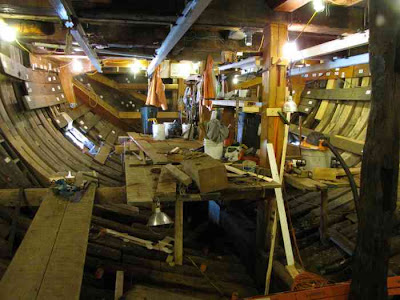 Below decks the framing is coming along.
You can see the progress here on both port and starboard side with the temporary work bench in the center. 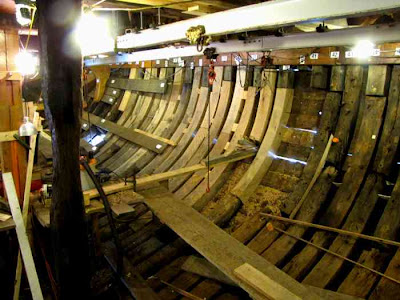 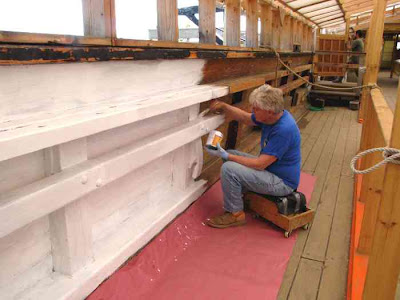 My job is scraping paint and now it has evolved into painting where I helped take it off. 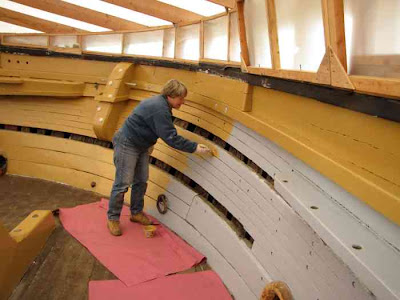 Meanwhile we paint and pretty soon we will begin scraping again. 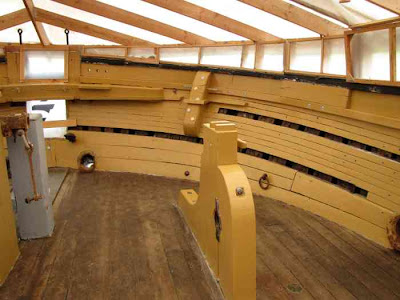 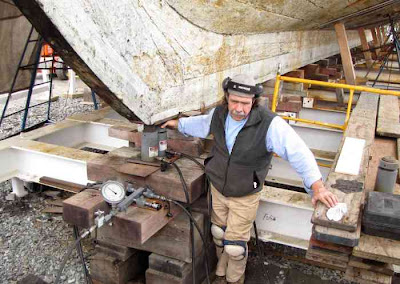 The hogging is almost entirely gone now. After a year and a half of jacking the job is done.

This is the head shipwright at the Henry B. duPont Preservation Shipyard. He is removing the last of the hydraulic jacks used to raise the stem. 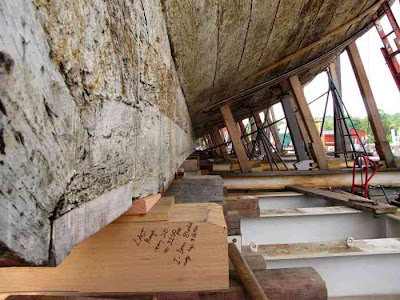 Yesterday I found this note 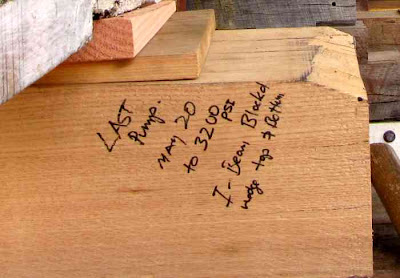 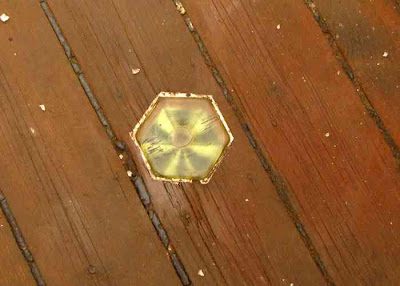 I have been coming to Mystic since about 1948. As a kid and as an adult I remember seeing the top of the prisms on the Morgans deck. In all those years of walking through the lower deck I never once looked up to see the bottom side of what I call "An Early American 100 Watter."

Here is a picture of the deck side. 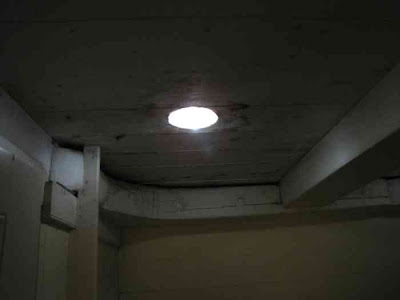 I was amazed how much light actually got through. Remember, the deck is covered with shrink wrap during the restoration and that day was not particularly sunny. 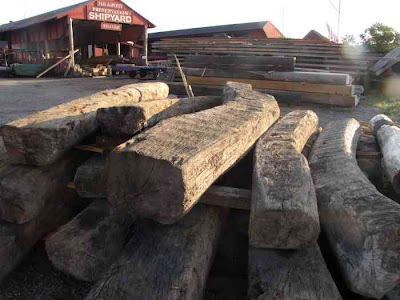 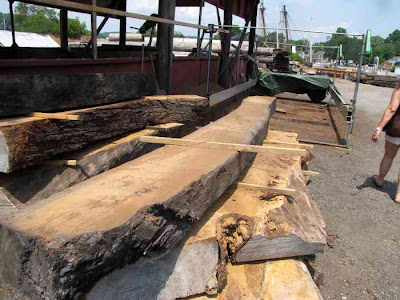 They appear to be precut as futtocks. It's my guess that they date to the time of the civil war or earlier. Ring dating has been mentioned.
After 150 years buried in the dirt the wood still looks like it was cut down yesterday. 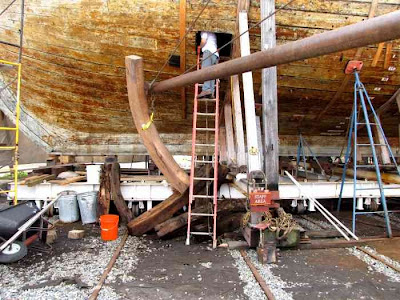 Things are moving along. 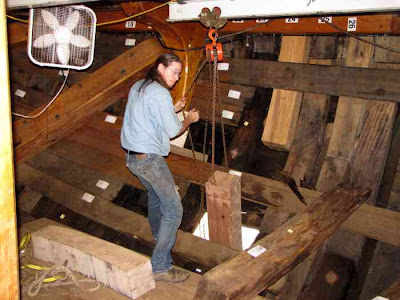 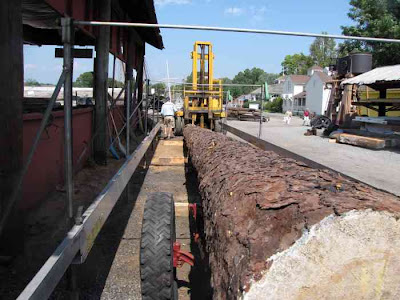 The crew set up the saw to cut a "Deck Clamp" from this piece of long leaf yellow pine. The piece was so long the guys had to use a hand held chainsaw to get through the length of it.
I copied the info below from this source.
http://www.navyboardmodels.com/page.php?74
On a typical ship the deck clamp is a thick horizontal plank that supports the ends of the deck beams. It also serves the very important purpose of securing all the frames, making them immovable. It runs close under each deck along the ship's side from stem to stern.
Here is the raw material.
It will be cut about 4 or 5 inches thick and I don't have a clue as to how long it is. 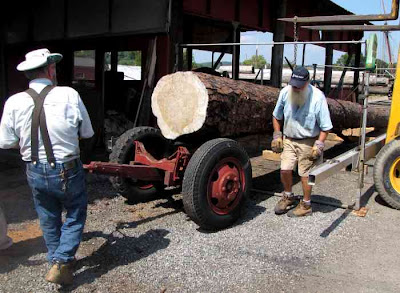 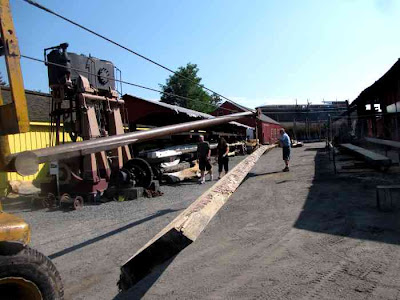 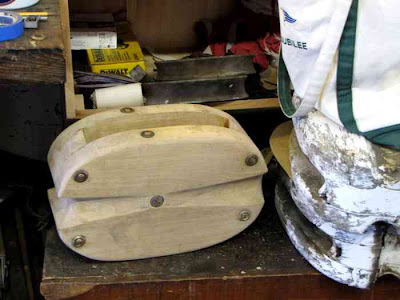 This is a new blubber block. Used to haul the blubber aboard, it is the largest set of blocks on board. The older blocks are to the right. They are probably not original to 1841 but were on the ship when Mystic acquired her in 1941. 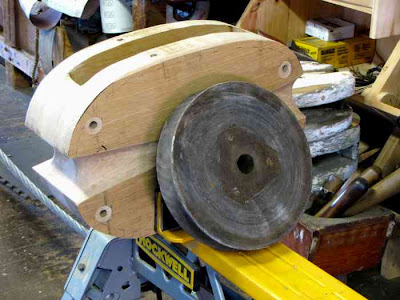 The original lignum vitae sheaves will be used. They are in perfect condition. 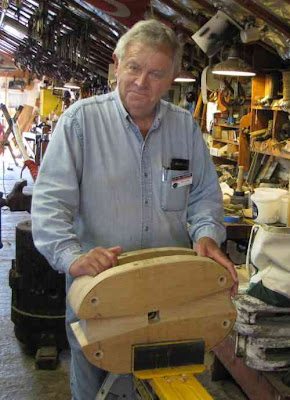 This is the volunteer who is building them. He is also building all the other new blocks Morgan will need when she starts her 38th voyage in 2013.

All photos and captions courtesy Carl Swebilius , Mystic Seaport and the WoodenBoat Forum

Part two of this series:

Carl continues in his volunteer work and his posts to the thread. His work following the restoration, taken on apart from his volunteer work, is a labor of love, obviously and a great resource for us, and for Mystic Seaport. The Morgan is apparently on schedule for splash in 2012 and first cruise, to New Bedford, MA in 2013.

'I'm a big fan of the WoodenBoat Forum. I almost exclusively follow the design forum, but recently thought I should take a look at the at the building forum and was rewarded by finding there a huge thread on the restoration of the Charles W Morgan, the last remaining wooden whaleboat in the world. The thread is posted by a volunteer, Carl Swebilius, who works at Mystic Seaport one day a week and follows the work being done on the Morgan as well as branching off into many other stories about Mystic. It's a casual read, but also hugely informative and entertaining. Well worth a look.

Here's what Mystic Seaport say's about the Morgan:

Her longest voyage was four years and 11 months, while her shortest was 'only' eight and a half months.

The Charles W. Morgan is the last surviving wooden whaling ship from the great days of sail. Built in 1841 in New Bedford, MA, the Morgan had a successful 80-year whaling career. She made 37 voyages before retiring in 1921, and was preserved as an exhibit through the efforts of a number of dedicated citizens. After being on display in South Dartmouth, MA, until 1941, she came to Mystic Seaport, where each year thousands of visitors walk her decks and hear the fascinating story of her career as a whaling vessel, historic exhibit, film and media star, and a porthole into America's rich history."

The Charles W. Morgan slid out of Jethro and Zachariah Hillman's shipyard in New Bedford, MA, on July 21, 1841.

She took 7 months to construct with 31 men working on her.

Her main truck was 110 feet above the deck.

She carried 4 whale boats (later a fifth was added).

The Morgan typically carried a crew of 30 to 36 men.

Her cruising speeds could reach over 9 knots.

Nat Arata, VP of Development at Mystic, and my liaison for this project, along with Carl Swebilius, the volunteer who is telling the story, sent this answer to my query about what the costs from 1841 equated to in current dollars, just for some perspective. The question was answered by another VP at Mystic, Paul J. O'Pecko, Vice President, Collections and Research Director, G.W. Blunt White Library,Mystic Seaport:

I visited the Morgan this summer during the WoodenBoat Show this summer and have to say she is the imposing presence on the Seaport's waterfront. Out of the water as she is, the word that comes to mind is massive. Definitely worth the trip.

Editors note. I am endeavoring to keep the flavor of Carl's posts to this thread by not editing his captions. Note that I have not, by any means, used all of his work. It's all there on the thread.
This is just the second of three posts on this voluminous thread, One more to come...'

Posted by Thomas Armstrong at 11:45 PM

really enjoyed reading this Tom, thanks so much for sharing it. Wow, what an amazing ship.