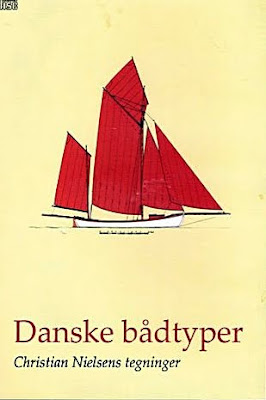 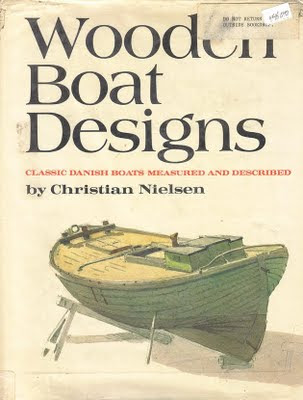 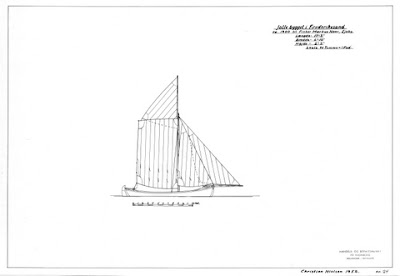 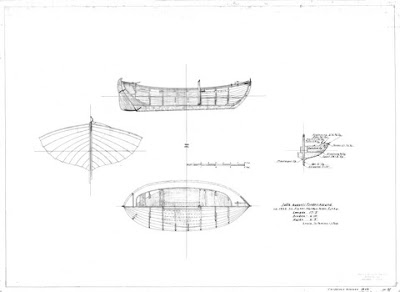 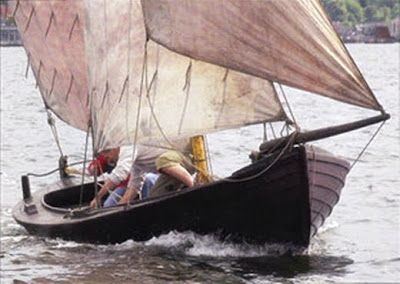 One of several Frederickssund Jolle built by the Vikingeskibs Museet in Roskilde, Denmark, this boat was featured in a piece by Tom Jackson which appeared in the 2009 issue of Small Boats, published by WoodenBoat.
Mr Jackson was rather taken with the boat and proclaimed: "This 17'8" double-ender can stand comparison to the finest of yacht design, and yet this hull comes down to us from an everyday craftsman for a common fisherman." Regarding her performance, Tom says: " She's an amazingly sprightly sailer and a joy to handle. She comes about like a dinghy, with alight touch on the tiller. The jibs have to be backed briefly, but the boat comes about cleanly and with little fuss. She picks up speed right away on the new tack. Her topsail sets and strikes easily, with no specialized gear." 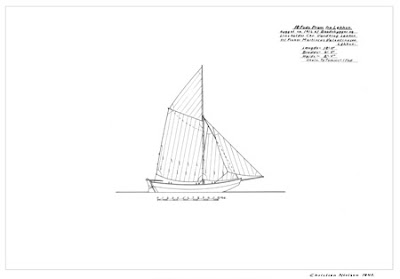 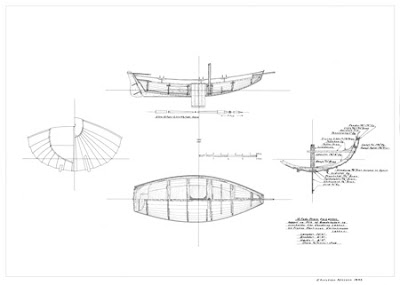 I first found this beguiling and elegant pram in Thomas Gillmer's 'A History of Working Watercraft of the Western World'. The inspired lines of this little boat won me over to the possibility of prams and opened the door to the discovery of Christian Nielsen.
"The structure of this 18' pram is light and strong in the best Norse tradition. As a centerboarder she will perform well and efficiently to windward." She looks to me like good choice for a raid boat, though I might want to alter the sail plan to a lug yawl. Apparently Gillmer was taken with her as well, as he devoted a page to her drawing, above, along with several other Nielsen collections.


Here's my gift to any readers who love traditional boats.
In the late 1930's, as motorized boats began to replace the traditional sailing vessels used for fishing in Denmark, the members of the Danish Maritime Museum recognized the need to preserve the heritage these older types of boats. Both financially and spatially unable to procure representative boats, they decided on the next best thing, to have boats measured and described. With help from the Tuborg Fund, the museum was able to hire a man to survey and comment on the threatened and vanishing types of working sail. That man was one Christian Nielsen, a young boatbuilder with a long lineage of boatbuilding. Typically, Nielsen would take a train to the coastal area in question and then proceed up or down the coast on bicycle to take his measurements and gather local knowledge of the type of boat used in that area. Upon returning to the museum he would use the measurements he'd taken to construct drawings of the boat, leaving us with a valuable legacy. He is, in his way, the Danish equivalent of Howard Chapelle in the US, Edgar March and others in the UK.
Nielsen's work culminated in an archive of traditional workboats from all round the Danish coast. The book of Nielsen's collected drawings along with commentary and other illustrations was published by the Danish Maritime Museum in 1977, and is available (in Danish) from them, as is the CD of the drawings, highly recommended. The English edition, published in 1980 with an introduction by Jon Wilson, founder of WoodenBoat Magazine, is out of print and only available second market. I was lucky to get a copy at a reasonable price. The CD is a little difficult to negotiate, but a source of recurring pleasure. If you are given cash at Christmas, or have a little extra and want to play Santa to yourself, or someone else, the CD is a great collection of drawings from which you can build a boat.
I must say that in ordering the CD, and in general asking questions about the Handels- og Søfartsmuseets I was treated to a rare and gracious experience, special thanks to Thorborn and Heidi. The Danes seem to be very generous people.
A Very Merry Christmas to you!

Posted by Thomas Armstrong at 1:13 AM

You're certainly right. Christian Nielsens woork is very interesting stuff. The book as well as the CD's
I just got the reprinted danish version of Christian Nielsens book for Chrismas - so i might have to thank you as well... ;-)


If one wants to have a peak on the drawings, go to http://www.maritime-museum.dk/english/default.asp find the image search and enter the frase"Christian Nielsen opmåling"

Thanks Thomas. Lot's of Sjogin cousins here. And a very Merry Christmas to you and yours.

I noticed TBH found a copy of Nielson's book, I have been searching for a couple of days on the net and have not found one, am wondering if anyone would have a new rabbit hole for me to jump down.

It might be because you're using the american/english version of his name "Nielson" in stead of the correct danish "Nielsen"
The danish version can be found here: http://www.maritime-museum.dk/shopping/default.asp

For a english version (used) try searchin for "Wooden boat designs: Classic Danish boats" on Amazon. I got 6 hits on amazon.com and 2 on amazon.co.uk this morning.