A VOYAGE OF PLEASURE: the Log of Bernard Gilboy’s Transpacific Cruise in the Boat, “Pacific” 1882-1883 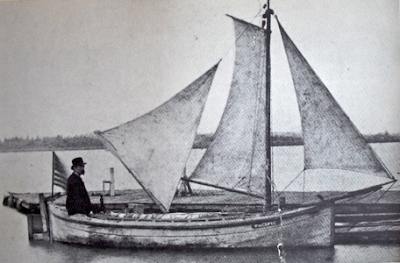 Webb Chiles, author of several books on his sailing adventures may be best known to my readers for his near circumnavigation in an open Drascombe Lugger, chronicled in The Open Boat and which I wrote about here. Webb is an intelligent and gifted writer, poet and photographer, and you can access much of his work at his website. Webb has the laudable distinction of making several of his books available in PDF for free download. Others may be accessed via my amazon bookstore in the sidebar. Today he graciously sent me a heads up about this latest post in his Journal:

I seldom read sailing books any more; but recently a small boat sailor and reader of this journal generously sent me a copy of A VOYAGE OF PLEASURE: the Log of Bernard Gilboy’s Transpacific Cruise in the Boat, “Pacific” 1882-1883.

I had read this slight volume of only 64 pages several decades ago. Naturally I had forgotten many details and found interest and pleasure in rereading it, particularly from the perspective of greater years and experience.

In 1876 Alfred Johnson made the first solo Atlantic crossing in a 20’ dory, sailing from Gloucester, Massachusetts, to Abercastle, Wales, in just under two months, with a brief stop in Nova Scotia.

Johnson named his boat, CENTENNIAL, and said his voyage was to commemorate the nation’s first hundred years.

When I completed my first circumnavigation in 1976, a journalist wanted me to claim that I had done so to honor the Bicentennial. As readers of STORM PASSAGE know, this was not true and I refused. 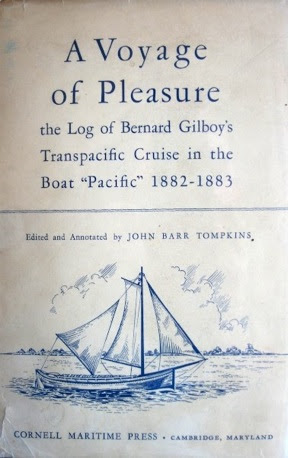 Inspired by Johnson, Bernard Gilboy, a professional seaman, had an 18‘ schooner built in San Francisco specifically for his voyage at a cost of $400. He considered this the smallest boat capable of holding provisions for the five months he thought his non-stop passage would take.

Her length of 18‘ and beam of 6‘ were almost identical to those of my open boat, CHIDIOCK TICHBORNE; but the PACIFIC had a keel and a draft of 2‘ 6”, as apposed to unballasted CHIDIOCK TICHBORNE’s 12” draft with her centerboard up and 4‘ with it down.

Bernard Gilboy's story is also featured in Bill Longyard's 'A Speck on the Sea'.


Is anyone competent enough to comment on this rig?
Posted by Thomas Armstrong at 9:05 PM

Webb is an inspirational figure. I re-read his The Ocean Waits online when I got back from Ibiza and was probably even more amazed at his feat than the first time round.

I think Bernard Gilboy features in William Longyard's A Speck on the Sea, a book I am itching to get my fingers on

Cool post you got here. I'd like to read more concerning this matter.
By the way look at the design I've made myself Russian escort

Just beware of that O'Docker!

Great post Tom,
and hats off to your new "association"