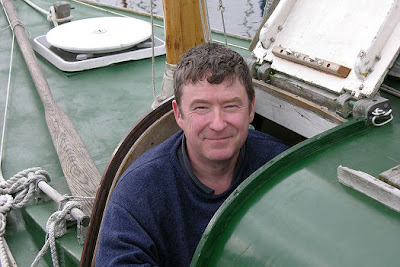 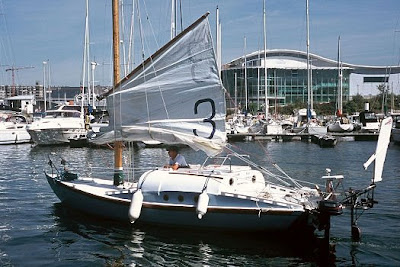 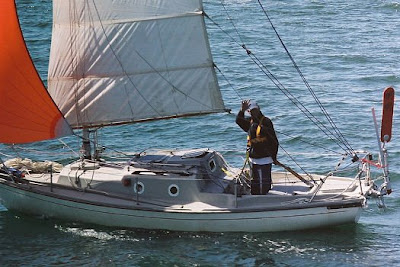 By 1968 Blondie Hasler realised his creation , dubbed the OSTAR, was becoming a monster and contained the seeds of it's own destruction. His vision of a race based on self reliance and simplicity was evolving into the hyperego megabuck superyacht paegent of today. For years he proposed an alternative,  Series Two, to be a 'race' with no sponsor, no fees and no rules, for ordinary yachtsmen who accepted responsibility for their own conduct and believed in their right to cross oceans based on their skills and boats alone, without the authority or help of a governing body. Series Two never really came about. But when Jester was lost a trust was formed to replicate her. Out of this trust came not only the reincarnated Jester but also an antidote to the inflated race Blondie had never wished for. It's the Jester Challenge.  Set to run every four years with a shorter Challenge every second off year, the first Challenge was run in 2006, with an Azores Challenge this year. Next due in 2010, to .

"Those of us who helped to organise and fund the building of the new Jester in the early 1990s, an exact copy of the original lost at sea during the 1988 OSTAR, did so to help keep alive the spirit of Jester and the ideals espoused by Blondie Hasler and then Mike Richey. We have also created the Jester Medal, to be awarded annually from 2006 by a committee of the Ocean Cruising Club for an outstanding contribution to the art of single-handed sailing. The creation of a new single-handed transatlantic race to further perpetuate these values was something we talked about when small boats were excluded from the traditional Plymouth-Newport single-handed races and the fact that it is now happening (due overwhelmingly to the efforts of Jester's new owner Trevor Leek and Blondie Hasler's biographer Ewen Southby-Tailyour) is a significant and welcome achievement."

I’m very much enjoying your series on minimalist sailing and those legendry sailors.
While their boats and equipment may have been ‘minimalist’ that was more than made up for by their spirit of self-reliance.
Your quote of Hasler reply to the safety query about the need to carry a radio transmitter "It would be more seemly to drown like a gentleman" reminded me of something in one of my favourite children’s books, Swallows and Amazons.
When the Blackett children wrote to their father asking permission to go sailing they received the reply by telegram simply stating “BETTER DROWNED THAN DUFFERS IF NOT DUFFERS WON'T DROWN”.
It is tempting to believe that this spirit for self reliant adventure is missing today but one only has to look at the number of entrants there were in this years Jester Challenge to realise that it is still there. It just doesn’t attract the sponsorship and media coverage of the hi-tec races.