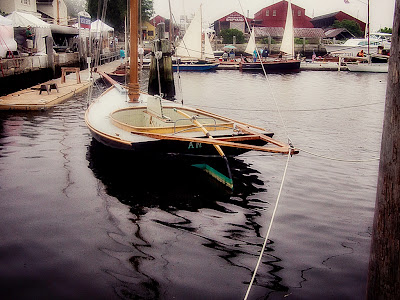 The 28' sandbagger 'Annie' was built by D. O. Richmond about a half mile downriver from the Seaport in 1880 and came to Mystic in 1931 as the first boat in a collection that now numbers over 500 craft. Much more of her story here. 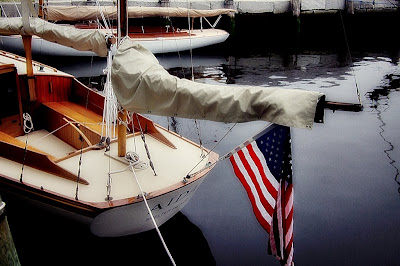 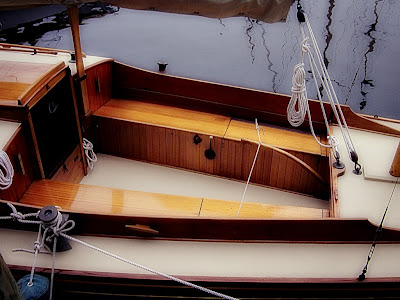 Recently restored by Doug Hylan in Brooklin, ME. More about 'Aida' here. 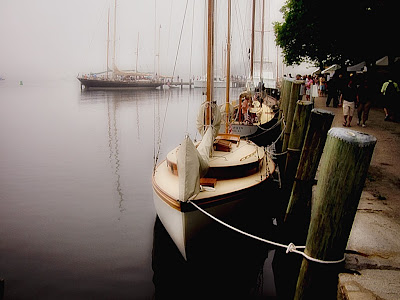 'Aida' is the most recent addition to the Seaport's fleet. There's a beautiful book about 'Aida' written by Maynard Bray available in the Seaport's bookstore. 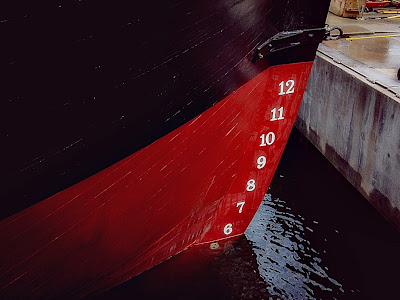 The 'CW Morgan' in the water, on her cradle, "taking up" ie swelling her planks to a tight fit before her launch this Sunday, July 21, 2013. 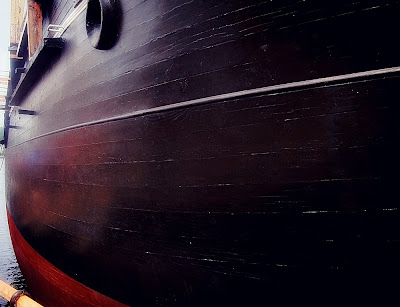 A view to give a taste of the immensity of this ship. 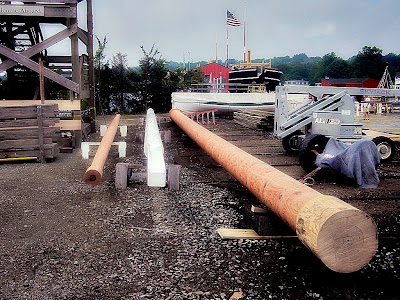 Continuing the theme of immensity, here are some of the spars waiting in the wings for rigging the ship. She'll be rigged after the launch. 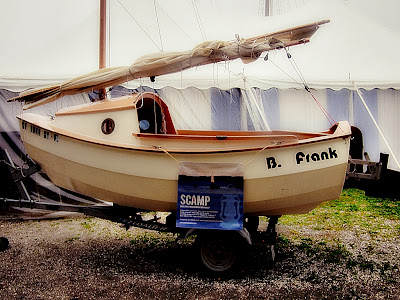 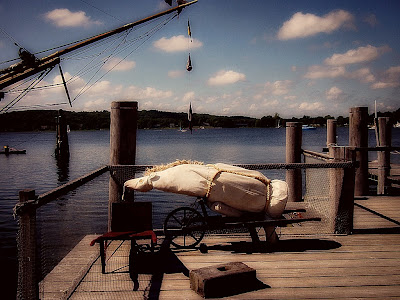 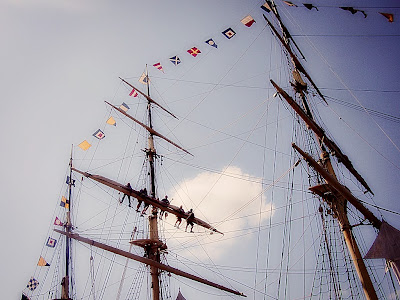 Higher ups aboard the 'Joseph Conrad' 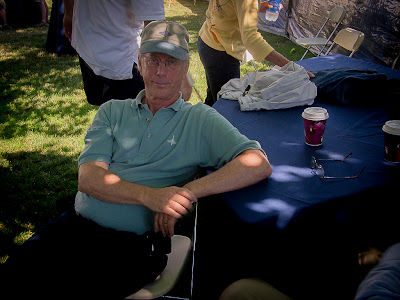 Jon Wilson, the creator of WoodenBoat Magazine. We had a short chat and Jon informed me that while he's still at WoodenBoat almost daily, he is also deeply involved as director of a non-profit called JUST Alternatives which mediates victim/offender dialogue. There is an in depth article about this man with a foot in two worlds from Yankee Magazine, well worth your time. 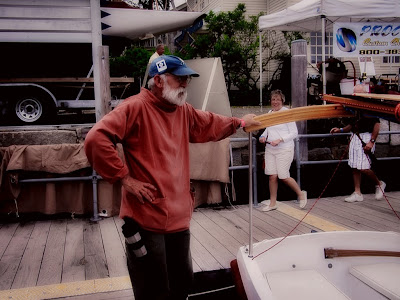 Ben Fuller, "Living National Treasure" ( he'll no doubt hate that). Ben's an avid small boat advocate and member of the TSCA. Ben is the Curator at Penobscot Marine Museum (look into their extensive photo archives) and a former Curator at Mystic. He's also the owner of 'Ran Tan', more of which later. Here he's chatting with John Harris of CLC. 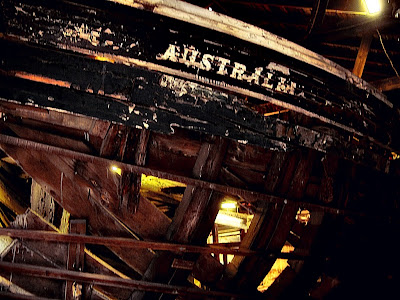 Coasting Schoooner 'Austraila' was built in 1862 on Long Island. She served as a blockade runner based in the Bahamas during the Cival War, and consequentially spent over 60 years in the Chesapeake hauling goods. 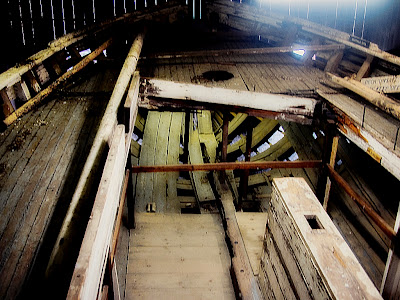 Later she was acquired by the DuPont family as their yacht, and was donated to Mystic in 1951. In 1961 she was hauled for refit but the damage at that time was too great, she was retired to a shed on campus as an educational exhibit. Read more.., 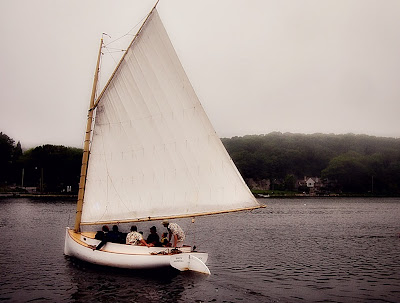 'Breck Marshall' is a reproduction Cape Cod catboat c.1900, built at  Mystic in 1987 and  in use today as an excursion boat for museum visitors. More... 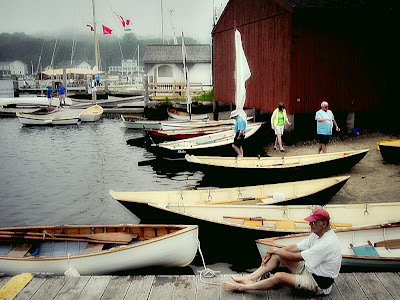 The John Gardner Small Craft Workshop is held most years at Mystic as part of the WoodenBoat Festival. It is situated on Australia beach, adjacent to the 'Australia's shed and directly in front of the John Gardner Small Craft workshop, still in use, building small craft in the Gardner tradition. John was a visionary historian and teacher. He is credited with saving many American small craft from obscurity and as a key figure in the wooden boat revival. He served as Associate Curator of Small Craft at Mystic Seaport from 1969 to 1995. The workshop is held as a collaboration between Mystic Seaport, WoodenBoat Magazine and The Traditional Small Craft Association. 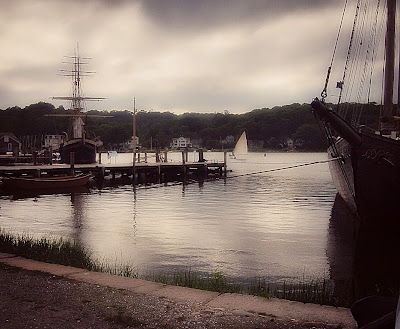 A quick sail aboard 'Ran Tan' 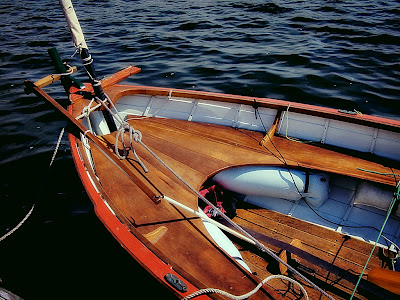 'Ran Tan' is a modified wherry, drawn by Antonio Dias. imagined and owned by Ben Fuller. 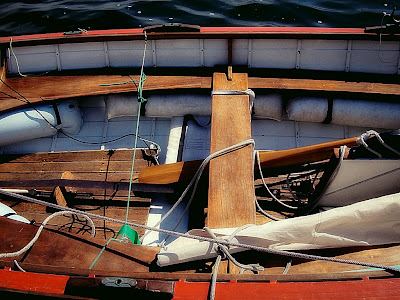 Ben brought 'Ran Tan' down for the John Gardner Small Craft Workshop, which operates a livery under the auspices of the TSCA. Here you can try any of the offered boats, no charge. 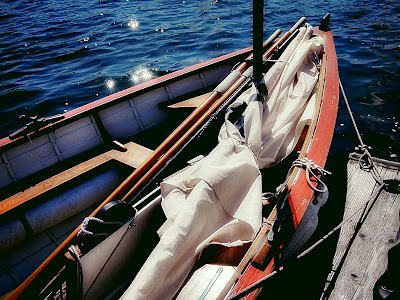 Ran Tan is Irish slang for a sort of walkabout, according to Tony. 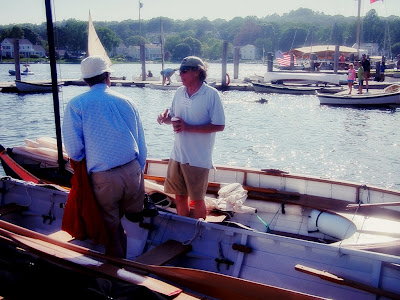 Tony is a friend and invited myself and brother John for a sail. 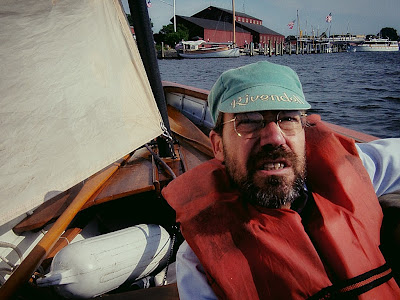 John's duty was to watch for other craft, especially where the sail blocked Tony's view. I, being considerably heftier, was assigned to be moving ballast. The boat is very light (200lbs.), and lively, so I was moving around quite a bit trying to keep her on the flat. 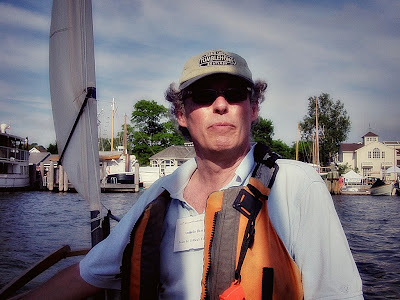 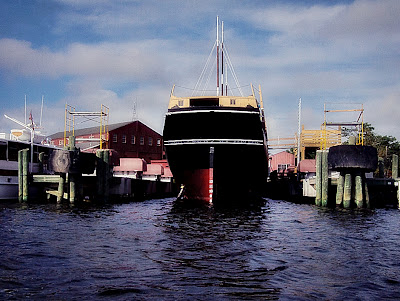 Sailing past the 'Morgan' 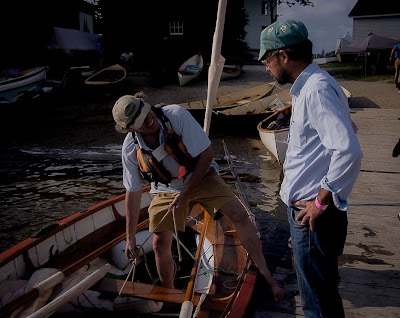 Tony and John back at the dock after a fun sail. I do not have lot's of experience in small craft and it was enlightening. Antonio Dias is a truly multifaceted man, artist, talented designer and writer, take a look at his website. Thanks, Tony. You can read an earlier post on this blog about Tony and his boat designs here.

It looks like Mystic really lived up to it's name in your wonderful photos. Thanks for sharing.

Thank you for such a fantastic blog. Where else could anyone get that kind of info written in such a perfect way? I have a presentation that I am presently working on, and I have been on the lookout for such information. Advisory firms in India | Low brokerage