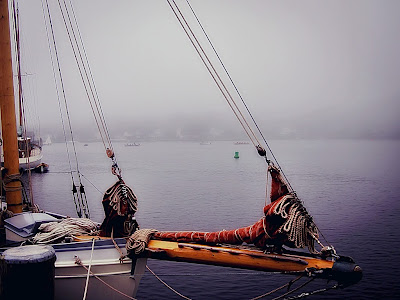 Just below the far shoreline are two horizontal dashes, above the green buoy. That's a pair of St. Ayles skiffs having at it. 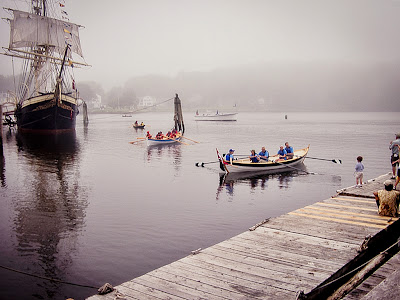 Here they are again, the nearer skiff is Canada's 'Sea Shadow' and an American boat, the 'William H Shipp' is just passing those pillings. At this point the crews have switched boats, I believe.  'The Joseph Conrad' in the background. 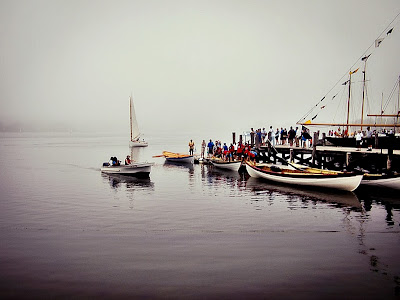 The crews gathered on the docks after racing, with the Apprenticeshop's whaleboat in the foreground. 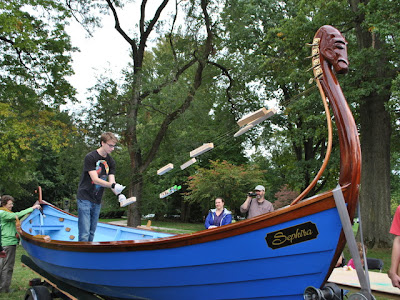 A boat of a different color, the Sephira is a modified St Ayles. Also called the Musical Ark, she is rigged to be played like a harp and sing to whales. Interesting project, to say the least!

As I write this the Skiffie Worlds are in full swing in Ullapool, on the northwest coast of Scotland. The St Ayles skiffs are an Iain Oughtred design, lapstrake ply rowing boats, expressly conceived for the Scottish Coastal Rowing Project. The initial idea was for communities to build their boats and compete with other communities. It took off like wildfire. There are now over 50 boats in Scotland and the project has spread to North America, Britain, Australia, New Zealand and the Netherlands. The boats are built from cnc kits which interested groups purchase and the build themselves. For those who would like to dig a little deeper, there's loads of info here.

The sole competitor at the worlds from North America is an entry from the Lake Champlain Maritime Museum. But she's not the only St Ayles from the US in Ullapool. Also attending, but not competing, is 'Sephira', aka the Musical Ark. I was informed about this project by Alec Jordan, whose company Jordan Boats supplies the kits in the UK. Alec was in Mystic for the show, and though I'd corresponded with him in the past when writing about the project, we'd never met. I also met Gardner Pickering of Hewes & Company, the kit suppliers for North America.  Alec was very keen for me to write about the Ark, as it was defaying some of the expense involved in traveling to Ullapool with a kickstarter. I'm pleased to say that they reached their goal Friday afternoon but are still open for business into tomorrow if you'd like to get involved. This is an "insanely great" project and must see.
Also must see is Alec's report on the North American St Ayles Championship, the pair of boats pictured above, one from Picton, Ontario and the other from the Renbrook School near Mystic.

I Built It Myself 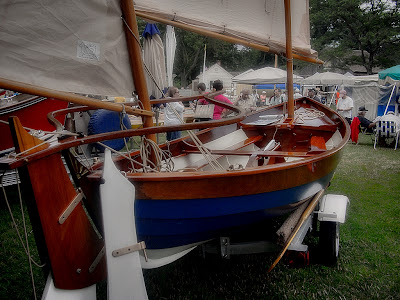 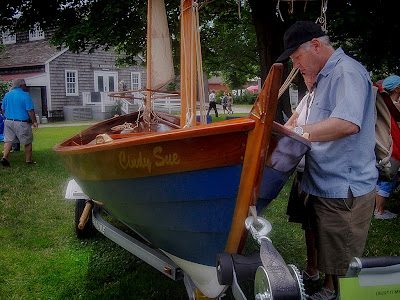 This Oughtred design is a bit slimmer and lighter than a Ness, and a bit faster as well. 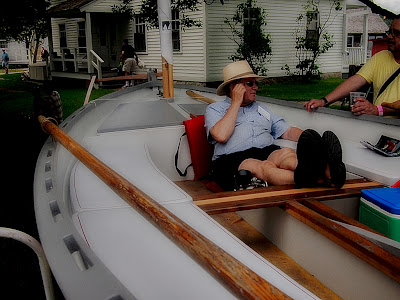 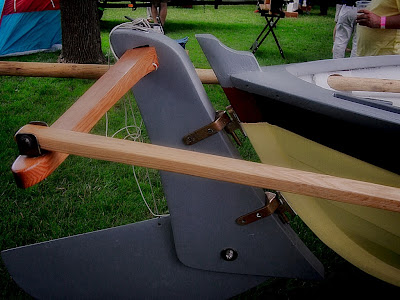 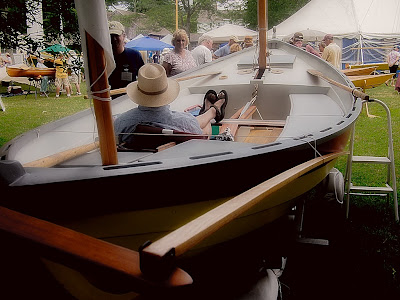 Phil is pleased with the workboat finish, and I agree, better to sail than sand and varnish. 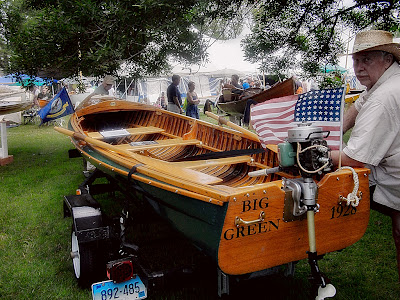 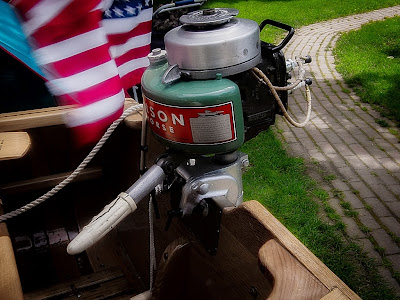 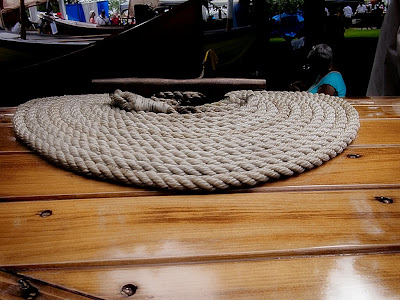 Big Green dates from 1928 and was a total restoration 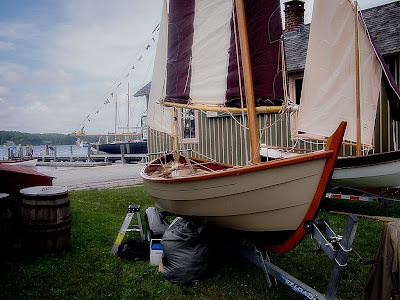 Another Oughtred design, this Ness Yawl was built by Walt Kangas 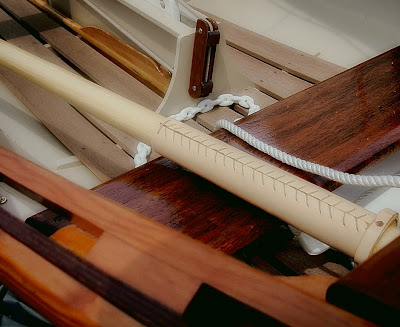 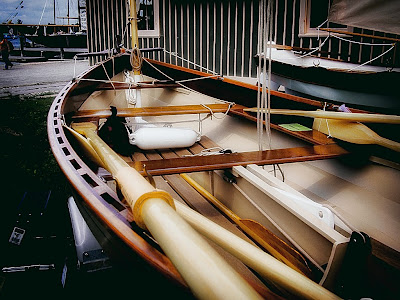 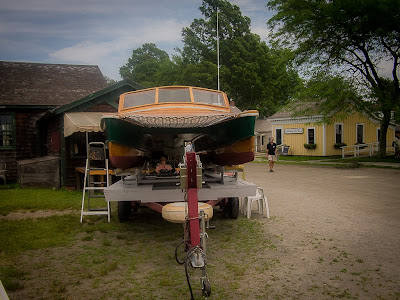 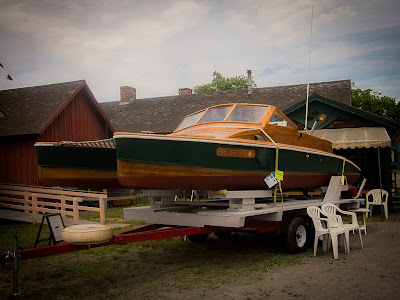 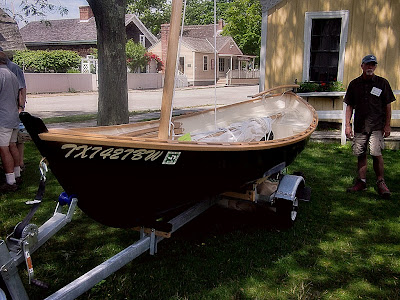 Yet another Oughtred design, this one a Whilly Boat. 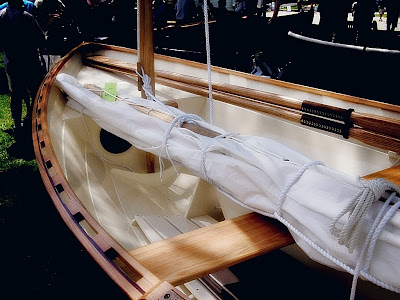 Again we see a sensible workboat finish, this by Aaron Ward who trailed his boat all the way from east Texas.

All photos and text copyright Thomas Armstrong, with the exception of the Musical Ark

Always a favorite of mine at the Festival is the I Built it Myself green. The boats are invariably immaculate and finely detailed. This year seemed to be dominated by Iain Oughtred designs and it's a pleasure to see some of the less built boats such as the Arctic Tern and the Whilly Boat. I've included four Oughtred boats here but there were two or three more. A highlight of this exhibit is the chance to chat with the owner/builders, a pleasure. I'm already curious as to what will show up next year.

originally posted by Thomas Armstrong on 70.8%

Posted by Thomas Armstrong at 9:13 PM

I love those Oughtred designs too. As an owner of an Arctic Tern, I see a lot of talk about them, but few that are actually built. Glad you featured some here.

Glad to see those Oughtred designs featured. As the owner of an Arctic Tern I'm always curious to see how others have rigged them up. There's a lot of talk about his boats, but it's hard to tell how many are actually being used.

Who design the power catamaran build by
Piero Biancani . I love the design !

Who is the designer of the power cat built by
Piero Biancani . Very nice!