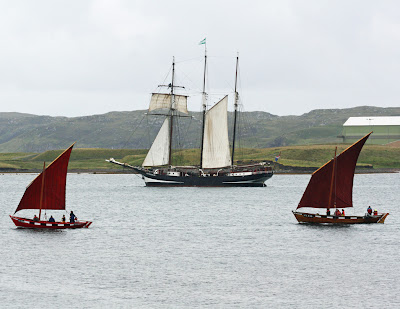 The Dutch three-masted schooner Oosterschelde on a visit to Stornoway for Sail Hebrides. She is being escorted out of the harbour by two traditional Hebridean fishing vessels, Jubilee in front and An Sulaire behind. These two boats were participating in a race as part of the Sail Hebrides Maritime Festival. 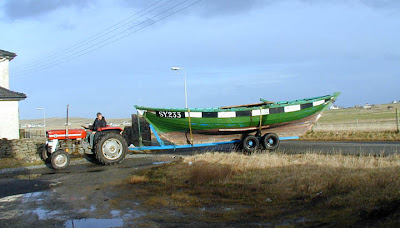 Jubilee arrives at the Old School site in Lionel, Ness where she remained until repairs were carried out in 2005 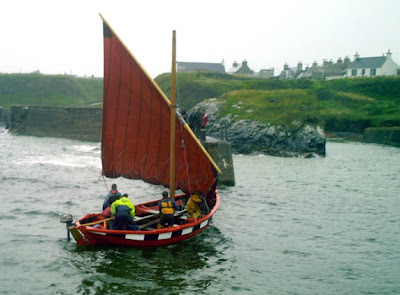 Jubilee makes a welcome return to Port of Ness, where she was originally launched in 1935 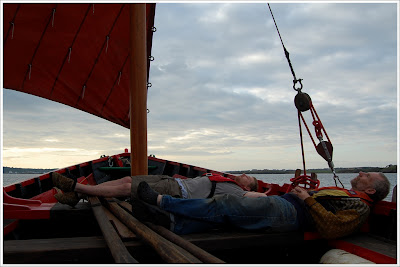 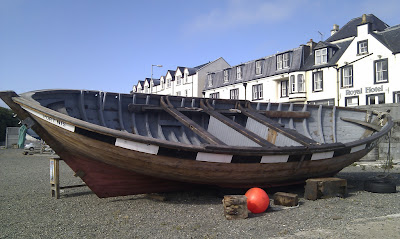 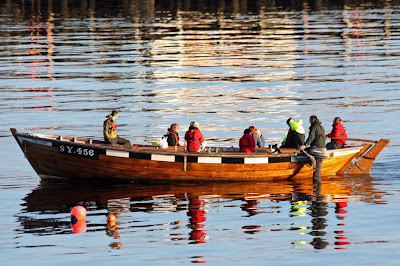 An Sulaire and crew in the inner harbour. 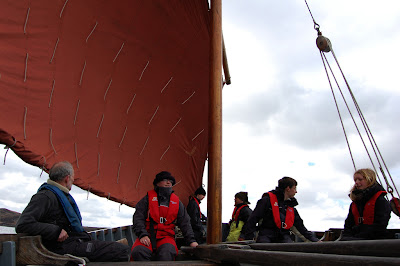 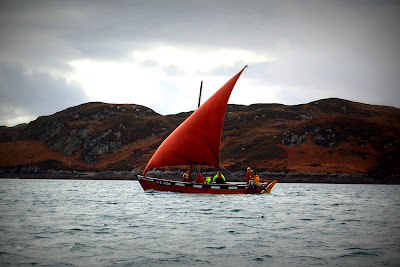 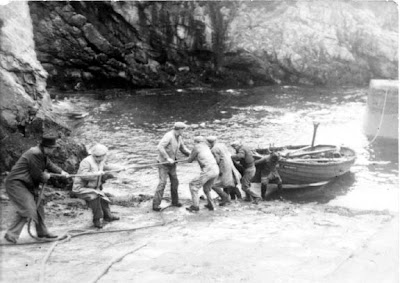 The crew hauling Mayflower up the slipway at Skigersta pier in the early 1950s. Read more about Mayflower here. 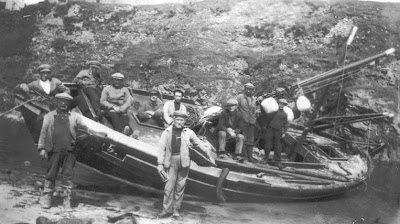 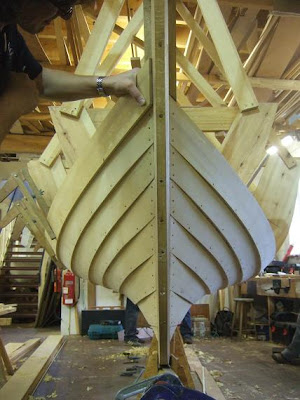 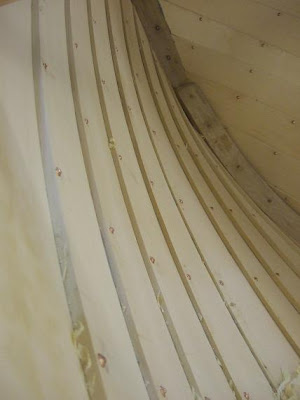 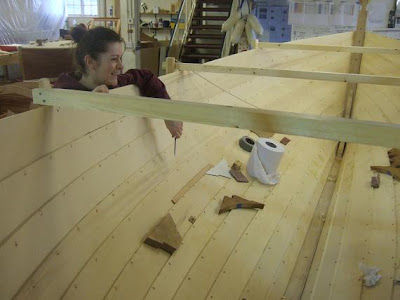 at the Lyme Regis Boat Building Academy in 2009. 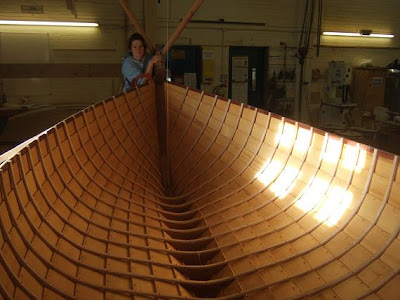 Mairi chose to build a half-size Sgoth Niseach. Full size boats were just over 30', the boat that Mairi built is 16' 6". The translation of Sgoth Niseach is 'Ness-type skiff', Ness being the northernmost part of the Isle of Lewis in the Outer Hebrides where the boats were used for fishing. 'Runag', Gaelic for 'little sweetheart', was planked in Alaskan yellow cedar on oak, the planks and ribs fastened with traditional rose head copper nails.

Sgoth Niseach translates into English as Ness Skiff, at type of small fishing vessels which evolved in the region of Ness, northernmost part of the Isle of Lewis in the Outer Hebrides. They are double ended like their Norwegian ... but have a distinctive large dipping lug rig which some have likened to a lateen sail. I asked Iain Oughtred about his view of the evolution of this boat type and especially that big sail. Iain's reply:

I think the evolutionary process went from the faerings etc, with short horizontal yards, to some later Nordlandsboats, which exended the luff far forward, still with a short yard. Up to about 10-oared boats. Then the Shetland Sixareens and Yoals, which peaked up the yard – though still calling it a square sail, but by now very asymmetric. Very efficient sail, especially in the racing yoals. In Lewis, the yard got even longer, and the sail as large as could be contained within the length of the boat, which was different in being big, beamy, heavy. That yard was really a handful. They must have been giants.

These boats had nearly died out completely by mid 20th century, but some worthy restorations and new builds are keeping their heritage alive.

Jubilee was built in 1935 by John F. Macleod. By 1978 she was in need of restoration, was purchased by a group on behalf of the Ness community, funds were secured and work begun. She was re- launched in1980 at Ness Harbour. Further repairs were undertaken in 1995 to coincide with the building of a new Sgoth, An Sulaire. The 28' Jubilee is currently the ward of Falmadair, the North Lewis Maritime Society.

An Sulaire is a 'new' 30ft. sgoth, commissiond by the An Sulaire Trust, built by John Murdo Macleod, assisted by Angus Smith. Macleod is the son of John F. who built Jubilee. He is regarded as a master boatbuilder and the BBC produced a documentary of the build. She is currently in Ullapool on the Scottish mainland for some repair work.

In 2009 Mairi Macleod of Stonaway was completing her course at the Lyme Regis Boatbuilding Academy. She chose to build a half size sgoth as her final project and was helped by John Murdo Macleod. It's a beautiful boat as you can see in the above photos. After graduating other concerns intervened and the boat is still unfinished, but it back in Stornaway, awaiting Mairi's finishing touches, planned for next summer.

Finally, here's a link to some closely related boats I've written about previously.

A big thanks to Iain Oughtred for his insight.

Posted by Thomas Armstrong at 4:47 PM

I've been reading your blog for a while now, really interesting and well written. I was wondering if you had ever encountered the Gal Gael trust and their highland Birlinn 'Orcuan'? There is loads of write up of her here http://www.galgael.org/birlinn/. She's just back in the water two months ago after i finished repairing her.
Ben Duffin