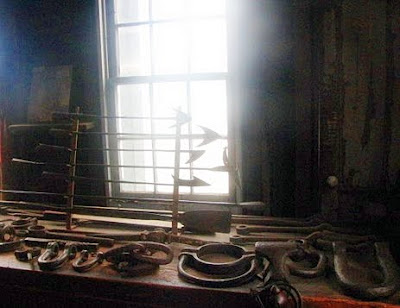 Harpoon points in the window at the Ironmongers Shop, Mystic Seaport. 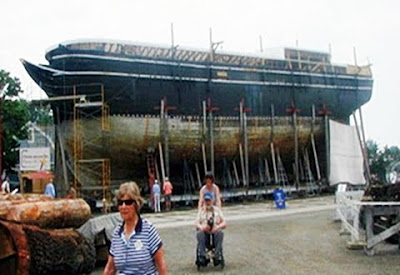 The centerpiece of Mystic's restoration projects, the Charles W Morgan. Billed as the last (traditional) whaling ship in the world, the Morgan is projected to be on the water by 2012. Ambitious. 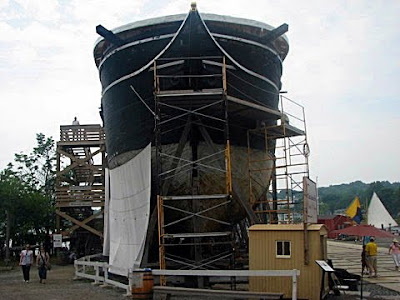 Seeing the boat from the ground up, she appears enormous, immense. 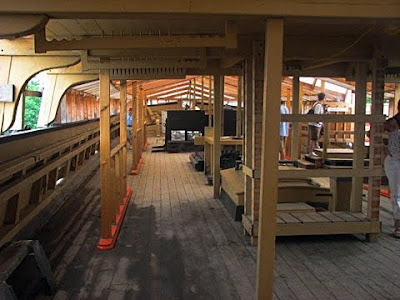 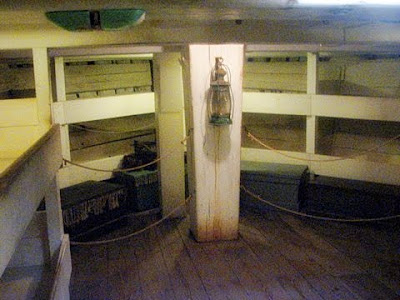 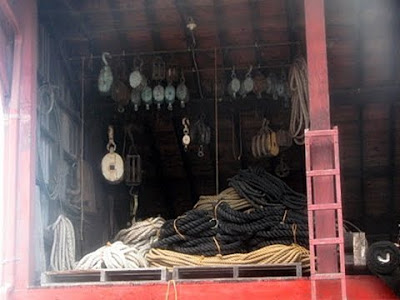 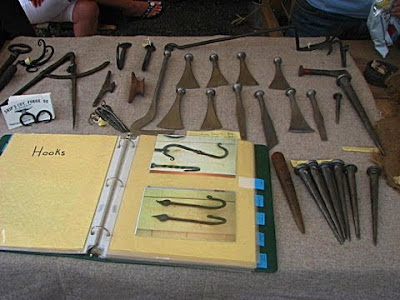 At the show John and I met vendor Met Chandler, well really his wife Mo, Met does some interesting maritime blacksmithing. Located in West Chester PA, about 20 minutes from my home, I'm sorry to say they are in the process of moving to NH, though that probably makes sense for them. Met offer's hand forged sail hanks, caulking irons, marlinspikes and rigging knives, among other items. Nice work. Web presence here. 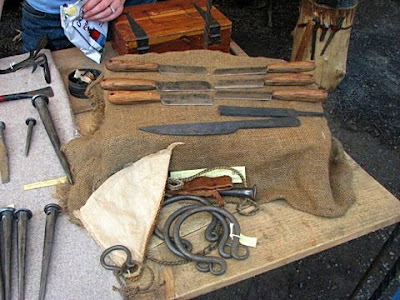 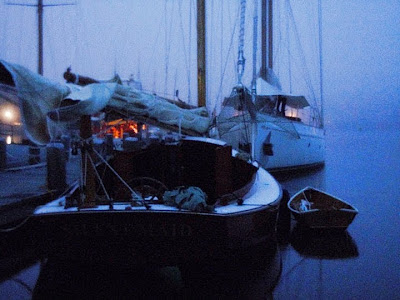 Someone from Beaton's Boatyard, Tom or Suzanne, took this wonderful photo of Silent Maid. 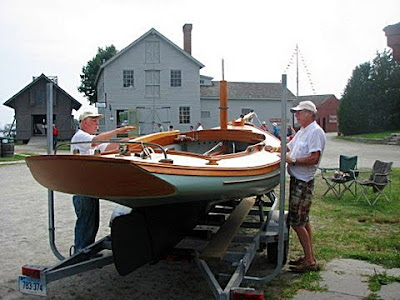 Kingston Lobster Boat built by David McCullouh. David
allows he's built 13 or 14 boats. You can view several of them here. 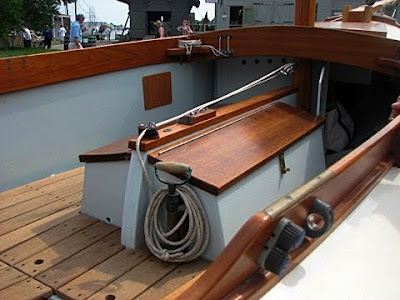 Apparently there are plans available both from Mystic and the Smithsonian under the name Annie B Fuller
I think this photo is of the fish well, probably filled with lobster in the working boat. 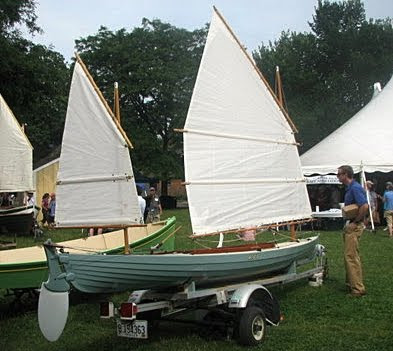 This rather compelling canoe yawl was there on Saturday, gone on
Sunday. 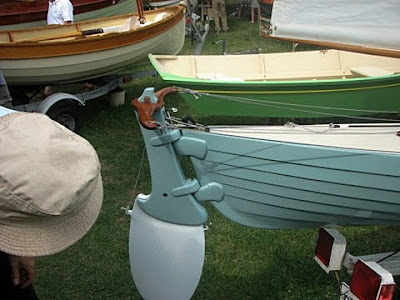 Named Kit, there was no info and I never found the owner. Here brother John inspects the rudder. 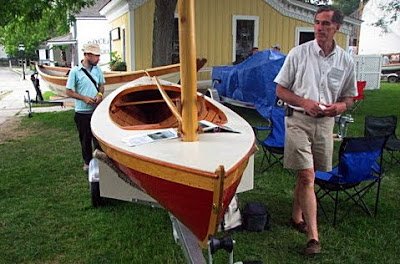 Working our way through the IBIM display ( I built it myself ), John and I chanced upon Brooke Hayward and his Delaware Ducker Wooduck. 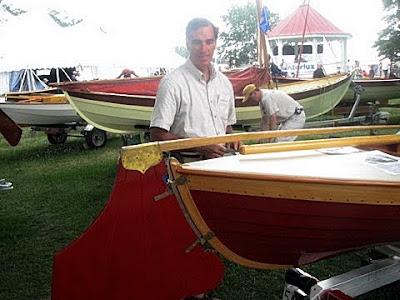 John and I had met Brooke at last autumn's MASCF, held in
St Michaels Md, at the Chesapeake Bay Mariime Museum. 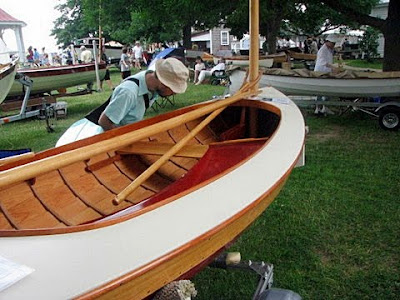 At that time, Brooke was planking the boat in the museum's boatyard. See that here. You'll need to scroll down a bit. As opposed to many of the boats we saw at the WBS,Brooke, very sensibly decided to finish his traditionally planked lapstrake Ducker with ply decks covered withe painted canvas which give a non skid surface at lower cost. This is the approach I would take for any boat I might build. 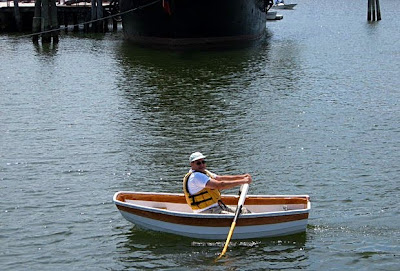 And finally, here's Steven Bauer's little IO designed HumbleBee, lauchned at the boat show and undergoing her sea trials in the Connecticut River. She'll serve as tender to Steve and his lovely wife Michelle's Al Mason designed Ostkust, sailing out of Portland, ME. Steve and Mary, friends of Russ and Julia Mannheimer, were at my table for the Iain Oughtred Tribute and it was a pleasure meeting and talking with them.

That's all folks, pretty much a wrap on my weekend at the WoodenBoat Show at Mystic Seaport for this year, stay tuned for next. I was enthralled by my weekend in Mystic. This is a great boat show, and some of the nicest people you'll ever meet. Kudos to WoodenBoat for sponsering and Mystic Seaport for hosting this event. I got my money's worth and a lot more. Please, if it's relevant to you, support WB with a subscription and Mystic Seaport with a membership. I plan to be there next year and I hope to meet you there.

An aside here. My fellow blogger and good e-friend Michael Bogogger has been elected or appointed president of the National TSCA, the Traditional Small Craft Association. This is a rewarding group to be a member of. I'm not a joiner or club type, but the TSCA is unlike any 'club' I've ever run across. For the small boat enthusiast in the US, there is no parallel. If you are resident in the US, and you like small boats, please join.

Posted by Thomas Armstrong at 12:49 AM

Nicely done, Thomas. Once again, you found really interesting things where no on else was looking.

Thanks for the nice picture and stories. Well done. That event seems worth a visit. To bad this would mean a transcontinetal flight for me.
Peter