A gathering of the Clan, WoodenBoat honors Iain Oughtred at Mystic Seaport 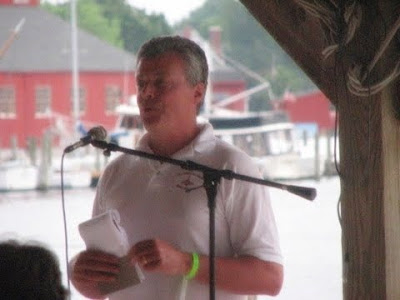 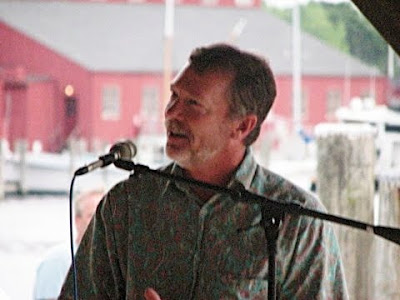 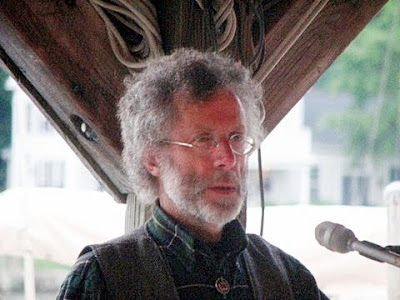 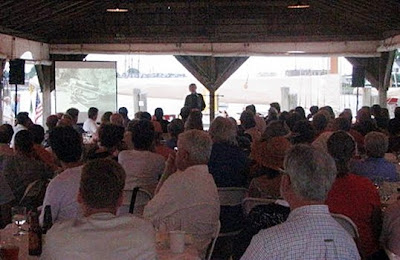 A nice turnout, many of these folks are builders of Iain's designs 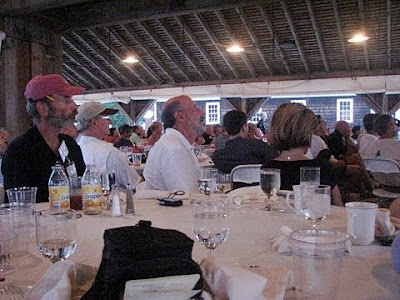 I sat with my friends Russ and Julia Mannheimer, made some new ones as well, in particular, and out of view to the right, were Steve and Mary Bauer of Portland ME, owners of an Al Mason designed Ostkust, for which they just launched an Oughtred Humble Bee pram, as tender to their boat, at Mystic. Photo in a later post. 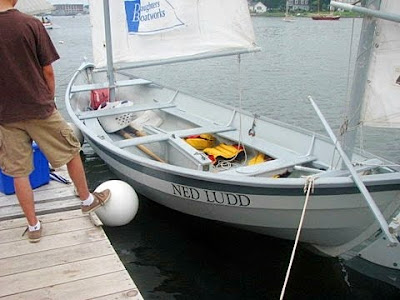 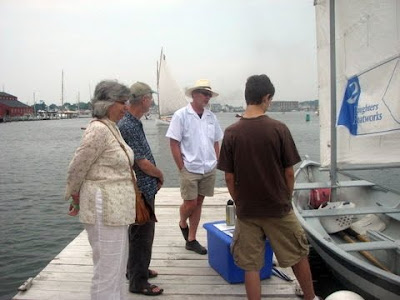 Geoff answering the endless questions, all part of being there. 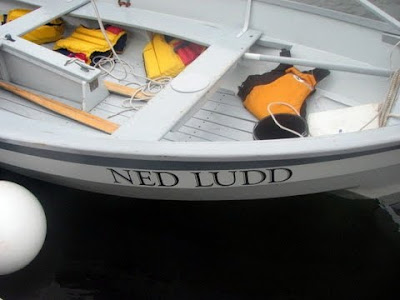 Geoff's Caledonia Yawl is named for an historic British character, Ned Ludd, possibly originally Ned Ludlam, whose reaction to the industrial revolution was taken as a rallying point for those whose way of life was being radically changed and challenged. They became known as the Luddites. 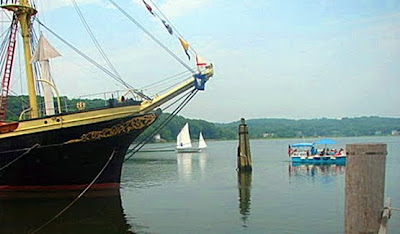 Geoff and Ned Ludd out in the Connecticut River 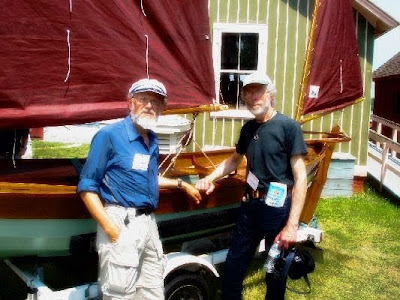 Andy Kitchen and Iain Oughtred with Andy's J II, named for Iain's mother and which morphed into the Arctic Tern, hands down my favorite of Iain's interpretations of the Shetland Yoles 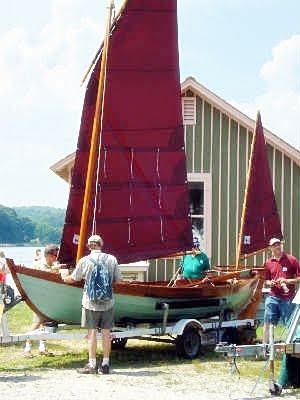 During the two days I spent at the show, I never walked past Andy's boat without there being a few admirers. 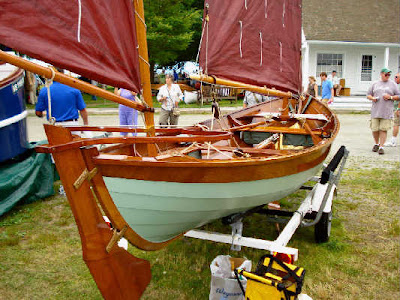 No doubt because she is such a lovely boat... 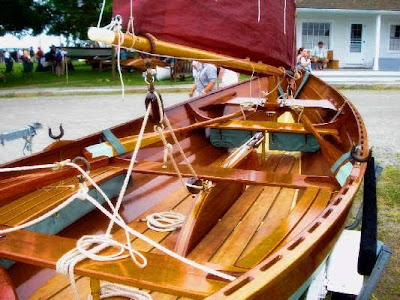 A tribute to both her designer and her builder 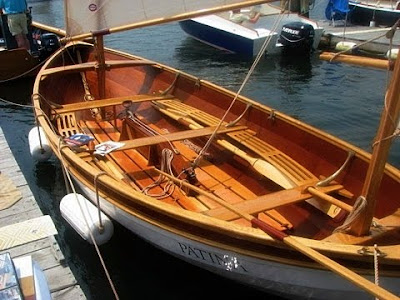 Here's Ed Segen's Patina, a Caledonia Yawl meticulously finished, down to his cast bronze knees in the shape of a whale. A beautiful boat Ed sails out of Wilton, CT just across the river from Mystic. 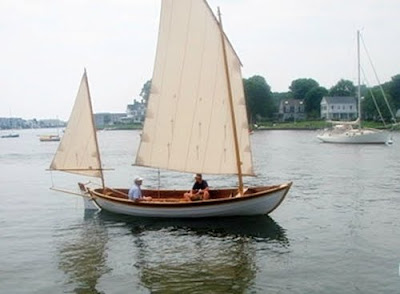 Ed allows he spent about 1250 hours bringing his boat to life. 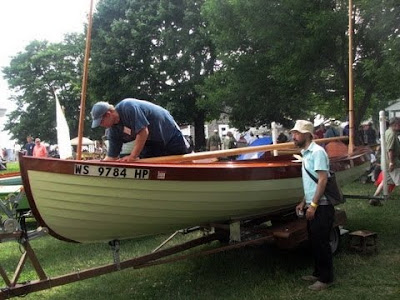 A less commonly built Fulmar, trailed in from WI , this boat is a work in progress. The work is being done by Dave Tilley and his son Eric. My brother John looks on as Eric demonstrates... 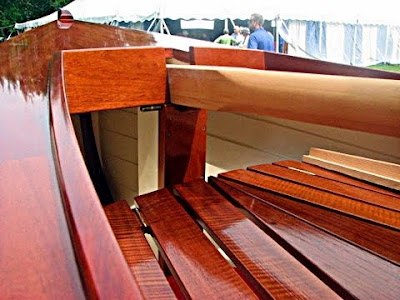 ...an ingenious innovation for raising and lowering the mast, similar to a tabernacle, except the mast is full length and rotates on a pin set just below the deck. The foot of the mast slides along a little track in the bow as the mast is lowered. Dave's invention allows for easy singlehanded mast manipulation. The beautiful finish was achieved using Le Tonkinois. 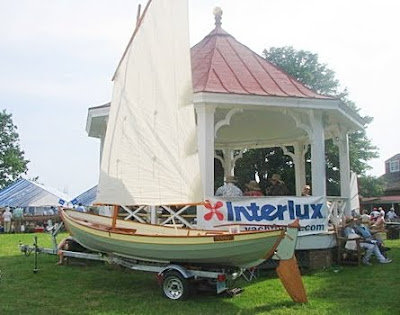 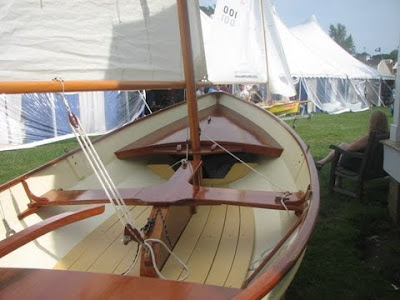 Annie was built and is daysailed and camp cruised on the Connecticut River by her owner, John Denunzio of Durham CT

The 19th WoodenBoat Show, sponsored by WoodenBoat Magazine was again hosted by Mystic Seaport. This was my first WBS and it was great fun and a bit overwhelming. The honored guest this year was one of the worlds pre-eminent designers of small craft for home builders, and one I hold in the highest esteem, Iain Oughtred. Undoubtedly best known for his seaworthy double enders based on traditional Scottish boats with a Scandinavian heritage, Iain's work spans a long career and a wide range of boat types. Not only does Iain continue to publish new design's, he is constantly revising and tweaking older designs to make them better.
Saturday last was the night for the tribute dinner for Iain. It was this event which, at the last minute, pushed me over the edge to commit to going to the event. Glad I did, it was well worth it. First up was Matt Murphy, editor of WoodenBoat Magazine, with some anecdotes and introductions. Next, Geoff Kerr, an early builder of the Caledonia Yawl, explained how building this boat ignited the fuse to an explosion of energy which resulted in his transition from a suburban McLean VA corporate worker bee to full time boatbuilder. Geoff now does business at Two Daughters Boatworks in Westford, Vermont. Geoff visited Iain at Struan Cottage, Isle of Skye and desribed the journey as "two planes, two trains and a ferry". He also allowed it to be an insightful and productive meeting of the minds. Geoff then courageously took a mystical tack, describing Iain Oughtred as a 'Wizard' at finding the essence of traditional boats and bringing them forward and making them accesible to the backyard builder using modern techniques. Geoff ascribed this ability to a sort of genetic memory, and challenged the audience to deny that everyone there probably had a bit of Norse or Scandinavian blood in their ancestry. No one spoke up.
Iain took the bait, and agreed, in his talk, that he thought Geoff was on to something. Then he went a bit further and recounted that many years earlier, while touring Norway in his beat up VW van scouring the countryside for examples of traditional workboats, he heard a voice impelling him toward his future. The voice, whether from his own subconscious or the muses, simply said "you need to work with boats". I do not discount this phenomena, having on at least two occasions had a similar experience.
Iain then went on to offer a brief synopsis of his evolution beginning with his building/racing career at a very early age in his native Australia and culminating in his currently vibrant achievement as a one of the foremost designers of neo traditional boats in the world accompanied by a relevant slide show. His talk concluded to vigorous applause!
Much to my pleasure I was able to have a few words with Iain, and brother John kept running into him on Sunday.
As you can see in the photographs above, several devoted builders were compelled to bring their Ougthred boats to the event, both within the I Built It Myself exhibition and at large. The folks above are only a portion of the Oughtred boats present in Mystic. A very rewarding weekend and not one to be soon forgotten.
I'll be writing about other highlights of the show very soon.

Posted by Thomas Armstrong at 5:00 PM

Iain is rather Gandolfian, isn't he? Love that man and all he's done for us.
I think you should do a profile on your faithful friend and brother, John.

Michael, good to hear from you. Brother John is currently semi- employed at the Historical Society of Pennsylvania. He's also recently been doing good things at the Independence Seaport Museum,archival and otherwise. He's right now at a farm school near Amherst, MA with some friends, checking into some possibilities.